The show's cult-like fan base will do what it takes to get to Olivia Pope. 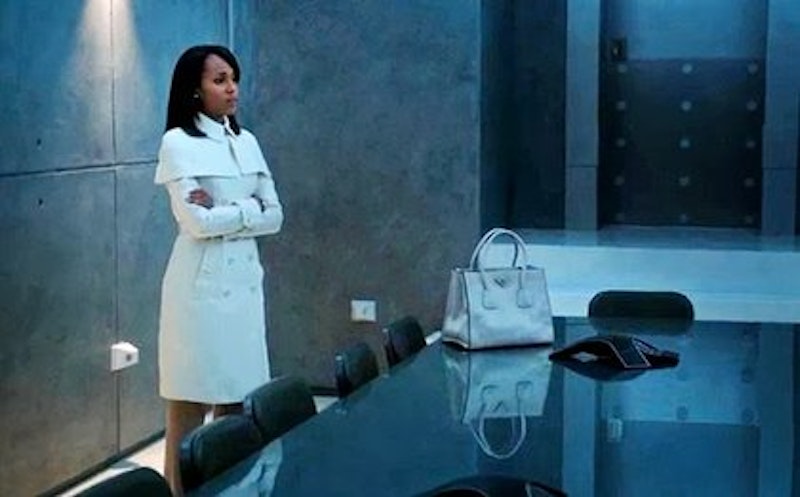 Scandal is the one show I do not miss for any reason. I watch most shows online after they air, which networks don’t really like because their business model is to get us to drop every thing we’re doing and plop down in front of the TV. And I’m not the only one. Last week a friend of mine texted me that he took a cab home from work instead of the subway because he didn’t want to miss Scandal. Later he told me that he fell running up the stairs to his apartment trying to get inside before nine p.m. Hilarious! With the way people lose their shit over Scandal every week, Shonda Rhimes must run ABC. Or she should anyway. Somewhere between the first season to now, Scandal has fostered a cult-like fan base that will do what it takes to get to Olivia Pope.

Here are six reasons Scandal is the best show on television.

Kerry Washington’s role as fixer Olivia Pope wouldn’t be complete without her banging hair. Seriously, her hair is actually one of the main characters on the show, if not the real star. As Washington D.C.’s most powerful lawyer, Miss Pope often finds herself in some sticky, fast-paced and fast-walking scenarios. But no matter what, her hair is always together, bouncing for the GODs. Like on last week’s episode right before her client was about to go on air and lie during a press conference, Olivia got in her face and the camera closed in on the scene. But all you noticed was how crisp Olivia Pope’s swoop was. Girl, get it. Black women and fabulous black gay men all over the United States are trying to figure out what salon she goes to.

The one thing that came out of the premiere of Season 3 was Olivia Pope’s Burberry coat, which was on all the blogs the very next day. It wasn’t just the white coat itself, but framing and the build up to the white coat that made it pop off. She had just been through something traumatic and she reached into her secret black safe and pulled out a secret black folder, opened it and dialed a secret number and gave the person on the other end a secret password. Ooh! The very next scene she’s storming through some underground bunker, walking fast, hair just bouncing around but still in check, and she’s wearing that white coat. It was a moment.

3. A Positive Portrayal of Black People

Scandal is the one show on television that presents black people in powerful, non-stereotypical roles, probably because it’s produced by a black woman, another rarity on television. The black characters on the show aren’t big booty hoes, they aren’t comedic relief, they aren’t wheelin’ and dealin’. They’re just a bunch of bougie black people and I am going in for it! Olivia’s dad is the head of the CIA and is running all kinds of shit, and even though Olivia’s role is as a “fixer”—which has traditionally been the only role available to black women in television and film—you get the sense that she is in total control. Do not question Olivia—“It’s handled.”

One reason you have to watch Scandal right when it airs is because if you don’t, the episode is going to be spoiled for you by all your friends on social media. So I’m sorry if you’re Facebook friends with me and I basically blow up your Newsfeed every other second on Scandal Thursday, but I’m not the only person doing it! The social media, live-tweeting live-status-updating piece is one of the best parts of the show: you’re joining a robust community of Scandal watchers, such that you will always have something to talk about when you go to cocktail parties. It’s great because if the person you’re talking to says, “Yes,” you can gossip and kiki over everything that’s happening. And if the person says “No,” why it’s now your mission to convince them to go home right away and cut it on! We have to keep our black actors on the air!

5. There Is Some Serious Shade-Throwing

No fast-paced drama is complete without some serious cattiness and shade-throwing, lines that stick in your head forever. On last week’s episode alone we had the following gems: “Great, now we’ve got a bimbo on the loose”; “Pick up your menu, order your meal and tell me about your day”; “How presidential are my balls now, Cy?”

I love hot white guys, and there are some seriously delicious specimens on the show. Although, it’s maybe sort of problematic that Miss Pope only dates white guys?