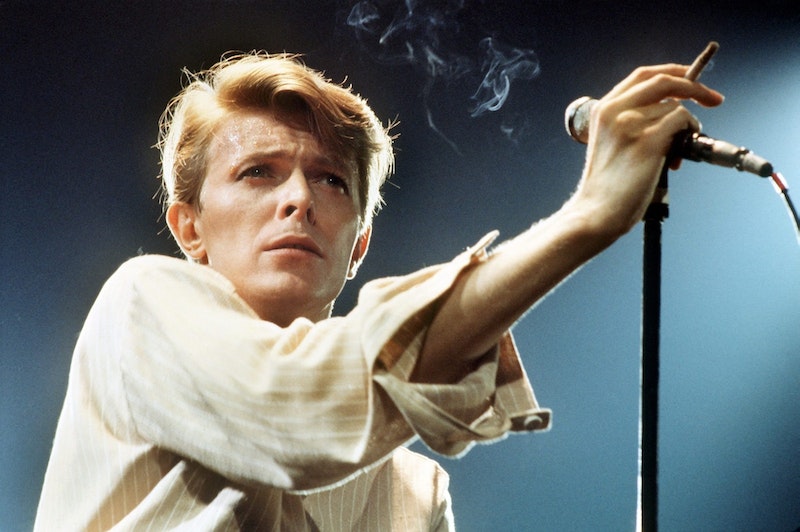 Moonage Daydream, the new David Bowie “experience” by Brett Morgen, has the worst word-of-mouth this year besides Alex Garland’s Men, which vanished without a trace. I was looked forward to what Michael Gentile, a Bowie fan for decades, had to say; he was seeing it in IMAX in Manhattan, and along with several friends of mine that saw it huge in nearby suburbs of D.C., he was disappointed. None more than author Joe Hagan, who tweeted that he walked out “in disgust.” Even the person that convinced me not to skip it in theaters made a number of qualifications, and after a broad rundown of what was and wasn’t included, I decided to go and see Moonage Daydream, one day, at some point.

My dad and I were going to see it opening weekend, but after Michael’s review, we waited. Everything after that lowered my expectations. Last Thursday, after sitting through most of Blonde’s 166 minutes, I was happy to take a break for an illustrated Bowie Wikipedia article. No matter what Morgen says, and no matter how good his Kurt Cobain documentary Montage of Heck might’ve been, Moonage Daydream is a clip show. 142 minutes of meticulously worked-over photographs, television interviews, live performances, candid footage, piles of stems and sounds gathered from Bowie’s massive estate. Cobain lived a comparatively brief life, and produced far less material than Bowie—you can make a feature length movie about him and not compress too much.

Morgen’s film has so much to work with, and so little time: after a brief growing-up bit, the movie skips straight to Ziggy Stardust, zooming past half a dozen albums and far less successful personas. The film’s most glaring omission is Bowie’s wife Angela and their son Duncan Jones, who are completely absent. They were married through most of the 1970s, but you’d never know it here. Then again, that was probably Bowie’s experience of it all; the movie does spend significant time on Bowie’s cold and non-existent relationship with his parents, along with his (pre-Iman) aversion to intimate relationships and living with another person. It’s easy to forget watching these oh-so-charming interviews with a man who’s abandoned his family. But that was his experience: he didn’t know or care if they were alive.

If Moonage Daydream is the “experience” of being Bowie (Morgen said he approached it this way because of other comprehensive Bowie documentaries like the BBC’s Five Years), why are a number of years and albums omitted? Given access to Bowie’s archives, the most exciting thing Morgen offers is… “Love Me Do” at Earl’s Court with Jeff Beck singing backup vocals. Wow… what about Station to Station? I understand a family-approved documentary eliding Bowie’s drug use, but Moonage Daydream doesn’t, using long stretches of the 1974 tour doc Cracked Actor, with Bowie rail-thin and afraid of cops following his limo as he snorts involuntarily.

So if that messy stuff—messy stuff everyone knows about—is there, why isn’t there more music from that period? The mid-to-late-1970s are some of Bowie’s best years, and although the Berlin era’s covered, Lodger is neglected (as always). But I’m nitpicking about what was abridged and what wasn’t, and if Moonage Daydream were successful on its own terms, it wouldn’t matter as much. I think it’s bizarre that perhaps the most audacious artistic statements Bowie ever made—releasing an extraordinary “comeback” album two days before he died—is left out, even if the music video for “Blackstar” is featured at the end. Regarding the “experience” of being David Bowie, wouldn’t having a heart attack on stage in 2003 be at the top of the list? None of this stuff is brought up, and while I’m not looking for dirt, I’d like something new. Moonage Daydream has nothing new for anyone who knows anything about David Bowie.

But it’s not bad. Don’t get your hopes up. It’s a clip show, an illustrated Wikipedia article, but a pretty one. People who know nothing about Bowie will like Moonage Daydream more than anyone else, because it’s essentially a 142-minute advertisement. Never trust any film that ends with the main character saying, “I’ve had a pretty amazing life” without a hint of irony. Bowie lived a compelling and interesting life, and Moonage Daydream, in all its splatter, reduces him to the size of a stamp.