Andrew Dominik’s Blonde is a dumb, disgusting film that doesn’t understand its subject. 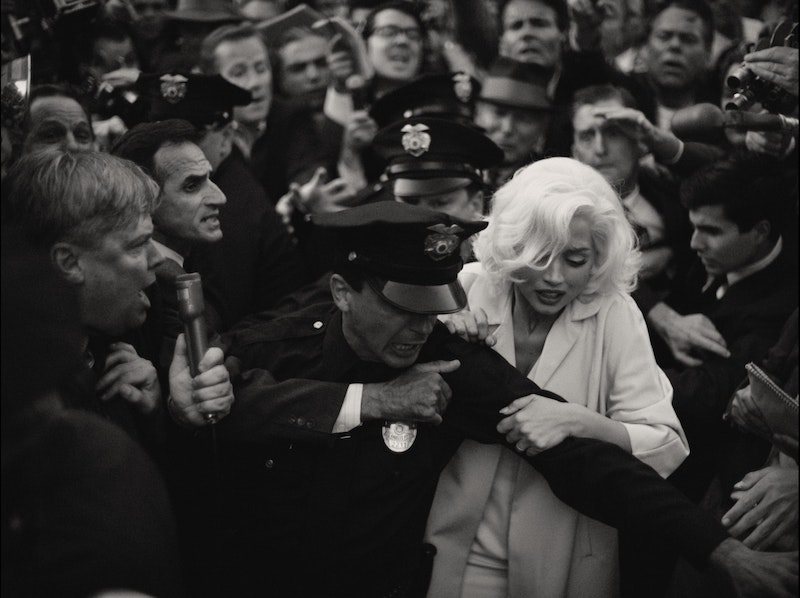 The advance promotion of Blonde, like Elvis, emphasized Ana de Armas’ “transformation” into Marilyn Monroe. Her accent slips several times, but she’s good in an otherwise hopeless movie. Elvis may have been overstuffed and far too manic, but it’s a movie that I keep thinking about, one that grows stronger in my mind since I saw it in June. Baz Luhrmann reveres Elvis; the most moving image in the film is a jet flying into Heaven when he dies. I was thrilled that there would be no toilet, no lingering on the jellybean jars full of uppers, downers, tranquilizers, and painkillers.

You don’t have to love or even respect someone in order to make a film about them, but Dominik’s proud ignorance of large swathes of Monroe’s life are galling. Speaking to Christina Newland for Sight and Sound: “She’s trapped in our memory of her and trying to break out of it. It’s a movie about the unconscious. And we only know as much as she does because she’s essentially living an unexamined life.” In this “unexamined life,” adapted from Joyce Carol Oates’ 2000 novel, Monroe never learns anything, never makes any friends, always makes the same mistakes and is always alone. (Where’s Jane Russell? Paula Strasberg?) In Dominik’s Blonde, de Armas plays Monroe like a scared little puppy, and barely articulate.

It’s not a bad performance, but this is no Elvis. Austin Butler did more than excellent imitation, he became Elvis Presley. This version of Monroe, which Dominik admits is derived exclusively from him and Oates’ novel, never understands anything happening to her or what’s going on, and because we see her life through these distorted eyes, everyone comes off like a vulture. Even if they all were—20th Century Fox, Joe DiMaggio, Arthur Miller, John F. Kennedy—Blonde makes Monroe look too stupid to try to fix her life, when that wasn’t the case. She never asserts herself here, or doing what she actually did in life: make friends and produce films, however briefly (Where’s Bus Stop?) Bobby Cannavale is no good as Joe DiMaggio, Adrien Brody is typically excellent as Arthur Miller, Julianne Nicholson is terrifying as Monroe's mother, but no one has substantial screentime other than de Armas.

Dominik told Newland that, for him, Blonde is about, “the meaning of Marilyn Monroe. Or a meaning. She was symbolic of something. She was the Aphrodite of the 20th century, the American goddess of love. And she killed herself. So what does that mean?” It means you haven’t done your homework, or didn’t care, or are too dumb to make anything other than a boring and misogynistic cinematic slog that never rises above injury. It’s a poorly made film, with constant color and aspect ratio shifts that appear completely arbitrary, but in that same interview, Dominik clarified that, “There’s no story sense to it. It’s just based on the photographs. So if a photograph was, you know, four by three, then we do it four by three. There’s no logic to it, other than to try to know her life, visually.”

Abiding by the measurements of found footage and photographs is not the way to understand a person’s life through cinema, even a superstar like Monroe. There are piles of iconic images of her, but this is a 166-minute movie, and its aspect ratio and color shifts are disruptive and unsuccessful in practice and conceptually stupid. What makes Blonde so disgusting is that it’s a “rescue fantasy” (by Dominik’s admission) that does nothing but flay the person it purports to save, not through the succession of horrible events in her life, but in its proud ignorance of her life. Monroe was tragic, but she was so much more than Blonde shows, just as a public figure.

Unlike Dominik, I like most of the movies Monroe appeared in, particularly Don’t Bother to Knock. The audition scene for this movie is de Armas and Blonde’s only powerful moment: an intense reading of a monologue mirroring so much of Monroe’s real life. A life story told through the filter of an actress playing an actress auditioning for a real movie from 1952. Blonde never gets deeper than that.