In the impoverished landscape of commercial cinema, Barbarian is an ideal place to take refuge. 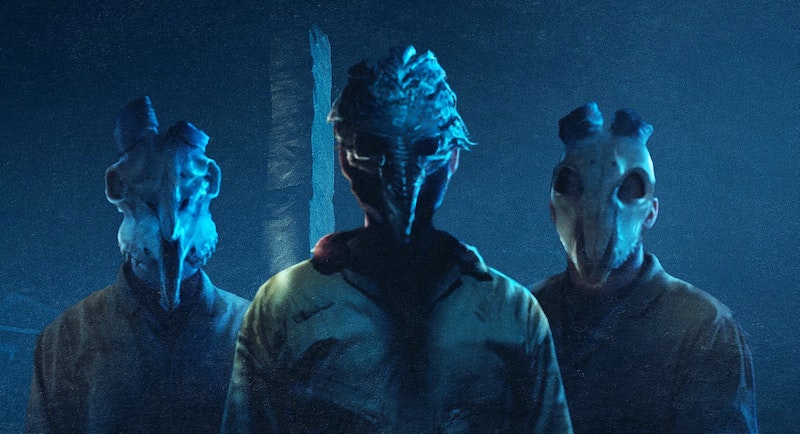 It’s Halloween season, which means dusting off that Shudder subscription I keep forgetting to cancel and excavating the horror genre for weird gems and lost classics, since watching horror movies is one of the only socially acceptable ways to celebrate Halloween in middle age. But it’s important to look out for weird gems and possible future classics that are right under our noses, like the surprise hit Barbarian.

In typical horror fashion, the film opens on a rainy night, as Tess (Georgina Campbell) arrives at an Airbnb in Detroit. The house is occupied by Keith (Bill Skarsgård), who claims to have booked it under a different app. After failing to find alternative accommodations, Tess agrees to share the house with Keith, and once the initial awkwardness of the scenario passes, the two hit it off over a bottle of wine. But something isn’t right about the property—someone or something goes bump in the night—and one of Barbarian’s strengths is delaying the audience’s discovery of what that something is and whether or not Keith might be implicated.

At about the 45-minute mark, right when we finally find out what’s going on in the Airbnb, the setting abruptly moves to a Pacific Coast highway. AJ Gilbride (Justin Long) speeds along in a convertible to Donovan’s “Riki Tiki Tavi,” happily singing along with the lyrics before a phone call interrupts. His agent has extremely bad news: his co-star on a new pilot is accusing him of rape, the studio’s investigating, and regardless of the investigation’s outcome, they’ll almost certainly fire him from the show. To cover legal costs, AJ must liquidate the rental properties he owns, including an Airbnb in Detroit.

At this point, we know that the Airbnb has underground tunnels and something monstrous lurks those tunnels, but the film again takes its time, delaying AJ’s discovery of the tunnels for a half hour or so while he bitches to his property management company over the phone and goes drinking with his old hometown friends. In the film’s funniest joke, when AJ gets around to finding the tunnels, he’s less concerned with where they might go—or the purpose of the tiny room containing a stripped mattress and video camera—than whether or not he’s allowed to list them as square footage.

AJ ventures into the tunnel with a tape measure, oblivious to what’s waiting for him. When he finally meets the monster, the film suddenly flashes back to the 1980s, where we meet the house’s original owner Frank (horror regular Richard Brake) and see the neighborhood pre-sprawl. It quickly becomes clear that Frank built his basement bunker as an incestuous breeding ground, and the monster therein is but one of many subterranean offspring. (A later scene, in which a local homeless man confirms our suspicions via unnecessary expository dialogue, is one of the movie’s few lapses.)

Written and directed by Zach Cregger (The Whitest Kids U’Know), Barbarian has drawn several comparisons to Jordan Peele’s Get Out, partly because both were directed by sketch comedy vets and smuggle in sociopolitical commentary. Despite these superficial similarities, Barbarian is much more unwieldy and difficult to pin down—both in style and substance. On the former, Barbarian luxuriates in the edge of each frame. Cregger has a strong sense of where to place his camera, and he opts for long takes that build tension out of what we can or can’t see in their periphery. The film’s deliberately slow pace never feels like a burden, due to the abrupt narrative shifts that keep the story rolling. While not groundbreaking, these narrative techniques are unlike anything Peele has done thus far, reminiscent of Brian De Palma’s more uninhibited thrillers like Raising Cain and Femme Fatale (anyone with taste knows that’s a high compliment).

What most distinguishes Cregger from Peele is his approach to subtext. Get Out is an unqualified horror classic, but Peele’s subsequent movies seem suspiciously like the work of a writer prioritizing subtext over text, predetermining a few loosely-connected themes or ideas and reverse-engineering a screenplay around them. This results in films that, while often entertaining and brimming with ideas, are frequently nonsensical and don’t withstand scrutiny. By contrast, Barbarian is first and foremost a horror movie, and whatever political subtext there is—#MeToo, urban blight, homelessness, and the unregulated economy of Airbnb are all covered—arises organically from a tight script.

In the impoverished landscape of commercial cinema, Barbarian is an ideal place to take refuge.