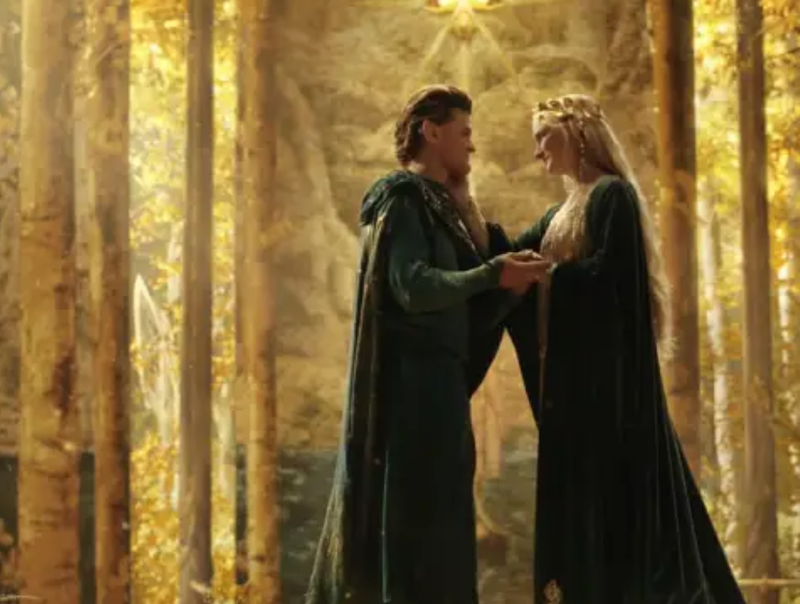 The Rings of Power’s first season, of which at this writing the first six episodes have streamed, is rife with cautionary tales for our politics and culture. The royal elf Galadriel appeared in the Second Age as a neoconservative archetype: the hardliner who raises an alarm about an external threat that softer types have convinced themselves doesn’t exist. We, the viewers, know she’s right: Sauron is out there somewhere, plotting conquest.

Galadriel’s familiar from The Lord of the Rings books and movies as a wise queen in the Third Age (albeit one whose resistance to the One Ring’s temptation has an uncertain moment). Yet in “Udûn,” episode six, as she interrogates Adar, who’s led the Orcs into the Southlands, her obsession takes on a malevolent aura. While Adar’s bound to a wooden pole, Galadriel ascertains he’s a Moriandur, an Elf twisted into one of the first Orcs by primal evildoer Morgoth. Galadriel’s incredulous at Adar’s claim he’d killed Sauron in a paternalistic defense of the Orcs. Then she says that she’ll exterminate the entire race.

Adar replies that in searching for Morgoth’s successor, she should’ve looked in the mirror. It’s a cutting point. The Orcs’ quest for a home in the Southlands has taken on a degree of moral complexity. Undiluted enmity toward them carries its own dangers. External threats to society need to be weighed—including the possibility that one might find an enemy’s enemy.

It’s a force of Númenorians that Galadriel’s led to the Southlands, having convinced Queen Regent Miriel and the castaway Southlander Halbrand that such an expedition was needed in uniting Elves and Men against a looming threat. The political divisions in Númenor are evident, though, with a nativist element showing hostility toward Elves and those who’d befriend them. This includes a fear among Númenorian workers that Elves will take their jobs, a concern that may be far-fetched, as it’s unclear why these non-aging esthetes would want such labor; still, that a populist movement would scapegoat outsiders based on faulty premises is plausible.

Anti-elitism is central to populism, and Númenorian jealousy of the Elves’ indefinitely-long lives, can be expected to be a factor in that island kingdom’s downfall. Based on Tolkien’s writings, one may expect that Sauron will appear in Númenor in the attractive form of Annatar, Lord of Gifts, and that this figure will have a pervasive corrupting influence. Prospects of a huge Temple of Morgoth and an expedition aimed at capturing Valinor, home of the immortal Valar, speak to the dangers of politicization of religion and a receptiveness to cults and conspiracy theories.

Other Second Age societies also have tendencies that pose risks to their long-term viability. The Dwarves’ economy is heavily dependent on extractive industry, a concentration conducive to denialism about the unintended consequences of such activity. The Harfoots practice a conformism that impedes their ability to develop a broader set of sociocultural practices as well as trade relationships with the outside world.

Complaints that The Rings of Power departs from Tolkien’s vision are overblown. Tolkien’s own interpretations of various topics varied over time; the Blue Wizards, for example, characters alluded to but never seen, were given shifting names and roles. The basic shape of Arda, the world in which Middle-earth is a continent—whether it was flat and became round; or if its flatness was a myth—was an evolving question. Tolkien’s treatment of his world was often that of a scholar inquiring at the edges of knowledge, rather than an omniscient narrator.

The Rings of Power brings laudable complexity to its character portrayals. Galadriel, despite her foibles, remains a sympathetic figure. She thanks Halbrand for pulling her back from killing Adar, much as she’d done when the Southlander verged on slaying their captive. A spark of romance emerges between these two; yet Halbrand’s ultimate identity has disturbing possibilities, including the Witch King of Angmar or even Sauron. Adar presents the intriguing prospect of a malign figure whose aims increasingly seem to hold merit, and who evidently is at odds with the main villain. What evils might exist that counteract other evils is a perplexing question, in Tolkien’s world and our own.