Pulpy melodrama and slight but nuanced realism in 99 Homes and Mississippi Grind. 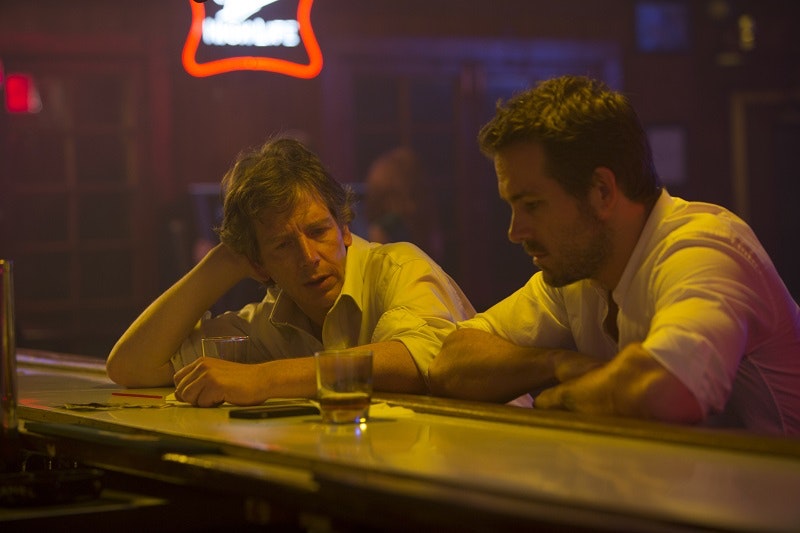 When I described 99 Homes to an acquaintance, he asked me if it was Latin—sadly, no. Orlando, Florida, USA—it’s a high melodrama, extremely over-the-top and pulpy, beginning with a bathroom covered in blood and an old man with a potbelly sitting on a toilet in his boxers and wife-beater, a gun on the floor, his brains splattered everywhere and everything visible but his blown-open head. Slow pan left over to Michael Shannon looking grim in the doorway, wearing a white linen suit and looking suspiciously like the lead puppet in Team America. An officer asks him for a statement; he tells him to fuck off, responding “How could any kind of statement make this absurd fucked-up tragic situation any better?” He storms out, puffing his e-cig and taking phone calls and barking orders back into it, evict this shithead, evict that one, sell, sell sell. He puts his shades back on, and gets back into the car. He has to evict Spider-Man next.

Not Tobey. Andrew Garfield. He lives with his mom (Laura Dern) and his son, and Shannon has come to kick him out of his house for good. But he’s a good ole boy, and after a bit of humiliation and degradation and infomercial tears, Shannon takes on Spider-Man and makes a lot of uncomfortable jokes about getting his dick sucked and getting a handjob from Spider-Man and stressing that working for his company means having to miss everything, even if his son has play recital, or he’s “got the best blowjob in Miami lined up.” Very strange. Florida seems like hell on Earth, and we’re trapped in it for nearly two hours in 99 Homes. With the other, more legit movie about the housing crisis coming out later this fall, 99 Homes is a welcome low-rent exploitation film, full of guns and grime and wallowing in the quicksand of Orlando. Spider-Man gets sent into a house full of raw sewage and shit where the absent tenants spray-painted the walls “KILL BANKERS.” You know that commercial where the mom is driving with her daughter and she’s on Instagram and then they get hit by a truck? This is that tone for two hours.

On the other hand, Mississippi Grind is the kind of understated atmospheric realism that I don’t see nearly enough of. Unfortunately, after 20 minutes, I was reminded why. This film has no momentum after a really promising beginning, with Ben Mendelsohn as a sad sack gambling addict who spots weirdo Cheshire Cat Ryan Reynolds as a good luck charm. It’s a bromance. They cross the Midwest, visiting lovers, ex-wives, and big pots. They need money for a big buy-in ostensibly, but the whole thing just peters out after Mendelsohn gets stabbed about half an hour in. He’s fine, and after meeting up with Reynolds again in the parking lot, he offers him a ride. Reynolds offers a hilarious and indelible line—“Nah, I’m good. I’m just gonna steal a bike.” Other than this, and its initial mood set-up, Mississippi Grind is more of a detriment to nuanced and atmospheric filmmaking than the bombastic and melodramatic 99 Homes.