Moved by The Martian 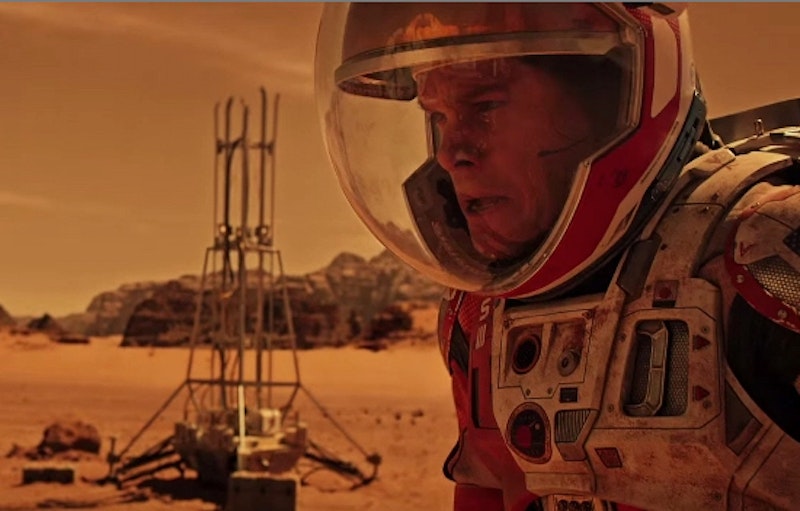 Sometimes it feels great to be proven wrong. I can’t remember the last time I was as pleasantly surprised by a big budget movie before I saw Ridley Scott’s The Martian earlier this week. The promotional material for this movie made it look awful, produced for mass appeal and bogged down by Matt Damon. He’s an actor who can’t help being himself whatever he’s in, whether he’s buying a zoo, assassinating terrorists, or being a retarded puppet. This movie’s been being pumped for months, and I saw the trailer half a dozen times—The Martian took on this anti-gravitational repellent force, and I wouldn’t have bothered, but my mom and I went on an afternoon just to see a movie, as we do.

The warning signs were flashing red—Damon gets stranded on Mars, and he actually says at one point in the trailer, “I’m gonna have to science the shit out of this.” It looked goofy, bad, boring, overly serious, bloated, and sterile. Over two hours of Damon fertilizing soil with his own shit in his little space tent, growing potatoes, complaining about all the bad disco that his captain left behind. After getting caught in a sandstorm as the crew is about to depart the red planet, Damon is blown away, and quickly presumed dead. The remaining crew is devastated, with four months left to go on their trip back to Earth. Miraculously, Damon survives, and remains curiously un-frazzled and level-headed even before he re-establishes connection with NASA on Earth. They wait a full two months before telling the remaining crew in transit that he’s alive and somewhat well, MacGyver-ing his way about staying alive and keeping what remaining rations he has, along with occasionally indulging in powdered Vicodin along with his potatoes and toast (who knew astronauts took painkillers with them? Makes sense, though).

Jeff Daniels plays the chief of NASA, who dismisses plans to try and swing the crew back to Mars to retrieve Damon, wisely arguing it’s better to get five astronauts home alive than risk the death of all six. But the crew effectively commits mutiny, and after a disheveled boy genius played by Donald Glover sciences the business out of a schematic, the crew extends their trip by nearly 600 days and endeavors to go and save their partner. Meanwhile, Damon has withered and deteriorated after over a year alone and low on rations, emaciated and covered in sores, with a disturbed man’s beard, looking uncannily like Leonardo DiCaprio.

Ridiculous physics ensue as the whole world watches, gathering in Times Square and cities across the world as the crew perilously attempts to save Damon, who launches himself into space without a roof on his pod, and propels himself with the air leaking out of his glove. He makes it, everyone wins, everyone cries, and after two hours of surprisingly compelling outer space survivalism, Damon’s back on Earth, with a new pair of glasses teaching a college course on his experience. We both clapped at the end. It was fun—his return to Earth was genuinely moving.