E. Elias Merhige’s Begotten (1989) shows life as it truly is, with all of its grotesqueness and horror. 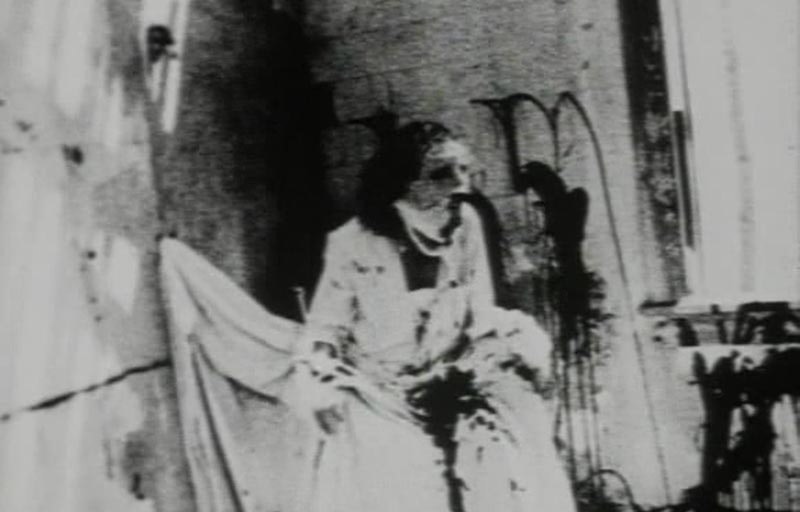 The best way to describe E. Elias Merhige’s 1989 film Begotten is to imagine a Hieronymus Bosch hellscape captured on film. The 72-minute black-and-white film received praise from both Susan Sontag and Marilyn Manson, the latter of whom got Merhige to direct two of his music videos. Begotten will disgust, intrigue, or bore the viewer, sometimes all three simultaneously. It’s exactly what Merhige wanted.

You with your memory are dead, frozen

Lost in a present that never stops passing

Here lives the incantation of matter

Life is flesh on bone convulsing above the ground.

The film then opens into what appears to be a close-up of a person’s eye opening, a brief glimpse of a sunrise, and then a shot of a rundown shack in the woods. Inside is a man covered in rags sitting on a bed shaking uncontrollably and bleeding out of his mouth. The man, who’s listed in the credits as God Killing Himself, cuts his chest open with a straight razor and pulls out his organs until he dies. Under the bed comes a woman, Mother Earth, who masturbates the dead God and artificially inseminates herself with his semen.

After God’s burial, Mother Earth gives birth to—and then promptly abandons—Son of Earth, Flesh on Bone, a naked man covered in dirt helplessly convulsing on the ground, just as the opening poem described. A tribe of hooded figures take the Son of Earth, eat his regurgitated organs, torture him, and leave him for dead. Mother Earth returns and drags the Son through the woods by an umbilical cord around his neck, but soon they encounter the hooded figures again, who rape Mother Earth and then kill them both. They stuff Mother and Son’s organs into the ground, and the film ends with old flowers dying and new ones blooming as Mother Earth drags her Son through the woods again.

At its worst, Begotten can be boring and arduous to get through. Unlike Midsommar, where the slow pace builds suspense, most of the scenes from Begotten could’ve had two minutes cut and it wouldn’t change a thing. The film’s use of high-contrast and grainy cinematography also makes Begotten hard to watch; it’s nearly impossible to know what’s happening in certain scenes, especially the gorier ones.

But at its best, Begotten exemplifies the artistic possibilities of film. Originally conceived as an experimental theater piece, the film has no dialogue, relying on visuals and an ambient soundtrack—by Evan Albam—to explore themes of death, rebirth, and the cyclical nature of time. “I've always believed in the continuity of consciousness,” Merhige said in a 2004 interview. “I don't think the body dying means it's over. It just means that there's a transformation taking place. So what we call physical death is not something that I think is some sorrowful loss.”

The film creates its own mythology using elements of Nietzsche, Christianity, and creation myths from different cultures. It’s a twisted retelling of the Bible where God creates the earth by spilling his guts out, the Holy Mother conceives by masturbating a dead god, and the Son’s brutal murder brings life to a barren wasteland. Time’s a vicious cycle in Begotten; nothing can be born without something else dying first. It’s pessimistic, but true. Animals kill each other to survive. Plants become mulch for other plants to grow. Life is a never-ending cycle of birth, death, and rebirth, with no sign of liberation in sight.

In The Gay Science, Nietzsche proposed a thought experiment: what if a demon said you had to live your life all over again with the same painful moments? The first response would probably be anguish, but what if you embraced it? What if you responded, "Okay, this is how it is"? This is the purpose of Begotten: to show life as it truly is, with all of its grotesqueness and horror, and ask the audience whether it can accept it.