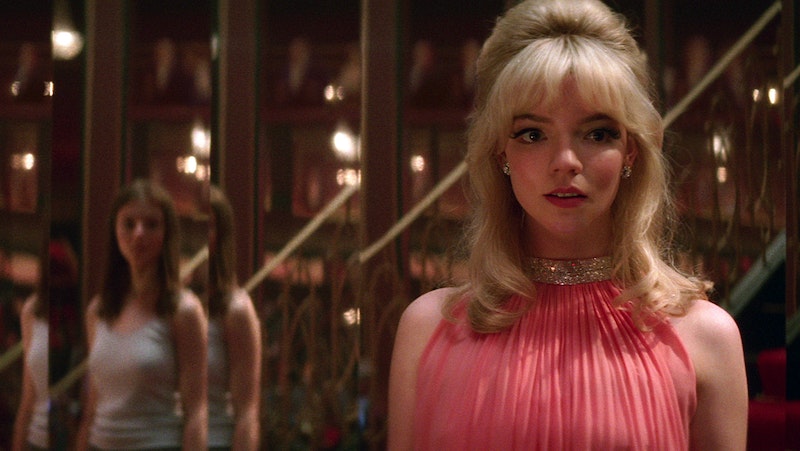 Edgar Wright’s Last Night in Soho does resemble many of the Italian giallo films referenced in all of the promotional materials: a disappointing and routine murder mystery with a few cool shots. But as Splice Today’s Ben Nash said, “For the life of me I can’t understand how or why this was slapped with an 18 certificate [in the U.K.]. Toothless, prudish and despite its best efforts quite misogynistic.” I wouldn’t go that far—especially considering many of the best giallo and Italian genre filmmakers of that period made exceptionally misogynistic work—but Last Night in Soho is close to toothless and definitely prudish for a film that, once again, was inspired by British crime and Italian horror films.

It’s not insignificant that neither of the leads—Thomasin McKenzie and Anya-Taylor Joy—are never seen nude. A requirement of these movies, along with the badly-dubbed foreign star (or badly-dubbed supporting cast), and the gloriously violent and insane kills. You don’t even have to dig deeper than Don’t Look Now, one of Wright’s favorites, to find both sensuous sex scenes and immediate, brutal violence. This is coming from the guy that made Baby Driver only four years ago, a wildly fun and fast action movie high on its own supply and all the better for it. Ditto for 2010’s Scott Pilgrim vs. the World, another sweet piece of hyper pop cinema. For a movie touted as a journey into the lurid halls and walls of European horror, Last Night in Soho is a snooze.

McKenzie plays Eloise Turner, an aspiring fashion designer going to study in London. She’s green and inexperienced and flower-fresh, and right after she finds a room in a house run by Diana Rigg (in her last role), she’s thrown into the snake-pit of mean girls, drugs, and sex. After Eloise manages to keep it together amongst peers doing cocaine (GASP!), but one night she somehow time travels back to the late-1960s. At the very beginning of the movie, we know Eloise has something supernatural—dead mothers appearing in mirrors—and in her time travel reality, she’s Sandie (Taylor-Joy), a glamorous model who turns out to be under the thumb of a pimp played by Matt Smith. Eloise tries to save Sandie from her gory death, but it turns out… Diana Rigg was Sandie! And she killed all the johns her pimp sent in…? I think.

A lot of the criticism of Last Night in Soho has to do with the incoherent plot, and while that’s not wrong, it’s also another hallmark of these genre films Wright was ostensibly inspired by. I’m taking that press release at face value, but I was also reminded of all the unbelievably dull British films of the 1960s with absolutely no visual imagination. Wright is the rare British director with any identifiable visual style, but here he picked the wrong time to go “mature” or measured. What makes the films of Umberto Lenzi, Lucio Fulci, Sergio Martino, and countless others so beautiful and compelling are their music, their women, their craft, and their kills. There isn’t much else: don’t expect great acting, don’t expect a plot that makes sense, just have fun. There’s still a misconception that directors of “sleaze” were technically deficient, and while the world has caught up with the artistry of Jess Franco and the aforementioned Italians, they’re far from household names, even for big film fans.

Last Night in Soho offers one cool recurring shot of a bloody knife with Taylor-Joy’s reflection going in and out of someone’s body. Even the cinematography feels listless and far from determined, a mystery with no pulse. Again, the excitement in these movies doesn’t come from the machinations of the plot but the scenes themselves. You can make a completely incoherent movie on a story level but still make a masterpiece if it’s brilliant scene by scene. The excitement of seeing Carroll Baker isn’t just base titillation: it’s the thrill and novelty of seeing Carroll Baker, a movie star we’ve known before, topless. McKenzie and Taylor-Joy don’t have to get naked for this movie to be exciting, but it has no thrills. No great kills, very little kaleidoscopic lighting, and not nearly enough of that cool mirror shit when they’re doubled on the stairs.

I like Wright’s films. I think he’s a very good director, who hits more often than misses. There’s absolutely no reason why he should be making films this dull, uninspired and prudish, when he’s capable of so much more.