In Kate, Ninjas Conquer Everything

Kate, like many genre products, is a multicultural stew of familiar ideas. 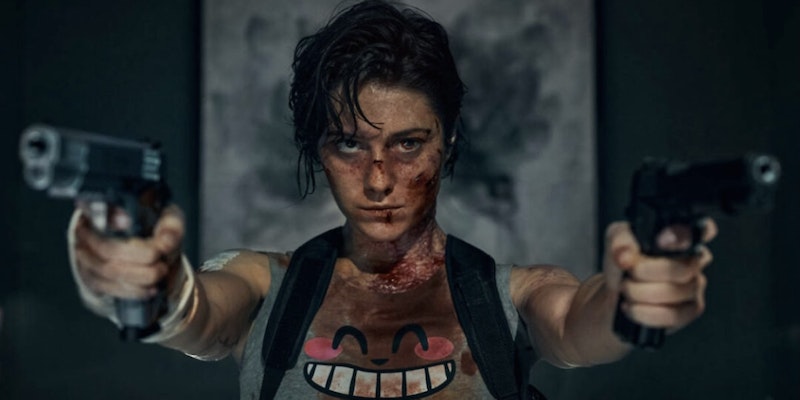 As a child in a not-very cosmopolitan city in Pennsylvania, my first introduction to ninjas—or anything related to Japanese culture—was the classic Chris Claremont/Frank Miller Wolverine mini-series from 1982. The narrative and visuals, both strongly influenced by manga and anime, featured the white Western X-Man slashing his way through phalanxes of ninjas and samurai in pursuit of his Japanese girlfriend. The 1980s Wolverine was (yet another) mighty whitey who travels east, learns from the non-westerners, and then becomes better than them at their own culture of honor and murderous combat. As a somber yakuza leader says in the new Netflix film Kate, “It’s [Westerner’s] way to take and take until there’s nothing left; to gorge on cultures they don’t understand and then evacuate their bowels on the rest of the world.”

This is a critique that could be directed at Kate itself. The movie follows in the Orientalist Wolverine tradition of white people beating the snot out of Japanese antagonists. At the same time, Kate suggests that after decades of pulp borrowings between Japan and America, which culture is gorging on the violent empowerment fantasies of the other is hard to untangle. When you tell someone else’s story, are you stealing it? Or is it stealing you?

Kate, like many genre products, is a multicultural stew of familiar ideas. The titular main character (Mary Elizabeth Winstead) was adopted as a child by Varrick (Woody Harrelson) who (having apparently seen La Femme Nikita) turned her into a peerless assassin. After an incident involving Ani (Miku Martineau), the daughter of a target who’s a member of the Japanese yakuza criminal gangs, Kate wants to retire (like Chow Yun-Fat in John Woo’s The Killer.) She has to make one more hit in Japan, though, and before she can do that she’s poisoned.With 24 hours to live, she has to find her murderer by slaughtering her way through the Japanese underworld, as in many a yakuza revenge film. And, as in Lone Wolf and Cub or Terminator 2 she has to fight all those bad guys while protecting a child—in this case, Ani.

Kate isn’t precisely a superhero, though her origin and preternatural fighting abilities are virtually indistinguishable from those of the recently released MCU film Black Widow. She’s not precisely a ninja either—though she’s very much like ninjas themselves. In theory, ninjas were a secret military force of assassins in the Sengoku Period [c. 1487-1603] who developed supremely difficult and unbeatable techniques of stealth killing. In fact, such a secret force almost certainly didn’t exist. The Japanese military practiced spycraft and assassination like most other militaries, but there was no cult-like black-clad secret to it. Ninjas are to actual Japanese history more or less what James Bond is to the British secret service; a complete fantasy.

Instead, ninjas as we know them today—black clad, invisible, unstoppable—are a story, a myth, or a genre, rather like spy fiction or like superheroes. Ninjas appeared in books and plays in the 1700s; over time artists and writers garbed them in black pajamas to indicate their ability to disappear.

In Japan, ninjas were mostly associated with spying, not assassination. When they slunk across borders they tended to turn into deadlier assassins, starting with the James Bond film You Only Live Twice in the 1960s, on through Hong Kong movies like the eye-popping Five Elements Ninjas in 1982, and up to the ninja society of the Hand, which was invented by Frank Miller in the 1980s and shows up in the recent Netflix Daredevil series.

Ninjas reached their height of Western popularity in the 1980s, when Japan’s economic rise led to both global resentment and envy. Ninjutsu martial arts schools training purportedly based on ninja techniques became popular in the US. I remember kids at my school excitedly debating the virtues of nunchucks and shuriken. Film representations of ninjas reflected Western anxieties about Japan; inscrutable, deadly, and ubiquitous.

Kate is ambivalent about its enthusiastically infiltrated and impure genre roots. The character herself is fluent in Japanese; as with many a mighty whitey before her, part of her cool and her mystique is the ease with which she can navigate in and blend into a foreign culture. And Ani, the moral center of the movie, has a Japanese mother and white father. Kate, in protecting her, is in part protecting and defending the film itself, with its mix of Japanese and white characters and tropes.

At the same time, though, the ultimate villains in the film are collaborating to extend white influence among the Japanese criminal gangs of the Yakuza. That’s presented as undermining Japanese honor and tradition embodied in the Japanese leader—but also embodied in Kate herself, who fights against impossible odds even as she faces death.

Kate makes a white woman the true icon of Japanese honor, even as it relies on the amazing talents of roomfuls of Asian stuntpeople. Part of what’s happening here is cultural appropriation. But part of what’s happening is simply the re-remixing of pulp genres and pulp that all went global decades ago. Kurosawa’s Seven Samurai, influenced by the Hollywood Westerns of American occupiers, became themselves the blueprint for Hollywood Westerns like The Magnificent Seven in the 1960s. All of this established the mixed East-West genre bricolage that eventually led to space cowboy Han Solo teaming up with space samurai Obi Wan Kenobi—who also looks like a space superhero.

The fact that superheroes, from space or the MCU, have conquered global cinema screens isn’t a surprise; it’s in thegenre’s spirit. Superheroes are empowerment fantasies. They’re stories about acquiring supreme physical and magical skills that allow heroes to conquer all foes. The whole point of Captain America and Iron Man and Dr. Strange is that they’re the most awesome forces for good in the universe. Everyone’s meant to cheer them on and/or want to be them.

By the same token, ninjas are supposed to be unbeatable and uncontainable; there’s no door or security which can protect against them. Like shadows, they slide into James Bond, into Wolverine, into China, into superheroes and fictions near and far. You can’t keep them out.

The ubiquity of mighty whitey stories is one way in which American culture can be racist and imperialist. Another way is by assuming that America’s the only culture with global influence, or the only one whose stories are overrunning the earth, via force or stealth. Kate leaves a wake of carnage behind her. But even she can’t escape the ninja.