Finch deserves to be treated as more than a pandemic castoff movie, a film that succeeds in fully transcending its premise. B+ 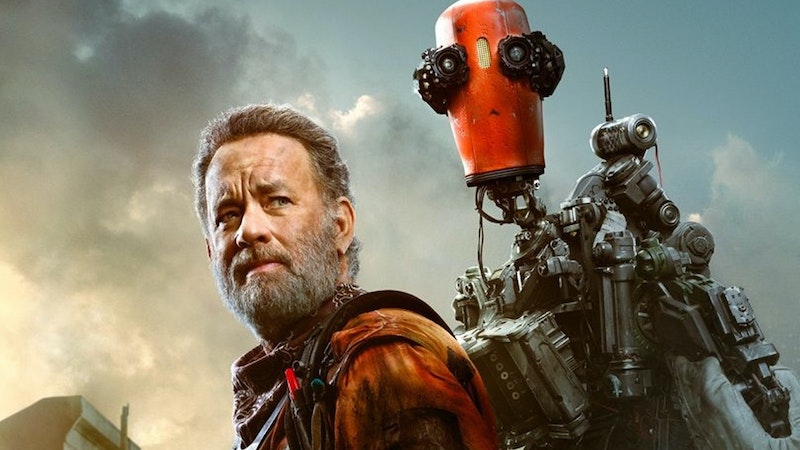 Finch has three characters: A man, a dog, and a robot. That setup, on its face, doesn't sound promising. But the man is Tom Hanks, the dog, Goodyear, is appealing, and the robot, Jeff, a fully-realized character transcends the Chappie-like limitations that are implied by the way he looks.

Finch pulls together parts from many other previous works, from various Asimov adaptations to I Am Legend to WALL-E to Cast Away to Mystery Science Theater 3000. And while it won’t earn a spot on the top of Hanks’ career resume,  Finch is a charming and occasionally funny film that manages to tell a post-apocalyptic tale without feeling like a downer.

Finch doesn’t contain a lot of action, and aliens or zombies don’t show up. It's dramatic, character-driven sci-fi, of a variety not often seen today. And while I wasn’t expecting to care about the relationships among man, dog, and robot, I did. Hanks gives a monologue about two-thirds of the way through, about his backstory and how he ended up with the dog, that’s legitimately powerful, and you believe it. Even better, the film leaves a couple of key mysteries in place, and gives them satisfying payoffs.

Hanks plays Finch Weinberg, an engineer and inventor who appears to be the only human survivor of an apocalyptic event. Dying, and with a trusty dog, Finch builds a sentient robot named Jeff, to care for the dog after he's gone. The plot of the movie mostly involves a road trip around what's left of the United States, and the man, robot and dog getting into a series of adventures. The robot’s voiced and motion-captured by actor Caleb Landry Jones, sounding a lot like the backwards-speaking Man From Another Place from Twin Peaks. And since Jones was in the Twin Peaks revival, that might not be a coincidence.

The film borrows a lot from Wall-E, including the characters finding incongruous ways to play old music. We hear most of Don McLean's "American Pie," first with Hanks singing a couple of verses to himself, before playing the song himself. This indicates that we'll still be stewing in boomer mythology, even after the apocalypse.

Finch was directed by Miguel Sapochnik, who used to direct Game of Thrones episodes and specialized in those with massive battles. It's his first film in more than a decade, since 2010's Repo Men. That was the movie starring Jude Law and Forrest Whitaker as guys who repossess the organs from people in medical debt. This film, though, is the furthest thing from Jon Snow fighting White Walkers—it’s very few characters and minimal CGI. It feels like one long Spielberg homage, from the John Williams-aping score to the relationships to the backstory involving dad issues.

Originally tilted BIOS and shot pre-pandemic, Finch was set for a theatrical release from Universal, but was delayed throughout the lockdown period and eventually sold to Apple TV+, which was also the fate of Hanks' 2020 World War II drama, Greyhound. Finch deserves to be treated as more than a pandemic castoff movie, a film that succeeds in fully transcending its premise.