The Nun's Story (1959) is a refreshing and sobering compaion to Audrey Hepburn's other 1950s classics. 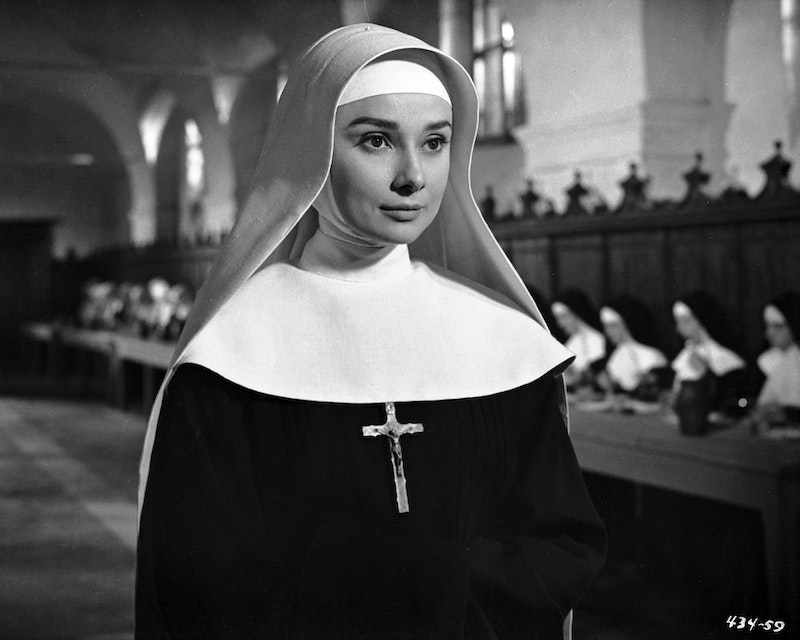 Fred Zinnemann’s 1959 film, The Nun’s Story, is an unusual part of Audrey Hepburn’s cinematic oeuvre. Known for her roles of an ingenue who becomes mature and worldly in films like Roman Holiday (1953), Sabrina (1954), and Funny Face (1957), Hepburn takes on a different acting responsibility in Zinnemann’s exploration of one nun’s life. In many ways, there’s a similar trajectory that follows in the story: a young Belgian woman feels called to a religious life, and joins the convent. Like many postulants and novices at the convent, she’s innocent and unaware of what awaits her, and as the story unfolds, she experiences a different kind of conversion that ends in abandonment of the cloistered life. She has gained wisdom and worldliness but the kind that’s less glamorous than in Hepburn’s previous films.

Based on an eponymous novel by Kathryn Hulme (who wrote the novel about the true story of a Belgian nun, Marie Louise Habets), Hepburn plays Gabrielle Van Der Mal, a novice who becomes a nun and takes the name Sister Luke. She’s an intelligent young woman, a daughter of an accomplished surgeon. Her wish is to work in the Congo as a nurse, yet the path she chooses is the one of religious life.

Before becoming Sister Luke, Gabrielle is accosted by the reality of the convent life. The Holy Rule is rigid, and Mother Superior appears to be exercising sadism rather than spiritual direction. Sister Luke doesn’t seem to have any issues in following the vows of poverty and chastity, but obedience proves difficult.

In the convent, she continuously breaks the rules. She talks during the Grand Silence, seeks friendship among other nuns, tends to patients in the hospital even when the bell for the Mass rings, and is unable to detach her thoughts from the previous life. She frequently writes in her journal of all the things she accuses herself of doing. None of these rules make any sense to her, and although the intention in spiritual discipline may not be harmful, the focus on the union with God as opposed to an encounter with human beings is the breaking point for Sister Luke.

But this didn’t occur overnight. It was an accumulation of events that were imposed on Sister Luke, which logically made no sense. In order to cure Sister Luke of her supposed pride, Mother Superior instructs her to practice humility. This comes at a horrible price: Sister Luke’s forced to fail her medical exams. Instead of being sent to the Congo, which was one of her desires, she’s sent to a psychiatric hospital to work as an assistant. She’s not supposed to interact with the mentally insane patients, but her humanity doesn’t allow her to distance herself from the people. This too comes at a price when she’s brutally attacked by one of the schizophrenic patients, who calls herself Archangel Gabriel (played brilliantly by Colleen Dewhurst). This leads her toward even more guilt and questioning whether she can truly be a “good nun,” but what that is remains one of the mysteries for Sister Luke.

There’s always something new to learn in every situation that human beings find themselves in, and Sister Luke tries to live by this principle. But she (and the audience) really can’t help but think that the entire enterprise is about the denial of Sister Luke’s gifts, her incredible medical expertise. This expertise becomes even more obvious when she finally gets sent to the Congo, but instead of working with the Congolese, she’s assigned to the hospital where the infirm are Europeans. It’s here that she meets Dr. Fortunati, a forceful, intense, yet good doctor, played by Peter Finch.

Fortunati sees the immense talent that Sister Luke has, and it’s he—the unbeliever—that ends up providing the best spiritual advice that she ever received. Throughout her time in the Congo, Fortunati notices that something’s bothering her. In an effort to justify her coldness to him, Sister Luke says, “A nun must be disciplined.” Discipline is one thing, says Fortunati, but tension quite another. He senses a great “interior exhaustion.” For all their determined religious rules, spiritual wisdom, and access to the works of great Catholic spiritual writers, the nuns are unable to fully understand Gabrielle and her own spiritual journey. It’s Fortunati who guides her through the spiritual progress of her soul, and it’s through him that she realizes who she is and who she might become if she continues on an inauthentic trajectory.

Hepburn still exhibits the unique essence that brought to the silver screen. Her beauty’s almost always visible through her interiority, something that comes with great ease for her. Much like the character of Sister Luke, Hepburn has always strived to be her best, and often, she was hard on herself for what she may have perceived as failure. Anxiety was constant, and it’s not difficult to see why Hepburn would gravitate toward such a role, which enabled her to explore emotions and regions of being that are often suppressed through her funny and “light” roles.

Finch extends his acting range. We witness an intense actor and there are traces of what’s seen later in his career in films like Sunday Bloody Sunday (1971) and Network (1976). Finch’s Fortunati is a man who can’t help but become attached to the joyous spirit of Gabrielle, and Gabrielle can’t help but realize that the meaning of life is an encounter with other people, and not in a cloistered existence.

Despite all this, Zinnemann is respectful of the Catholic tradition. This isn’t a film that makes a blanket statement against religion or those who choose religious life. There are nuns in the film who disagree with Mother Superior’s inhuman ways. Rather, Zinnemann renders characters in a unique light. Each person, including the “villainous” nun, has a sense of complexity. In some ways, this isn’t only a story of Sister Luke/Gabrielle. This is a story of how her actions and her choices have influenced the spiritual journeys of others. Zinnemann, as well as Hepburn and Finch, are fully aware of these intentions, and have created a nuanced film that paradoxically eschews preaching. Instead, we see an unfolding of individuals, who are seeking to answer a call of an authentic life.