Do It For Iceman

Top Gun: Maverick is the rare decades-late sequel that matches the original. 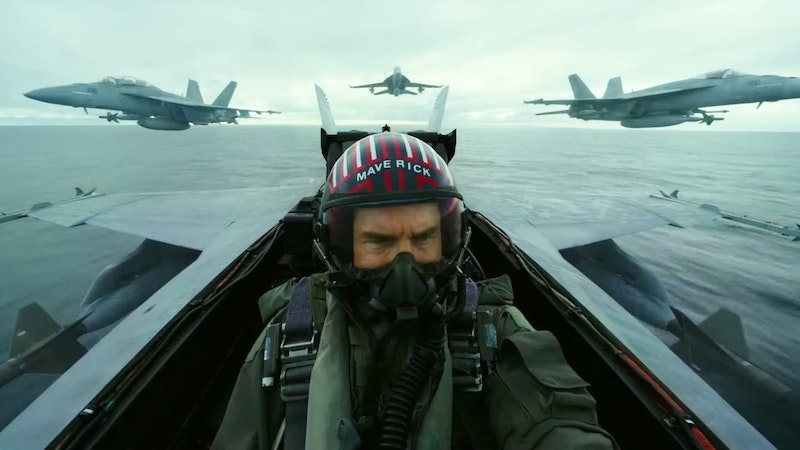 Top Gun: Maverick joins Ryan Coogler's Creed, George Miller's Mad Max: Fury Road, and Rian Johnson's Star Wars: The Last Jedi as the best sequel/reboots arriving decades after the original. Like those films, it's one that combines the right amount of reverence for the source material, homage, and fan service, with modernization, new ideas, and improvement on the original's weaknesses.

The sequel’s arriving 36 years after the first film, and also nearly four years after it began production; the release date was delayed multiple times thanks to Covid and the insistence that it debut theatrically. Directed by Joseph Kosinski and written by the team of Ehren Kruger, Eric Warren Singer, and Christopher McQuarrie, Top Gun: Maverick is the best action movie released by a major studio since Mad Max: Fury Road.

Kosinski was previously best-known for another decades-later sequel, 2010's underrated Tron: Legacy, and he nails the action sequences and pacing, and filling the film with gorgeous shots. Top Gun: Maverick is set more than three decades after the events of the original Top Gun, and Pete "Maverick" Mitchell (Tom Cruise) is still a Naval pilot, having avoided promotions and retirement, and still pissing off the Navy brass. Brought in by old rival-turned-Admiral Iceman (Val Kilmer), Maverick is given a new assignment: Training a group of young ace pilots on an historically difficult mission. It entails burrowing deep between two mountains to take out an enriched uranium site, and then climbing back up the mountain, without alerting nearby planes or anti-aircraft missiles.

One of them is Rooster (Miles Teller), the son of Maverick's best friend Goose, who died in the first film. There's tension between them, with Maverick holding on to guilt over the death and determined for Goose's son to not meet the same fate. The young pilots somewhat resemble the cocky pilots of the original Top Gun, with one (Glen Powell) an obvious Iceman stand-in, although the group is much more racially diverse and one (Monica Barbaro) is a woman. Besides Maverick, the only major character to return from the first film is Iceman, played by Kilmer, who has mostly lost his speaking voice to throat cancer, something that's been written into his character as well. His appearance is poignant and satisfying. New faces include Jon Hamm and Charles Parnell as Maverick-skeptical military brass, Jennifer Connolly as Maverick's new love interest, and Ed Harris in a brief turn as an admiral.

Tom Cruise remains one of the last true movie stars, and that he’s now nearly 60 is never a distraction or a problem, even in the obligatory shirtless beach sports scene. Teller is outstanding as Rooster, sporting a mustache and similar clothes to Anthony Edwards in the original film, while Powell—who I've been waiting to break through since he starred in Everybody Wants Some! in 2016—finally getting his shot as the cockiest of the cocky pilots.

The film's biggest improvement on the original Top Gun is the way it depicts the aerial dogfights. Those in the first movie were exciting, and had emotional stakes in terms of whether Maverick would survive (yes) and whether Goose would (no.) But they didn't really matter. The 1986 film gave us virtually no information about who the enemy was, or even the nature of the conflict. Top Gun: Maverick partially corrects this. Once again, we have no idea where the mission is—it appears to be some strange hybrid of China, Iran, and Afghanistan, where there are mountains and nascent nuclear capability, but also fighter jets that are more advanced than those of the U.S.

But more importantly, the exact plan for the mission is explained and depicted through difficult training runs in which the stakes, and what could go wrong, are definitively established. And we get a good idea of the spatial continuity of the final location. Not only did the first Top Gun skip this, but so does almost every major blockbuster, including just about all of the Marvel movies. The film’s music is great, interspersing Harold Faltermeyer's synth-oriented, very-1980s original score with more modern music from Hans Zimmer and Lorne Balfe. There's an original song from Lady Gaga that fits better than you'd think, while we also hear some of the famous pop songs from the '86 film.

There's not much here to anger Team Anti-Woke, aside from the notable racial diversity of the fighter team. I was sure that the film would pull the usual move of making a minor supporting character openly gay, therefore setting off an outcry that "they're making Top Gun gay," from those unfamiliar with three decades of certain discourse, but that didn't happen.

So many sequels and reboots are ill-advised. But Top Gun: Maverick is the rare film of its kind that makes nearly every right choice.