Lonnie Frazier's Box of Rain tells the story of how The Grateful Dead and their Deadheads saved her life after her sexual assault at 17. 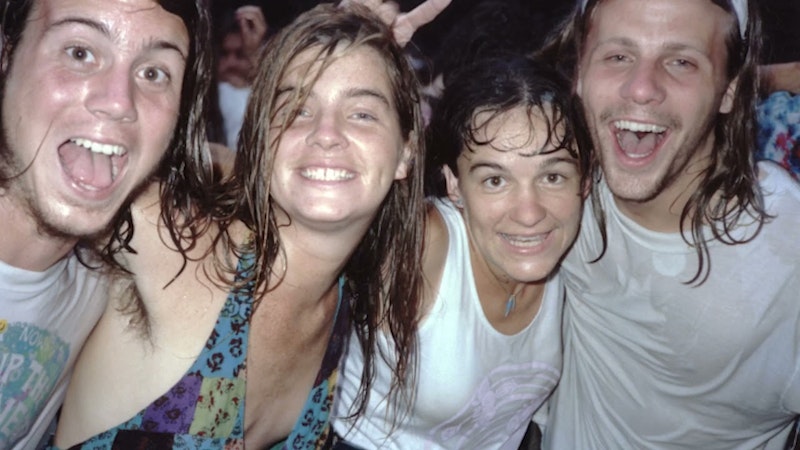 With Box of Rain, a new documentary now available on VOD channels, filmmaker Lonnie Frazier tells a personal story about how she suffered a horrific sexual assault when she was 17, and that her life was essentially saved when she joined up with the fandom of the Grateful Dead.

That entailed a road trip in 1985 in which Frazier and two friends drove from Maryland to Colorado to see her first Dead show. Box of Rain explores that story, and it's compelling and frequently heartbreaking. The ending features her emotional return to Red Rocks, where that first concert took place.

At the same time, the film looks at the more overarching subject of Grateful Dead fan culture in a way that's not new. Among the talking heads is Brian O’Donnell, a guy who in the early-1990s directed Deadheads, an entirely different documentary about the Grateful Dead fandom—and that’s far from the only one.

Box of Rain has another hole at its center: The filmmakers weren’t able to license any of the Grateful Dead's music or concert footage. So you might have the group's songs in your head while watching it, especially "Box of Rain," but you won't hear it in the film, although it does have a catchy, original theme song.

The Grateful Dead essentially came to an end in August of 1995, when Jerry Garcia passed away. I've always enjoyed the band's music, but I never really got the Deadhead experience, mostly because I was too young. I was in high school when Garcia died, I'm in my mid-40s now, and I've always thought of Deadheads as people a generation older than me.

The surviving members of the Dead— some in their late-70s— have continued to tour in various incarnations, under names like "The Dead" and "Dead and Company," and I gather that a lot of the old guard of fans are showing up to see them. But it's not the same. Dropping out of college to follow the Dead, isn't something anyone is doing today.

After Garcia died, Norm MacDonald joked on Saturday Night Live that now that the band was done, "Deadheads" would be known by a different name: "Homeless people." While the documentary includes some fans telling their stories of learning about Jerry's death, it has less to say about what Deadheads did with their lives after the band's run came to a sudden end that August. Did they become yuppies? Follow Phish instead? I'd be interested in those types of stories, especially with the reflection of more than a quarter-century, more than just an overall look at the Deadheads.

Meanwhile, the picture Box of Rain paints of Deadhead culture as one of peace, love, and progressiveness. Deadheads were ahead of their time when it came to accepting the marginalized and also moved to protect women who were at risk of sexual assault.

Few people interviewed have a negative word to say about the Grateful Dead, their fans, their music, or any other aspect of their culture as a band. They even defend the fandom against various knocks, starting with the widespread assumptions that everyone at the shows was on drugs (others have more positive memories of drug use at concerts.) That very few non-white faces show up either in the archival footage or among the interviewees is not something that's remarked upon.

We don't see much gatekeeping, except for the inevitable arguments that followed the arrival of "Touch of Grey," the group's only hit single, which brought a lot of new and unwelcome faces into the Dead fandom.

If a look at the Dead is what you want, I recommend Long Strange Trip, Amir Bar-Lev's four-hour Dead documentary from 2017 that's streaming on Amazon Prime, and has plenty of discussion of the fandom. Martin Scorsese, meanwhile, has announced plans for a Grateful Dead biopic, with Jonah Hill as Garcia.