On the Count of Three, Jerrod Carmichael’s directorial debut, is a rare “suicide pact comedy.” 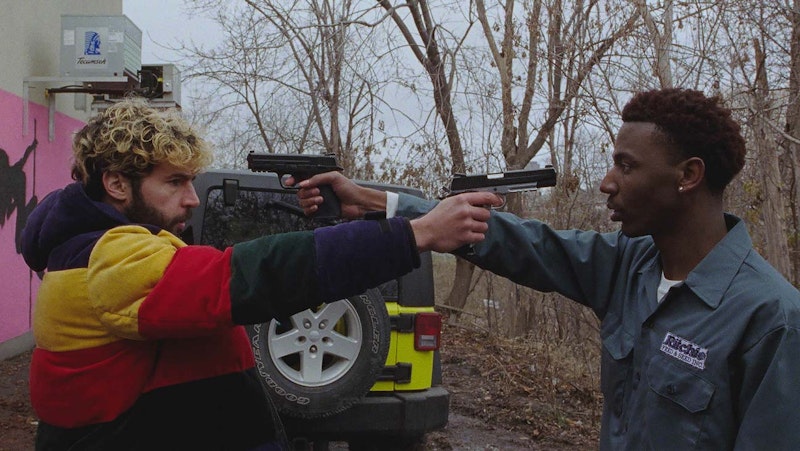 It wasn’t a good weekend to release a dark comedy about a suicide pact between two old friends, but On the Count of Three is as much as a victim of bad timing as August 2014’s Let’s Be Cops or September 2005’s planned reunion tour for Katrina and the Waves. Jerrod Carmichael’s first feature film isn’t about white supremacists or other crazy people who shoot up grocery stores and high schools. It starts off like Louis Malle’s adaptation of Le Fou Follet (and Joachim Trier’s superior 2011 version, Oslo, August 31), with two men who’ve long since reached the end of their ropes. Kevin (Christopher Abbott) is in a psych ward after trying to commit suicide three days prior, and much like Anders in Oslo, Kevin vacillates between zen deference, black hole flashbacks, and explosions of hostility. Just as Anders flips out and gives up in the middle of a job interview, Kevin can’t help but call the nurse a “bitch.” Endlessly apologetic, he’s still pathetic, and she says nothing.

Carmichael’s Val is a bit different: it only takes another meeting with his asshole racist boss to send him to the bathroom belt in hand. He unties the tight one when his annoying coworker walks in, and visits Kevin in the psych ward. Something’s snapped: he tells Kevin everything is meaningless, nothing will ever change, and then he lights a cigarette. Another nurse comes in, chides him, opens a window, and leaves. They escape through the window. In the car, Val tells Kevin he wants to commit suicide together. From the outset, Kevin is flipped out by Val’s sociopathy, even before he says, “The other day I got a call that my best friend tried to kill himself, and I didn’t even feel sad.” This is one of the better laughs in the movie, particularly Abbott’s reaction.

But Val remains elusive throughout On the Count of Three: as Kevin says at one point, “This shit has been on my mind my whole life. I’ve tried everything: ECT, CBT, every medication you can think of. I think at this point I’ve earned the right to say that nothing will ever change.” Kevin doesn’t understand why Val snapped, and neither does the audience. What’s going on with this guy? Ari Katcher and Ryan Welch’s script starts off strong but veers into clumsy and underdeveloped political material towards the end—and why? What’s the point of having Kevin call Val the n-word as they’re chased by the cops in their final blowout, and then apologize for it to an indifferent Val? The script is overly expository from the beginning, but by the end, it borders on tonal incoherence, with bad jokes and bum notes everywhere.

On the Count of Three is never dull or boring, and it’s often very sad, particularly whenever the molesting pediatrician played by Henry Winkler is involved. For the first time in years, Abbott has a lead role where he can go dark and fucked up—he’s a scary guy, and his brief late series reprise on Girls as a hopeless heroin addict was one of the show’s most haunting stretches. Kevin may as well be a follow-up: “fucked up” from day one, molested and assaulted at school by jocks who’d go on to fight in the Middle East. On their last day, one of those jocks runs into Kevin. The guy has a wife and kids. He seems like a benign lunkhead at first, but then the extent of his past abuse escalates quickly: his wife asks, “Didn’t you hit him with your car?” Kevin corrects her: “Truck.” The guy laughs and laughs. Kevin says, “I was in physical therapy for a year.” Then the guy makes fun of Kevin’s mangled walk.

You get why Kevin wants to die, and Abbott has so much anger and rage cooked into his face, he makes an otherwise cliched character more interesting. The movie opens with them pointing guns at their heads, and luckily after flashing back, we reach that moment within 10 minutes. Clever plotting ends there, with visits to abusive dads played by J. B. Smoove peppered with lines like, “I want that $2300 you stole from me,” or when Val tries to talk Kevin down from murdering his old doctor: “Come on, man. What he did was messed up, but that was years ago.” Carmichael’s direction is superb, and a high-concept comedy like this doesn’t have to be plausible, but once the seams start showing, you start wondering why the cops haven’t just shot these guys yet, or why they’re allowing them to have their moment before Kevin blows his brains out and Val surrenders, all to a slow dolly out from a prison daycare where he receives a visit from his young daughter and girlfriend (Tiffany Haddish).

Despite tilting at richer material—suicide, abuse in America, gun violence, systemic racism—On the Count of Three is made up of movie people, movie tropes and movie cliches.