Every Shade of Emmanuelle

Just a few of the many, many sequels to the 1974 erotica classic Emmanuelle. 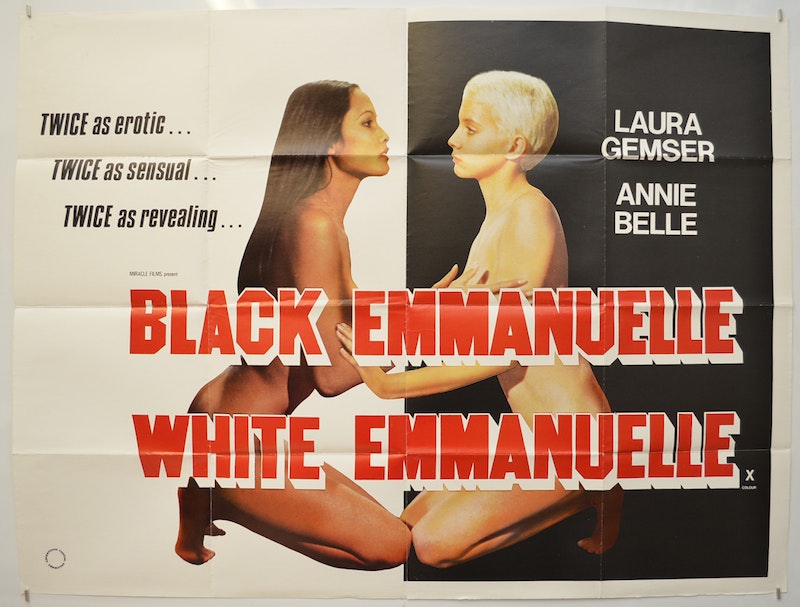 In the wake of the film’s success a mob of copy-cats wasted no time in ripping off Emmanuelle’s hedonistic philosophy and globetrotting premise (the existentialist adventures of rich sex tourists). Copyright hassles were side-stepped when these people spelled the main character’s name with one “m” instead of two. The Emanuelle series formed a strange chart of cinematic sexual evolution. With each new installment, over the course of four decades, it gradually mutated in harmony with the tastes and pathos of post-modern society.

Emmanuelle In Egypt aka Black Emanuelle, White Emanuelle (1976): Key elements of the Emanuelle aesthetic were impressionistic cinematography and lush locations. Soap opera histrionics were also prominent. Emanuelle regulars Laura Gemser (as the title character) and Gabriele Tinti (Gemser’s husband) displayed impressive range even while frequently playing underdeveloped characters. All of this present in Emmanuelle In Egypt, but it’s no ordinary sex film.

The movie evolves hypnotically, starting out as a tense exploration of cruelty and emotional detachment and ending as a trippy mood piece. Unlike many later Emanuelle films, this one doesn’t break the mold because of how awkward or obnoxious it is. It annihilates sex film cliches while staying true to the series’ overarching themes of sexual freedom. Emanuelle In Egypt is a heartfelt lust story for acid heads and the most original film of the series.

Young newcomer David Koresh reinforces Divine Emanuelle’s problematic nature. The future cult leader supposedly has a bit part here as a “Henchman.” During the early-1980s Koresh was a twentysomething living in L.A. trying to break into the music industry. He’d yet to attain the infamy that’d lead him to a fiery death as the catalyst of the Branch Davidians massacre. Just as Koresh’s music career was kicking off, Christian Anders was in the process of relocating to Los Angeles. So far no one has explained exactly how the man who’d become Waco’s mad messiah ended up in a German adult film.

More than just a disturbing curio, Divine Emanuelle is a cartoon meditation on the fantasies associated with promiscuity, paganism, blasphemy, and mental illness. The Divine One believes she’s omnipotent; her megalomania stems from schizophrenic contradictions and the emotional void created by her spineless worshippers. Eventually her carnal reign is crushed by the forces of “true love.” Despite that hackneyed ending, raw irreverence outshines all else in Divine Emmauelle.

Kung Fu Emanuelle aka Ninja In The Claws Of The CIA (1981): Martial arts mayhem and ruinous continuity are the prime elements of Kung Fu Emanuelle. The streamlined production values of early Emanuelle films aren’t found. This is a martial arts programmer first and foremost; soft core scenes are just garnish. Nonetheless, high points emerge as various femme fatales weaponize their seductive powers to battle director/lead actor John Liu’s main character, a kickass Vietnam vet attempting to escape C.I.A. imprisonment after the organization forces him to train their new recruits in the art of “zen kwon do.”

All that ties this to the Emanuelle series are Christian Anders and actress Raquel Evans (who’d previously starred in Emanuelle y Carol). Both performers have supporting roles in this entertaining oddity, a delirious shot of sexual power dynamics, cloak-and-dagger intrigue, and radical anti-American sentiment.