Censor is a blast, lurid and unburdened by any forced “topical” material. 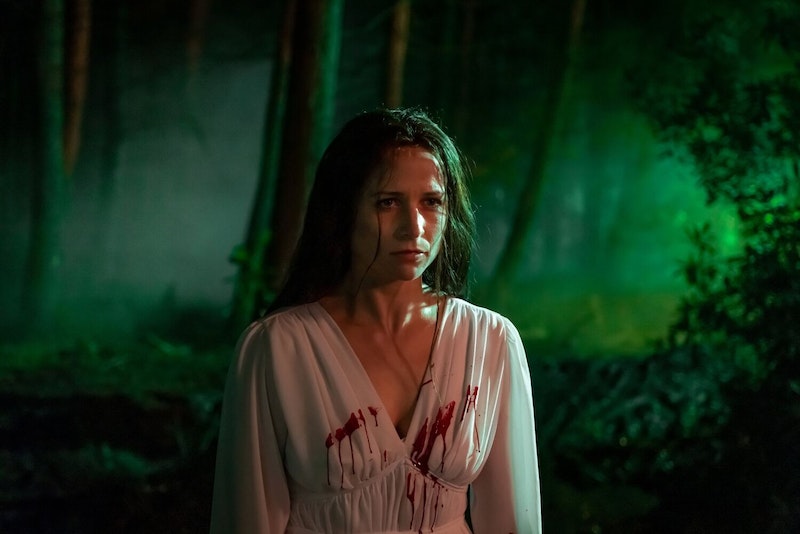 Here we go! Finally, a new movie that’s fun and looks great. I don’t care that Censor, co-written and directed by Prano Bailey-Bond, doesn’t hold up to much narrative scrutiny, especially as it goes on, but this movie is 84 minutes long. There are even repeated titles, a pet peeve of mine, but no matter, because seeing Censor in a theater ruled. The first time I went back to a theater in 2021 was a couple of weeks ago for Christian Petzold’s Undine, not a bad film, but interesting in any way. The next night I saw the original 1962 Cape Fear with some friends—much better, and bigger, and louder, in the same theater where I sat for the only theater respite of coronavirus summer 2020, with Christopher Nolan’s maximalist cuckoo clock Tenet. I wrote about what a good time I had, despite what a mess the movie was; Tenet was exactly what I wanted to see in an auditorium that summer: shiny, new, and stupid.

I don’t mean to damn Censor with faint praise, but this is the kind of moviemaking I want to see more of in theaters. Bailey-Bond isn’t trying to subvert the horror genre, or imbue it with any self-seriousness—this is a horror film, a proper “video nasty” that the main character screens daily at her job on the British Film Certification Board. Niamh Algar plays Enid, a dowdy and anxious woman who watches extremely violent movies all day in a smoky screening room with her jaded colleagues. It’s not just the men who leer at Enid and dismiss her notes and concerns: everyone is checked out. No one in this office, admittedly small, really cares about “protecting people,” as Enid says she does.

In fact, she appears to have a stronger stomach than her co-workers—before a new “video nasty” triggers both memories and delusions about her long missing and presumed dead sister (in an earlier scene, Enid’s poor put-upon parents give her a new death certificate for her missing sister, trembling as they await Enid’s furious response). Enid never stopped insisting that her sister was still out there. Her parents are clearly worn down and traumatized themselves, and every time we see them—only a few scenes—they’re shaking, realizing they’re losing their other daughter now, too. Enid becomes obsessed with a director named Frederic North, and after screening his latest film Don’t Go in the Church (she has a great joke that cracked me up in the empty theater: “Don’t Go in the Church—pretty soon there won’t be any places left to go”).

There she thinks she sees her sister, fully grown, “matching the police composite” as she tells her shattered parents, and she goes out to the leering producer’s house, where he lives alone, and one thing leads to another, and he ends up with one of his awards speared from the nape of his neck through his open mouth. An accident, of course, but this is where Enid’s delusions take over the film completely, and she probably murders another person on a film set. But something much more interesting happens in the lead up to this, to establish that she has entered a “video nasty” herself: the aspect ratio changes.

Very, very slowly, the aspect ratio changes. Censor is presented in 2:35, but begins in 4:3 to mimic a videotape. As Enid walks deeper and deeper into the forest, the edges of the frame move in imperceptibly. By the time you notice it, she’s talking to a werewolf actor. I couldn’t help looking at the edges of the frame for any movement, but this is something that happens between shots over the course of at least 10 minutes. By the time it reaches a 4:3 frame, Enid kills the werewolf actor, who’s an actor, and, according to the screaming woman beneath him, “a friend.” As soon as the guy gets axed, we shoot back out to 2:35.

It’s a neat trick in a small movie that most people will see at home, as it gets a perfunctory theatrical release and goes out into the poisonous stream of subscription services on the Internet. Censor’s muted lurid lighting (this isn’t Johnny Guitar, but it’s much more colorful than most movies made in the U.K.) is a big part of what makes this movie feel so fun and free of any topical or sociopolitical weight or commentary. There’s the history of “video nasties” in the U.K., but that’s the setup. This is a girl boss movie, this isn’t imposing like Midsommar, and best of all, it’s not bad, like so many other recent films with advertising that rides on badass female leads. I had so much more fun with Censor than the leaden and misguided I Care a Lot, and it’s worlds away from the braindead and offensive Promising Young Woman.