The Checklists of Hong Sang-soo

Three “new” films by the prolific South Korean director, including a good mistaken identity riff, Yourself and Yours. 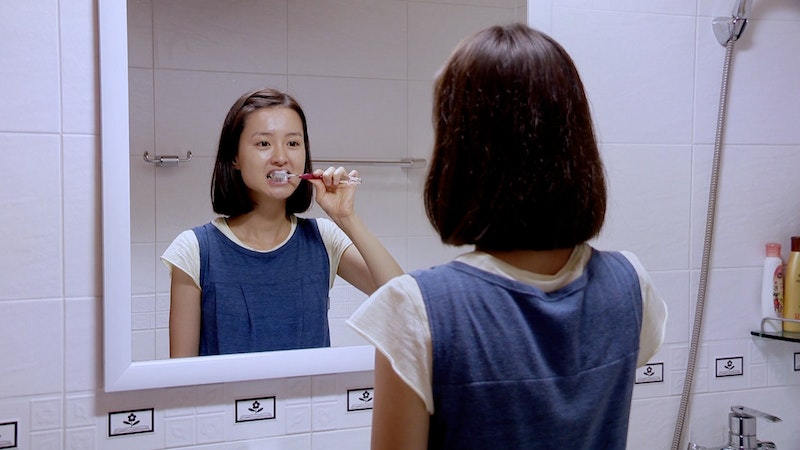 Hong Sang-soo is one of the only filmmakers I can imagine thriving in quarantine. Not just writing, but actually producing films. If he and Kim Min-hee are still a couple, possibly quarantined together, who knows how many movies he’s produced since his “latest” one premiered in Berlin? That one’s called The Woman Who Ran, but who knows when it’ll reach us in this “new landscape” of the pandemic—never mind the widespread civil unrest in the United States right now. Hong Sang-soo makes movies for the world, even if they’re usually about the same things, starring the same people.

Yourself and Yours, dated 2015 and released in 2016 in South Korea, has appeared in ad hoc “virtual cinemas” (watch it via this link to support The Senator Theatre) via Cinema Guild. Kim Min-hee is conspicuously absent in a pretty funny mistaken identity riff, where Lee Yoo-young plays a woman named Min-jeong who vanishes one day. Yet, a woman who looks exactly like her appears, and all the men in her life are desperately confused. “You are Min-jeong.” “I don’t know anyone by that name.”

Confusion and silent, awkward comedy follow. Familiar territory, but Yourself and Yours is distinct from the Kim Min-hee films, and decidedly less obscure. You could take your grandma to Yourself and Yours, if any theaters were open. If Hotel by the River is Hong’s most accessible drama, Yourself and Yours is his most accessible comedy. Lee has a sillier sensibility than Kim, who looks and acts like a muse in all of Hong’s films from the past five years. This is no breakthrough, no “correction,” no evolution, just a tighter and more familiar story structure.

Hong’s American counterpart is Larry David, another master of his craft content to coast on his talent without challenging himself. I admire anyone as prolific as Hong, and thankfully the films are good, but Nick Pinkerton, in a 2018 essay for Reverse Shot, made a convincing argument about Hong’s lack of ambition: “And so another new year will bring, presumably, another Hong movie or two (or three), loose, sketch-like films, full of drink and recrimination and merciful amnesia sent out to make the well-trod fest rounds again, and play to the base. Employing movie stars is the full extent of Hong’s petition to a wider, popular audience—he has little of the sense of missionary outreach shared by Fassbinder or Rossellini in the 1970s, fired by the belief that a formally challenging cinema still had something vital to say to a popular audience.”

(More depressingly, he continues: “Hong’s is instead a private, self-contained idea of filmmaking, comfortable in its marginal niche and well-prepared for the final disappearance of that popular audience, made for little money with a few trusted friends and catering to a viewership of a few more.”)

For the few, it’s reassuring to think he could be massively productive in quarantine because almost all of Hong’s films are produced with a skeleton crew and very few locations or actors. They talk, smoke cigarettes, drink soju, and fuck—or talk about fucking. Really, things get more romantic than that, and Hong’s eyes wander from the bedroom to the heart to the spirit of art and the inherent awkwardness of human communication and relationships. Grass, his latest on home video, is another dream film, similar to Oki’s Movie or the stellar 29-minute short List included on the disc for Grass.

In List, from 2011, Jung Yumi stars as a grad student on vacation with her elderly mother. After a brief, discouraging chat about the direction of her life, the girl starts writing a to-do list. As expected, they run into “a famous director,” and the mother goads the girl on as the director flirts with genuine confidence (at odds with Hong’s typical avatars, emblems of antisocial dysfunction) and the girl blushes. Jung stands out here, and she’s more expressive and compelling than Kim Minhee, already by Grass taken over by a kind of cool detachment. List has the giddy crush high innocence and naïveté of Hong’s best, like Woman on the Beach and Right Now, Wrong Then.

The music in Grass is not as noticeable or evocative as The Day After, where he repeatedly used a piece of electronic music he made that sounds like Mahler being played through a phone. In Grass, Kim daydreams and eavesdrops while writing (and trying to write) next to a group of surprisingly interesting people. Grass is a deeper, weirder film, not the hook of Hotel by the River. Like so many of Hong’s movies, it’s beguiling and not all that at first, but with time some grow.

But List is extraordinary, an immediate favorite, mostly because of Jung Yumi’s performance and the familiar frame is used elegantly—a film “that was all a dream” that isn’t cheapened at all by its final minutes.