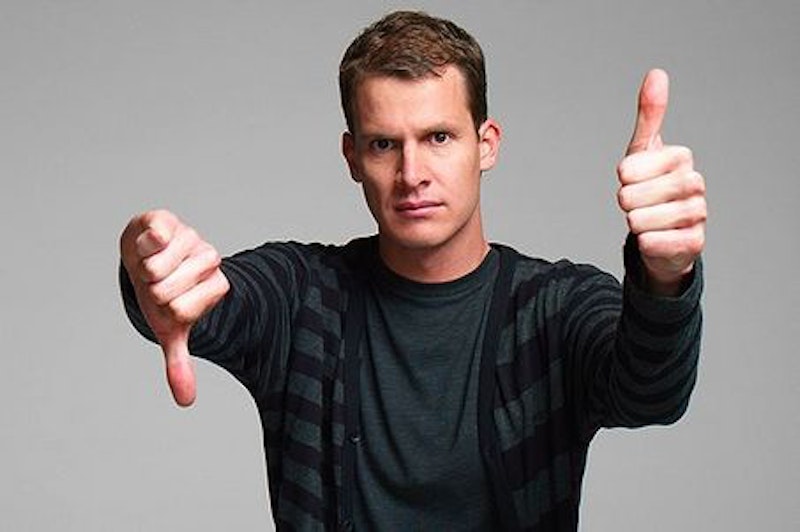 I’m not sure I’ll ever get used to hearing a white person say, “Negus, please.” Sure, it was definitely funny the first time I heard it on Tosh.0, but it’s just mad weird to hear it in person. It feels like a loophole that allows you to be racist without the label of “being racist.” I love Tosh.0, but lately I’ve been worrying that it’s pushing the limits of socially acceptable racism.

Our post-Obama environment is obviously anything but “post-racial.” Anti-immigrant sentiment is ratcheting up, especially against Latinos. Glenn Beck’s “Obama is a racist” moment is the tip of a creepy iceberg with that sick bastard Mark Williams hopefully occupying the bottom. Williams, you may recall, is the lovely fellow who published a disgusting and fake open letter from NAACP President Ben Jealous to Abraham Lincoln, calling Lincoln a racist because “Freedom means having to work for real.” The Shirley Sherrod fiasco is emblematic of a resurgent white victimization narrative bubbling over from what I hope is the fringe of the Tea Party movement.

Like it or not, Tosh.0 is emerging as a part of the cultural discourse in this country. The Comedy Central show’s second season is a smashing success, especially among 18-42-year-old men. Anecdotally, almost everyone I know watches and loves the show. People quote it constantly, reminisce over its jokes. Not since The Chappelle Show has a television program jumped into the young male zeitgeist so quickly. Brilliantly, host Daniel Tosh has made it one of the first truly interactive shows, responding to Tweets on the air, YouTube-ing with Internet celebrities, and even making his studio audience actively take part.

Although some news outlets compare Tosh to other clip shows like The Soup or Web Soup, I actually think it compares better to The Chappelles Show. Like Dave Chappelle—and unlike the Soup hosts—Tosh is bombastic, will say anything about anyone, and is especially keen to talk about race. Tosh is a divider. He lives for the contrast and communal conflict. He reps upper-middle-class, white, hegemonic culture but doesn’t seem sure what to do with it. His off-the-cuff remarks often consist of pointing out the shocking, lesser-known/lesser-spoken types of stereotypes: black men refusing to give oral sex, illegal immigrants hanging outside a Home Depot, jewelry-laden blacks being poor tippers.

Chappelle, though, did more than spout out stereotypes. He mocked our discomfort with each other, delved into the inanities and subtleties of various communities and gave us a window into black culture, his culture. The message was that we are all the same at our core, and those surface differences are what make people weird and funny as shit. There was something delightfully, well, post-racial about it.

Unfortunately, Tosh often teeters too far the other way. Tosh’s community, the upper-middle-class white male, seems to be the calm eye in a storm of crazy people. Tosh reserves empathy for wealthy whites (it’s important to make the wealthy distinction—poor people of all colors get lambasted) that he rarely bestows on anyone else. He hits on the harmless stereotypes: whites are poor at sports, a little too stiff, and definitely can’t rap. A couple weeks ago, Tosh showed a video of a white beating up a Latino in a schoolyard fight, cheering for the white guy the whole time, shocked when he actually wins. He harps on the physical deficiencies, and recently ad-libbed about how any “real” black person could beat him up (the only exception he felt would be Prince).

Aside from merely adding new racist jokes to our repertoire, Tosh is, in his own way, building on the white victimization line with this sort of rhetoric. He contrasts his financial responsibility, education and “sensible” lifestyle with the out-of-control “other.” His whites are supposed to fear minorities’ physical superiority, yet, also be proud that they maintain their dignity. I know Tosh isn’t responsible for our current climate, but he knows what’s going on (he has a segment titled “Is It Racist?” for goodness sakes, which included the outrageous “We Speak English” ad). He’s shown moments of sensitive awareness in the past, too, appearing in a “Legalize Gay” shirt during a segment. But racial bigotry seems to be a bit too tantalizing.

I get the shtick. Tosh is an outrageous dude, says outrageous things, and isn’t meant to be taken seriously. That may be true sometimes, but the show is far from apolitical. He openly rants and jokes about race, sexuality, gender issues, religion, nationality and politics. Considering the vile stuff he says about just about everyone else, I just wish he would turn that sharp tongue on himself every now and again to take the edge off. Upper-middle-class white people deserve to be made fun of, too.