Are Men Still Afraid of Hugging? 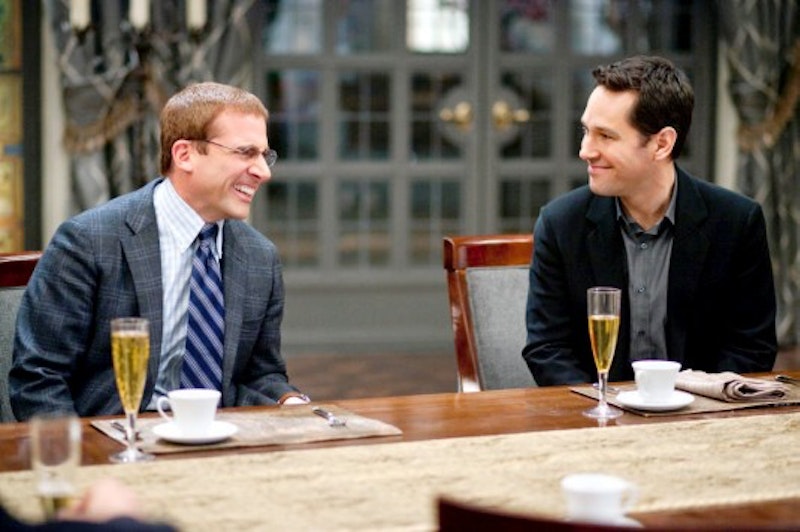 Reviewing Dinner for Schmucks was a challenge, not only because the film itself is neither here nor there, but also for all the constant grunts, groans and grumbles from the mostly male audience.

What was all the fuss about? After all, Dinner for Schmucks is a benign little movie, designed to offend as few people as people. It barely ranks on the faux-pas scale to Paul Rudd and Steve Carell’s work in the gross-out Apatow oeuvre.

The problem was male bonding, or rather, male-on-male intimacy. I’m not talking about sex, for those of you who haven’t or refuse to see Schmucks. I’m talking about minor instances of two men innocently disobeying the rules for masculinity.

The instances are so minor I can barely recall them. At one point in the film, Carell’s character, who is supposed to be stupid and awkward, straddles Rudd’s character, who has thrown out his back. At another point, Carell hugs his new friend Rudd for about, I don’t know, maybe three seconds. A bit later, when Rudd heads to bed, Carell, inexplicably I might add, asks to join him.

The jokes, if they are jokes, really aren’t funny. At least to me. But judging from the reaction of my audience you’d have thought Carell and Rudd were in the first stage of a torrid love affair. To my audience, this inconsequential male bonding came off as more disgusting than Carell’s rodent taxidermy or the paintings of the artist character played by Jemaine Clement, which included Clement in various bestial and demonic poses.

It was a curious experience, since it flies in the face of most statistical evidence on Americans’ acceptance of homosexuality, from perceptions of gays as people, gay marriage and civil unions, all of which, polls show, people are growing increasingly accustomed to. It even contrasts the Hollywood trend of bromance movies, a tradition Dinner for Schmucks continues.

What’s going on? I hasten to extrapolate from anecdotal evidence, but there may be a subtle, not-so-mainstream reaction against the prevalence of homosocial and gay desire in television and film. In order words, as men are perceived as softer and gayer, some men—in my case, young urban (not necessarily black and Latino!) men—react against it, trying maintain the boundaries of what it means to be a “man.”

We see this again and again, and not just among straight guys. In the 1970s, gay men reacted against the increasingly visibility of queens by adopting the hypermacho “gay clone style.” This tradition lives on today, from gay Republicans who claim to be more “macho” than Democrats—see Homocon’s recent poster—to the thousands of men on hookup sites who identify as “masc” or “straight-acting.”

And it’s not confined to the young and uneducated, as some stereotypes might assume. As few years ago, Harvard professor Harvey Mansfield caused a stir from his book Manliness, an attempt to define and assert the importance of “masculinity”— aggression, intolerance and it all.

From my ears, however, the cries from my audience were coming from the under-50 set, the generations of men who are supposed to be most comfortable with male bonding and less macho men. Once again, anecdotes are unreliable, but I know from experience walking through the streets of presumably liberal New York, that I—either with my partner or alone—am not necessarily welcome in the club of manliness.

It’s all a bit tiring and sad. “Masculinity” is not going to go away, and as unnecessary as the concept is, I’m not demanding it needs to disappear. But I’m concerned about any threats to the country’s affirming “free to be you and me” ethos or the presumed progress being made in the culture, opening up what it means to be a man.

Is it impossible for Steve Carell to hug Paul Rudd for a little longer than average, for two men to hold hands or kiss? Do men have to maintain, as writer Norah Vincent learned after a year of living as a man, such a stringent rulebook on what it takes to be manly? I must be exhausting.

There’s always hope though. For one, reports are suggesting Friday's fanboy release, Scott Pilgrim vs. The World, has a boyish gay character in Kieran Culkin, the best bud of straight boy Michael Cera: they share a bed, Culkin brings home boys and everyone keeps their cool. How manly.