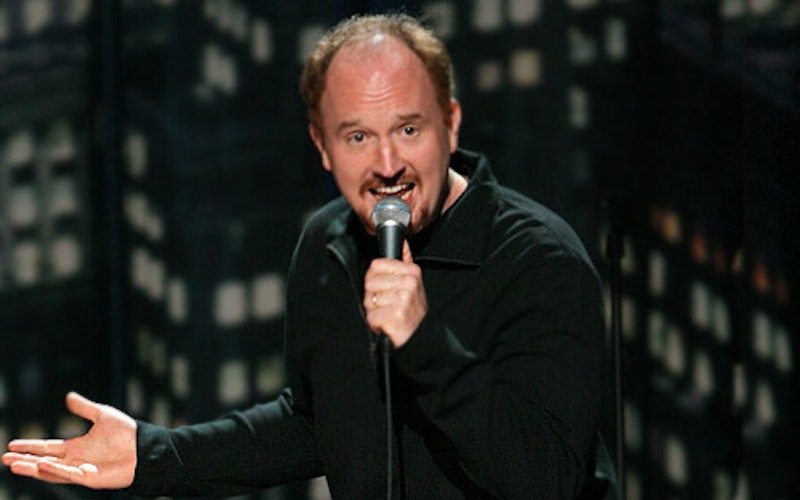 I’ll admit it: I’m late to the Louis C.K. party. Widely regarded as one of the smarter, more talented stand-up comics around, C.K. nonetheless has only been kicking around the edges of popular consciousness, plying his trade on the likes of Letterman, Leno and Kimmel while reaping a handful of Emmy nominations for writing, winning in 1999 as part of HBO’s Chris Rock Show ensemble.

I’d seen some of his stand-up, predicated in part on his average Joe looks: a redheaded, balding, slightly overweight guy with a goatee who could say some pretty outrageous things. He was funny, but not funny enough for me to tune in to HBO’s one-season-and-done Lucky Louie sitcom of a few years ago, or to stick long with cable airings of his big-screen efforts, almost all of them connected in some way with Rock’s uninspiring movie career. Co-writing the lackluster remakes Down to Earth and I Think I Love My Wife didn’t bode well, and writing and directing the singular Pootie Tang—based around a Rock Show character whose patois is almost completely incomprehensible to anybody—left me convinced that C.K. was one of those “wacky” talents that I could safely ignore.

I was also put off by his name. Louis “C.K.”? I neither knew nor much cared what the initials stood for, but assumed it was something sufficiently scatological, not to be printed in family publications.

But then Louis started creeping further into my life. There was his well-done turn on Parks & Recreation as Leslie Knope’s lovelorn cop pal, Dave Sanderson, played by C.K. so modestly that he nearly effervesced off the screen. Another low-key performance, as one of Ricky Gervais’ befuddled pals in the underrated film The Invention of Lying, further intrigued me.

So it was that I tried out Louie, his new sitcom on FX—a channel that, like C.K. himself, I’d grown accustomed to ignoring. The show (airing at 11 p.m. EST on Tuesdays), which owes a debt to Curb Your Enthusiasm, finds C.K. as a fictionalized version of himself: A recently divorced father of two girls trying to re-introduce himself to the dating life, punctuated by excerpts from his stand-up routine, a la Seinfeld.

A snooze, yes? On paper, but at its best Louie is unlike anything else on television. C.K. specializes, like Larry David, in the discomfiting style of comedy, where scenes and situations tend to go on for much longer than TV’s usual rat-a-tat rhythm, with the result that its characters are often avoiding eye contact altogether by the time a scene cuts.

Unlike Larry on Curb, though, C.K.’s character usually doesn’t take any great pleasure in instigating these awkward situations. The half-hour episodes generally divide into two sub-stories that don’t necessarily connect with each other. Thankfully, the daughters have so far played very little part in the plots, turning up in the stand-up sequences much more often than they do offstage.

Louie still retains very much a work-in-progress feel: It’ll try some surrealistic touches (an older, female next-door neighbor of a blind date he’s waiting for flashes him in a simultaneously haughty and gleeful manner); delve into theories on why the word “faggot” works, or doesn’t, for some comedians (in a long poker-game sequence featuring several other comics, possibly the series’ high point so far); satirize Hollywood (Louie reluctantly agrees to a Godfather remake being directed by Matthew Broderick, only to constantly flub his line); and rework tried-and-true sitcom staples in fresh ways (meeting a fan leads to a near-death experience with her psychotic brother; commenting upon airlines’ shortcomings climaxes with the plane almost crashing).

Even the old stand-by of dealing with hecklers came to ugly life on a recent episode, when Louie delivered a bleep-filled tirade at a back-talking female patron that included such plums as “Can you do me a favor and please die of AIDS?”, a mock-surprised “You don’t like rape?” and the always-winning “You wouldn’t even exist if your mom hadn’t raped that homeless Chinese guy.” (When the woman protests that her mother’s dead, Louie replies: “Good.”)

I realize that I’m not doing the show justice. If you’ve seen it you understand, and if you haven’t—give it a shot. FX has already renewed Louie for a second season, and I’ve added Lucky Louie to my Netflix queue. I may even give Pootie Tang another shot.