Damsels in Distress fails to live up to director Whit Stillman's lofty standards. 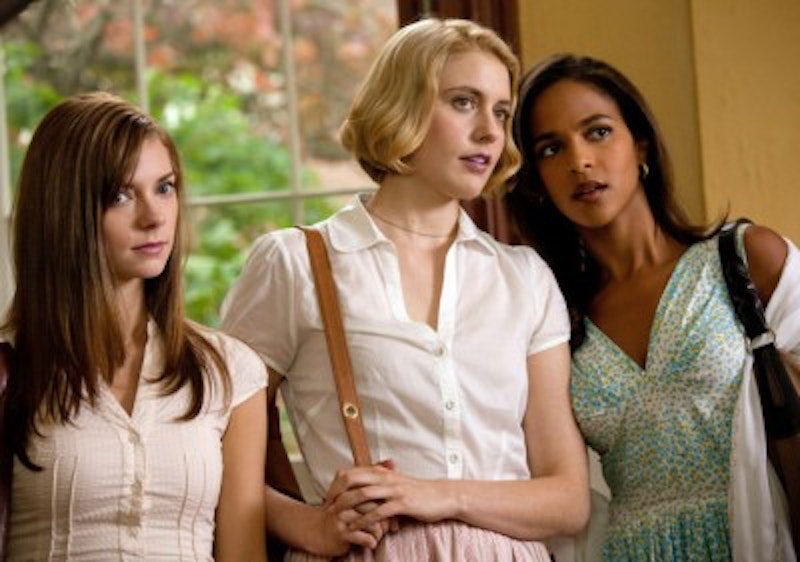 Whit Stillman returns after 14 years with another comedy of manners about bourgeois young people living in Jane Austen’s perfect world. There’s a cell phone here and there, and maybe a reference to the Internet, but Damsels in Distress is a film markedly out of its time and very awkward in ours. Greta Gerwig, Analeigh Tripton, Megalyn Echikumwoke, and Carrie MacLemore are the damsels, heads of a crappy suicide prevention center at an haute East Coast university filled with smelly jocks and delicate, pristine females. The damsels, especially Gerwig’s Violet, are over-educated and verbose, just like Metropolitan’s Rat Pack, but unlike the latter’s visual and emotional realism, this movie is as contrived and cheesy as an inedible birthday cake.

Damsels was shot digitally, and every shot glows with this sort of Douglas Sirk sheen: it’s slightly soft, very sensitive to light, and this strange hue that makes it look like Ted Turner’s coloration of Casablanca. Everything looks as if it belongs in some 90-year-old woman’s stationary shop, but the cast’s unease with Stillman’s turgid dialogue is plain to see in pretty much every scene. Gerwig delivers lines like, “Do you know what's the major problem in contemporary social life?” with the robotic cadence and flatness of a high school drama student. None of these guys or girls know what Whit Stillman is on about, at all. They ramble and drone in conversation after affected conversation about nothing at all, and it’s obvious they don’t believe in what they’re saying, because it’s practically gibberish. At its worst, it’s blue-blood collegiate pretentiousness led by cardboard cutouts of punishingly boring and vapid girls.

Stillman swerves between pretentious and witty, but even when certain jokes hold up, the whole aura of the thing is so fake and dull it makes you sick. Still, there’re several handfuls of great, sharp one-liners and ping-pong conversations that could’ve been harvested into a better, more unified and strong script. Especially Thor, the wealthy football player who skipped kindergarten and never learned his colors (his triumph is learning the colors in the rainbow). Instead, as Anthony Lane put it in The New Yorker, we get Stillman’s version of Clueless, or Mean Girls, but there’s no life or spectacle in it at all.

This is a 60-year-old man rehashing his old films and old ideas and applying them to a world he obviously knows nothing about. That would be fine, but his execution is so clumsy and dull that he just comes of as bumbling. This kind of movie would be acceptable and expected if Stillman was like Woody Allen and put out a movie or two every year. It’d still be a dud, but it wouldn’t matter as much. Twenty-five percent of his filmography is now shit. C’mon Whit, make it up with a fifth. Get your former star Christopher Eigeman this time.