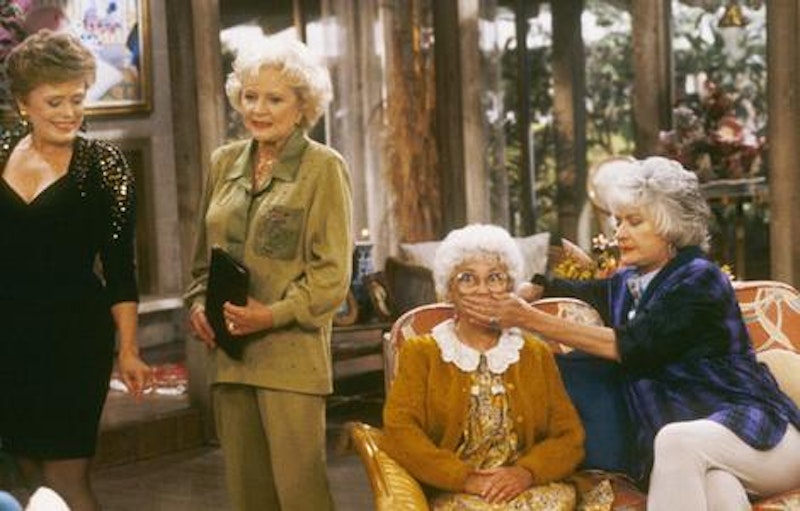 There was a time, not long ago, when I thought I could theoretically go on watching and writing about The Golden Girls forever. Turns out that I was half right: I am not even half sick of the semi-formulaic antics of three comediennes and their curmudgeonly octogenarian sidekick, their wisecracks, their washed out décor, their teased and tousled ‘dos, their flawed beaus. Yet I’m sick to death of writing about these four. I’m close to being out of things to say, and besides, the title’s tone feels snotty in light of the fact that this 80s/90s sitcom never quite stopped feeling young.

So this is me quitting while I’m ahead, and leaving you with YouTube links to the show’s 10 best episodes in the event that you’ve got the curiosity and free time to try to figure out why a 35-year-old African-American father of two can’t get enough of The Golden Girls. If you come to any sort of conclusion about that, drop me a line, will you? Because I’m just as baffled.

You know those old commercials where a family returns home to find only a telephone waiting for them? “Break-In” is about a thousand times funnier than those commercials. The girls return home after a Madonna (!) concert to discover that their home has been burgled. Rose (Betty White) freaks out, buys a gun, and almost blows a dude away. Sophia (Estelle Getty) fakes like the invaders stole her crap wardrobe. Blanche (Rue McClanahan) believes her jewelry has been stolen, but it turns out that she forgot where she stashed it.

Key scene: Blanche covered in flower after checking that container for her jewelry, and Dorothy (Bea Arthur) quipping “but I see they didn’t get your cocaine!”

Blanche’s niece comes to visit, is a total slut, film at 11. The piece de resistance is the niece’s last boyfriend, who’s convinced that he’s a Miami Vice extra.

Key scene: The Miami Vice-obsessed boyfriend enthusing about how he and a few buddies are getting together “to go through Don Johnson’s trash!”

In of the show’s more sobering episodes, Sophia appears to suffer a heart attack after the girls throw a dinner party. Of course, this happens during a storm, the roads aren’t clear, and there is a great deal of rending of hair, and emotion, and Lazy Susan reminiscence, and of course, it turns out that Sophia was having a gall bladder attack brought on by overeating. But this one gives me pause no matter how many times I watch it, because what if the time you’re spending with a loved one is the last time you’ll ever spend with them? What if it was, and you knew it was?

“Ladies of the Evening” (Season 2)

Full-on farce, with the vice squad mistaking Blanche, Rose, and Dorothy for hookers while they’re waiting to meet Burt Reynolds and a spurned Sophia actually getting to party with Reynolds, who cameos at the end in total sex-icon mode. Yes, the Golden Girls do wind up in the slammer at least once.

Key scene: the entire episode, seriously. These writers were on fire.

Rose flips out on the neighborhood hag over a majestic old tree and inadvertently kills her, then the girls pay for the hag’s burial. Features the only reference to Menudo that I’ve ever encountered on television, as a sort of throwaway punchline that fizzled—the studio audience either didn’t get it, or weren’t amused.

A famous actor comes to town to play a lead role in a local theater production and winds up banging almost every woman in town on the sly, including Blanche, Rose, and Dorothy. There’s a great bit where he shows up at their house and improvises his way out of being found out as a three-timing cad.

Key line of dialogue: “Do you read People magazine?”

Sophia befriends a man with Alzheimer’s disease; Blanche gives away Rose’s favorite teddy bear to a little girl, and all hell breaks loose.

Key scene: Rose, to Blanche: “Cut the crap, Blanche, and get me the damn bear.”

“The Days and Nights of Sophia Petrillo” (Season 4)

See what I said about this one here.

Miles (Harold Gould) sneaks out of the witness protection program—he’s Amish now—to see Rose, who unbeknownst to the girls is dating the Cheeseman, who’s sworn to off Miles for blabbing to the Feds about his illegal activities. Empty Nest’s Kristy McNichol shows up, all crushable and tomboy cute.

Key scene: another instance where the writers could’ve raised Jesus from the dead if they’d been so inclined, they just were that on-point.

All sorts of hijinks when a photo-negative mishap creates the impression that Blanche slept with Rose’s husband before the two women knew one another.