Shining a light on the show's dark side. 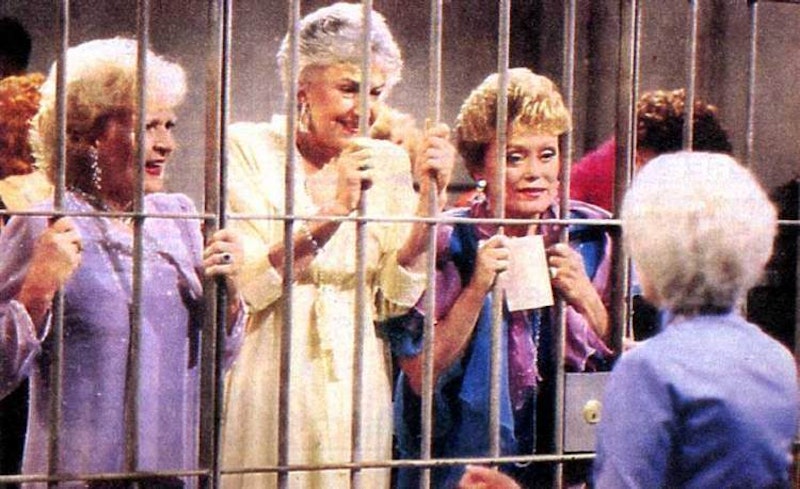 In every post-title introductory sequence that involves a sedan or taxi cab ascending the driveway—there aren’t many, just a handful—the driver always jams the accelerator until the last possible second, screeching to a halt just before it’s too late, avoiding plowing through the closed garage door by mere inches. I have no idea why this is.

There was a dark, elder-abuse undercurrent to Golden Girls in the antagonistic give and take between daughter Dorothy (Bea Arthur) and mother Sophia (Estelle Getty)—the former frequently fed up with the latter and threatening to re-commit her to a nursing home, the latter openly denigrating and undermining the former when not lifting twenties from her purse.

It wasn’t difficult to imagine Dorothy’s caustic temper, something she wasn’t always able to keep in check, landing Sophia in the hospital, and at times the show seemed to center on the state of open wounds in the fraught relationship between the two women; you wound up feeling sympathy for both, figuratively cuffed together at the ankles, the one conspiring with matchmakers to fix up the other, the other policing the one’s bustling social life as a parent might with a teenager.

And yet on some levels, theirs was the most fully realized family on the show, with Dorothy’s progeny defined as entities and reliably referred to and two of Sophia’s other children and siblings turning in memorable appearances—plus Dorothy’s ex Stan (Herb Edelman) yutzing cluelessly about, in effect bolstering a connection with an imagined reality pre-dating the chintz and pastel present Golden Girls existed within—with lovingly gritty references to a Brooklyn past and accompanying flashbacks so touching that they could have fueled their own sitcom.

Remember those Jackass routines where Johnny Knoxville would don an old-man mask and a Mister Rogers sweater and commandeer a Jazzy for the sake of fucking with strangers? If you found those conceits funny, but thought “this would be so much funnier with actual senior citizens,” then the Betty White-hosted Off Their Rockers may cause a soft drink to erupt from your nostrils.

Whenever Blanche (Rue McClanahan) fell in love, she got burned—the pilot is a prime example of this—which goes some way to explaining why she spent much of the series tarting merrily about.

(I can think of a few episodes that dangled the possibility of healthy, mature romance for Blanche, but the beauty of self-contained episodic television is that the writers can casually treat these teases as dead-ends, because sitcoms aren’t so much aboutdeveloping characters as sustaining what the viewer has come to expect from said characters. Remember: no hugs, no lessons.)

Ultimately, though, her late husband George was the love of her life. “Mrs. George Devereaux,” an episode from the sixth season—when the show’s vitality was arguably on the wane—makes this plain even as it offers one of the show’s most touching moments. The episode is in essence a recurring dream where Blanche discovers that George is actually still alive, having faked his own death, with a sub-plot where Sonny Bono and Lyle Waggoner battle, literally and figuratively, for Dorothy’s affections thrown in to lighten the mood and to heighten the surrealism of it all.

The dream ends, and we’re to assume, I suppose, that it always ends this way, with George entreating Blanche to again be his wife, and with Blanche unsure whether or not to say yes. And it’s interesting to think about on several levels, whether you’ve been widowed or not, because if you’ve loved and lost and moved on, how inclined would you really be to return to where and who you were, if given the opportunity to have someone back? George’s return occurs against a familiar backdrop of Golden Girls antics, where aged female solidarity has effectively replaced the matrimonial standard, and for Blanche to answer George’s question in the affirmative would be for her to turn her back on the friendships that have come to define her. But would the answer be “no”? Not necessarily, because we’re talking about a television show where every seventh episode offered the possibility of some willing suitor (or in one case, a wealthy Japanese businessman with designs on Blanche’s ranch house) breaking up the proverbial band. And in the back of our minds, we all knew that couldn’t happen, until suddenly it could.

Remember that one episode of Kate & Alley where everybody in the house was conspiring to make one of the moms—maybe it was Kate, but then again maybe it was Alley, who can remember—give up smoking? What if I told you that The Golden Girls had an episode where Rose (Betty White) tried to kick pain pills, failed, and wound up shipping herself off to rehab? Kind of puts things into perspective, doesn’t it?