Lena Dunham's Okay By Me 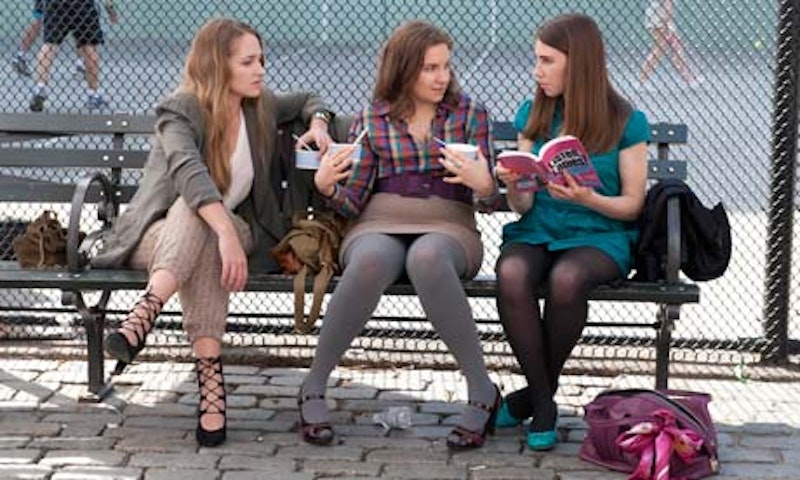 Lay off Lena Dunham. Her show Girls is not complicated: a look at the cloistered, confused, and clueless lives of post-graduate white girls with money and little motivation or direction. Dunham was born into privilege herself, and that makes a lot of people upset. A lot of crap has been flung over the absence of any substantive non-white characters in the show (besides a homeless black man and an Asian intern who’s good at Photoshop), as if Dunham has a quota to fill and sins to atone for. She’s 25 and has already written, directed, and starred in a feature film and now a TV show. That’s leagues more admirable than jealously shouting nepotism and doing nothing yourself. She’s said that the show’s lack of minorities was “a complete accident,” and I believe it. The show’s about self-absorbed and ineffectual graduates with no purpose or innovation; its comfortable whiteness is totally of a piece.

These are not girls to look up to. Hannah (Dunham’s alter-ego), Marnie, Jessa, and Shoshanna piss their time away on petty internships, bad boyfriends, and awkward jokes. They go nowhere and accomplish nothing. Brooklyn is fetishized as a hipster Neverland where girls and boys can putz around for eternity “finding” and “becoming” themselves without having to think about the future or grow up (“You live in Cobble Hill? That’s like grown-up Brooklyn”). Some have said the show lacks self-awareness, but I find it hard to imagine Dunham could present something like the series’ opening scene—Hannah throwing a tantrum full of $10 words and liberal art babble (“I’m becoming who I am”) when her parents decide to cut her off financially two years after graduation—without realizing it makes her look like a scumbag. If Dunham really thinks Girls is the voice of her generation rather than “a voice of a generation,” she deserves every barb, because her characters and her universe couldn’t be more vacuous. But I don’t think Dunham was going for endearing. At least I hope not.

Besides, it’s far too early in Girls’ first season run to condemn it as a nepotistic circle jerk. Dunham has her sect down pat: they’re oblivious, self-centered brats who have it made. They’ll have to work someday, but reluctantly, without anything to call their own or be proud of. At her age and with her already impressive record, Dunham is not a narcissistic layabout like Hannah, no matter how badly you want her to be. She’s smarter than you think.