Cold Pursuit is a black comedy in the vein of Miami Blues or Repo Man. B- 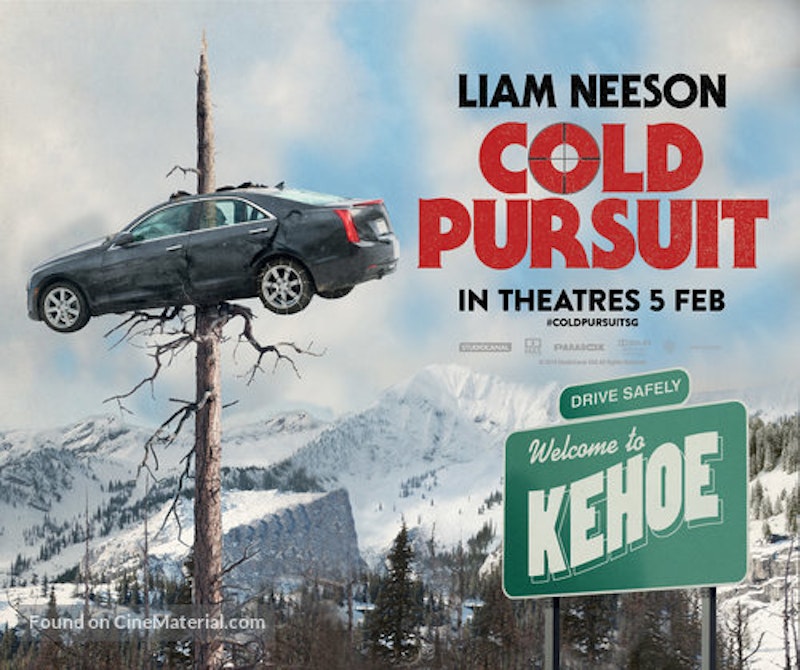 Liam Neeson was promoting a movie when he, apropos of nothing, admitted that he roamed the streets of Ireland carrying a “cosh” keeping his eyes peeled for a black man—any black man—that he could brutalize after a close friend was raped by a black man. Cold Pursuit, the movie Neeson was promoting when he went a little too method, has been buried under reflexive outrage and some valid discussion not only about race but toxic masculinity, how Neeson was taking his relative’s trauma and claiming it as his own cross to bear.

Three things got lost in the hysteria: Neeson was walking around Ireland—his chances of running into or even seeing anyone that didn’t have mottled pink and gray skin were slim. Second, what if he was speaking in character? The Guardian speculated on Saturday that Neeson said what he did because he lost a bet, but how do we know it wasn’t a bit all along?

And finally, because no one cares about the actual movie anymore, no one knows what it’s about or what it’s like. Everyone assumed it’s Taken on the slopes, and its basic premise is nearly identical to that series: Neeson’s son is kidnapped and murdered during a minor drug deal gone awry. The cops are no help, they say he died of a heroin overdose, but Neeson insists “he wasn’t a druggie.” Commence 100 minutes of wanton, comical killing in fictional Kehoe, Colorado. Every person who dies is memorialized with a title card bearing their given name, nickname, and a symbol. After the climactic shootout between the cops, the cowboys, the Indians, and Neeson, a title card appears with a dozen names. They will be missed.

Cold Pursuit has a close cousin in Greg Armitage’s underappreciated 1990 film Miami Blues, another black comedy disguised as an action movie. Alec Baldwin plays an hilarious sociopath who kills dozens of people with a smile on his face, Jennifer Jason Leigh is the hooker with a heart of gold, and Fred Ward’s the dumb cop. It’s great. Cold Pursuit has more in common with Repo Man, Eating Raoul or even Robocop than the dour, dim, and depressing Taken series and all of its iterations (remember Ransom?). Everyone’s a scumbag, sociopath, idiot, or all three. The two Kehoe cops we spend any time with—a young woman and an older man—are as feckless, reckless, and petty as the people they’re pursuing. He’s a very live and let live, look the other way kind of officer: “People come to Kehoe to ski, have sex, and get high. We’re here to enforce the values of the community.” She’s more hard-nosed, eager to arrest teenagers for smoking pot outside a ski shop. Instead she puts that energy into investigating a turf war that doesn’t exist between “the cowboys and the Indians.”

Like Miami Blues, Cold Pursuit is a little too long, and the clunkiness of the script—particularly the seventh generation Tarantino style dialogue—suck the life out of the first half hour. But by the time Laura Dern has left Neeson and the picture, leaving only a blank card, Cold Pursuit accelerates into a proper bloodbath. It’s very silly and a lot of fun in places, and if it were half an hour shorter it could be great. But in 2019, dark and disposable murder comedies prompt very serious roundtable discussions on race, female agency, and fragile masculinity. Cool...?