The hoax as art form. 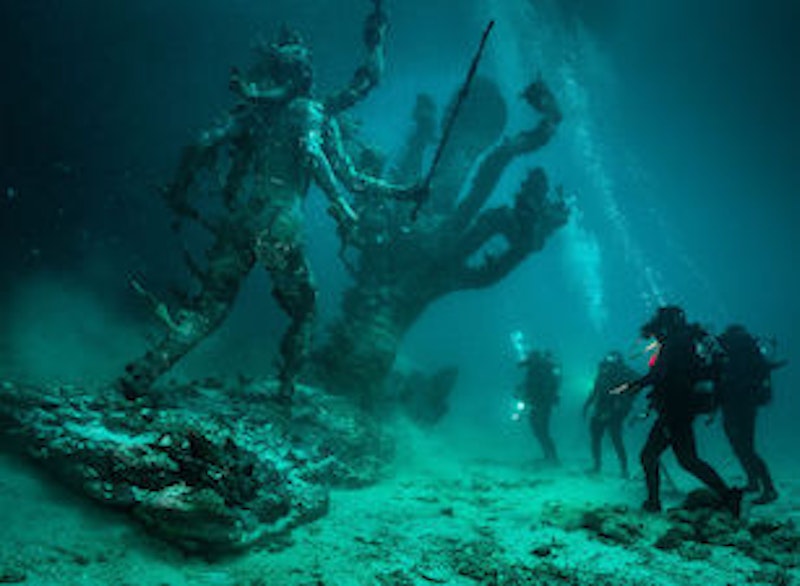 Giant spoiler: not so long ago (2017) there was an eccentric artist who faked an entire shipwreck, created giant art-piece imitations of amusement-park style “artifacts” that he sold for millions of dollars, then made a documentary about the entire wreck which you’d think was real if you weren’t paying attention. The end.

It’s called The Wreck of the Unbelievable, I’m still trying to make sense of it, and I don’t know whether to be in awe of Damien Hirst or think he’s a complete nutjob. Either way, I’m fascinated by the magnitude of the thing. Faking a shipwreck.

Art critics called it “undoubtedly the most expensive artistic flop in living memory” with Art News piling on that the show was “undoubtedly one of the worst exhibitions of contemporary art staged in the past decade. It is devoid of ideas, aesthetically bland, and ultimately snooze-inducing.” So they don’t have any doubt. The Guardian was a bit kinder: “It is by turns marvellous and beautiful, prodigious, comic and monstrous.” There were a range of reviews that can be found in this piece “From Genius to Ugh: The Most Extreme Reviews of Damien Hirst's Massive, Polarizing New Shipwreck of a Show in Venice.”

The Netflix documentary tells the (unclearly fictional) tale of Cif Amotan II (it’s an anagram.* << see end of article for solution), a freed Roman slave from 2000 years ago whose ship the Apistos (or “Unbelievable”) was crawling with giant gold, marble, and bronze statues in very convenient classical designs of sea and mythical creatures and are retrieved in stunning condition with little sea-wear. The staged shipwreck and creation of its fake artifacts cost the artist $65 million; it’s unclear how many millions he made back when they were sold at auction.

The question is why. The answer is art, because there’s no other answer. The only reason I knew the entire shipwreck was fake was because I Googled it first looking to see where to watch it; a number of people had asked if I’d seen it. Otherwise, like everyone else I guess, I wouldn’t have found out it was all bullshit until he showed the Mickey Mouse statue at the end, and at that point I would’ve been completely confused and had to Google it and then just been annoyed I’d spent 90 minutes watching what I thought was a documentary but what is actually a mockumentary.

It’s listed as a mockumentary, if you happen to notice that. It’s not funny, like a Christopher Guest mockumentary. Damien Hirst thinks he’s clever, so he says ironic things like “What makes you believe in things is not what's there. It's about what's not there.” I mean he names it “The Unbelievable.”

But it must be rich people art, the “My art is so artsy you can’t even afford to understand it so don’t ask questions” kind of art, because I’m mystified by the concept of how faking a shipwreck is art. The Unbelievable is more performance art than anything—which I’d have a much easier time understanding. His previous multi-million dollar art installation involved dead sharks in formaldehyde and a rotting cow skull breeding maggots. How anyone can call that shit art is beyond me, yet millions of dollars were spent purchasing the dead animals.

Art is subjective. And this is fascinating—even knowing going in that it was all fake, I was interested to watch the wreck unfold. But there are thousands of real shipwrecks at the bottom of the sea that are far more interesting to me than a wealthy artist’s fake one.

*I AM FICTION (for Chrissakes).