Shaft remake is more interesting and fun than expected. B 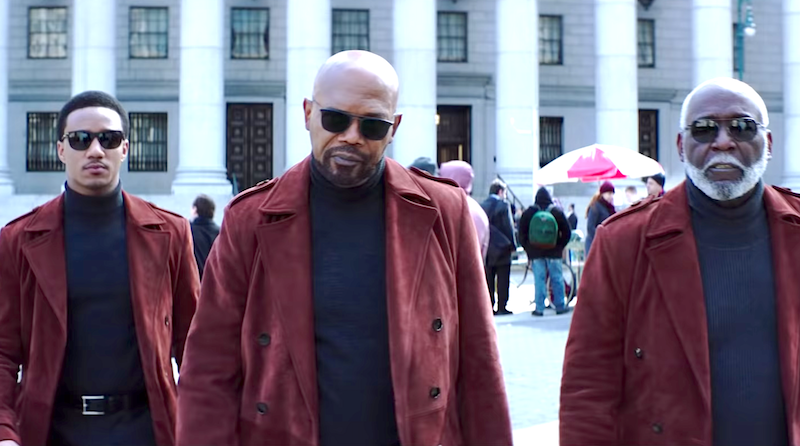 The latest movie version of Shaft is much more interesting than expected. It's a significant departure from the Shaft movie tradition, in that it's more of a pure buddy comedy, most of it based on generational clash. The film's politics may be somewhat reactionary and informed by lazy Millennial-bashing. But Shaft delivers a lot of laughs, the action sequences are well done, and Samuel L. Jackson, completely unleashed, is a lot of fun.

Shaft began life as a series of novels by Ernest Tidyman, which were adapted into a series of seminal blaxploitation films, beginning in 1971, with Richard Roundtree playing the titular private detective John Shaft. Shaft got a remake/sequel in 2000, directed by the late John Singleton, and starring Samuel L. Jackson as Shaft, who was depicted as the "nephew" of the original Shaft, and as an NYPD detective rather than a private eye. That film, while it had some comedic elements, was more about applying the Shaft iconography to a hard-boiled crime drama.

The new film is a sequel to the 2000 picture, with Jackson returning, alongside his estranged son JJ (Jesse Usher). The kid is a young FBI data analyst who has been raised by his mother (Regina Hall) and barely had any contact growing up with the "bad motherfucker" who’s his dad. But the two generations of Shafts soon find themselves teaming up in order to investigate the mysterious death of JJ's best friend. The plot pulls in various figures of the Harlem underworld, as well as both a mosque and a veteran's charity that may not be what it seems.

Roundtree also returns, and he's now retconned as the Jackson Shaft's father, even though Roundtree is only about six years older than the 70-year-old Jackson. And of course, the new film avails itself of Isaac Hayes' "Theme From Shaft.” Tim Story, the director, also made the Ride Along movies with Ice Cube and Kevin Hart, and here he applies that exact template to Shaft: It stars two black men, one of them (Jackson/Ice Cube) an older traditional tough guy type, and the other (Hart/Usher) who's younger and not nearly as manly.

The film was co-written by Black-ish co-creator Kenya Barris and touches on a lot of Barris' favorite subjects, most notably the intergenerational relationships between black fathers and sons. This film, though, heightens the contrasts, with Jackson a legendary ladies man who sees beating people up as the solution to most problems, and Usher as a Millennial who hates guns and violence while also knowing a lot about computers and apps. Most of the film consists of Jackson viciously insulting his son, with a touch of homophobia.

The idea is that they'll learn from one another, and they do to some degree, although the film's sympathies are clearly with the Jackson version of Shaft. It all but endorses the viewpoint that what "soft" Millennials need most is an infusion of traditional masculinity, complete with violence and mayhem, preferably involving automatic weapons in crowded public places. Normally I'd be repulsed, but Jackson is so good, and so committed to the bit, that I laughed along with it. It’s reminiscent of his performance a couple of years ago in The Hitman’s Bodyguard with Ryan Reynolds, an uproarious action comedy that just about nobody remembers.

As for the rest of the cast, Usher is fine as the son, even though he isn't quite as uncool as the script makes him out to be. Alexandra Shipp is highly appealing as JJ's potential love interest, while Regina Hall is welcome, as always, as JJ's mother.

But other elements of Shaft aren't as successful. Like a lot of remakes of 1970s crime films in recent years like last year's vile Death Wish with Bruce Willis, Shaft sort of pretends that it's still 1975 in New York and there's rampant crime at every turn. As for a subplot involving a mosque and suspected terrorism, it’s clumsy. Also, the talents of Titus Welliver are wasted as JJ's boss, who doesn't make much of an impression aside from a shocking joke about transgenderism.