The French horror film goes after women instead. 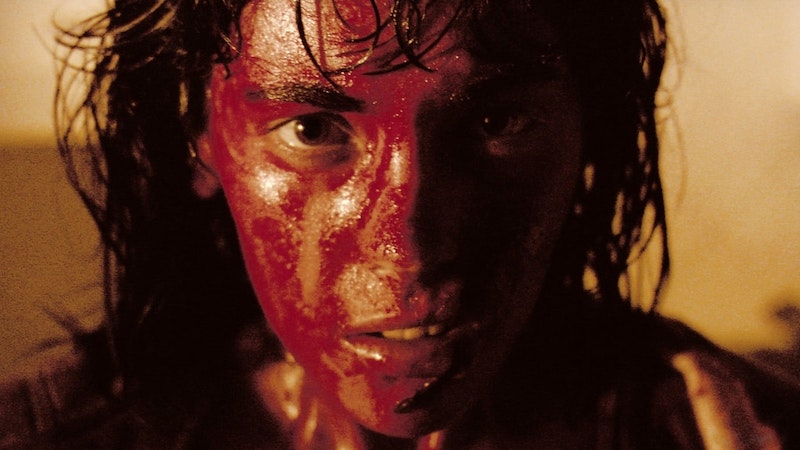 Rape/revenge films have a conflicted history. Some—like the execrable I Spit On Your Grave remake)—are just excuses to stage over-the-top exploitive sexual violence. But in other instances, like Ms. 45, the genre can serve instead (or in addition) as an openly feminist condemnation of sexism, misogyny, rape, and of the ways that all of those are intertwined in patriarchy.

In their rape/revenge film Kandisha, newly released on Shudder, French directors Alexandre Bustillo and Julien Maury avoid the exploitation. But they also sidestep the feminism. The result is a movie that feels oddly pointless.

The movie is centered on three friends and graffiti artists, Bintou (Suzy Bemba), Amélie (Mathilde Lamusse), and Morjana (Samarcande Saadi.) While completing a graffiti project, Morjana tells the other two about the legend of Aïsha Kandisha, an avenging female spirit who can be summoned Candyman style by repeating her name. Shortly afterwards, Amélie’s ex-boyfriend assaults and tries to rape her. She fights him off, and then, back home, staring in the mirror, she invokes Kandisha. The spirit kills the ex, and then sets about murdering the three girls’ other male friends and loved ones, as they try desperately to find a way to exorcize her.

The decision not to stage a rape onscreen is a reasonable and laudable choice. But avoiding the obvious feminist themes in a story of sexual assault is less understandable. Kandisha, we’re told in the film, is a woman whose husband was murdered by the Portuguese; they then tortured her. But the vengeful spirits targets are divorced from that structure of imperialist and implicitly misogynist violence.

In Ms. 45, the protagonist targets rapists, lechers, and blowhards. Not everyone she kills deserves death, necessarily, but they all embody and embrace patriarchal structures which say they are entitled to her body, her time, and her attention. Besides the ex-boyfriend, though, Kandisha doesn’t go after men who are guilty of anything other than being male. Her targets are in fact elaborately and increasingly innocent; they’re friendly, loving men and even boys whose sin is caring too much for the three stars.  Instead of a story about how patriarchy oppresses women, Amélie’s moment of rage and resentment at being assaulted leads to kind of male gendercide of the innocent. The original sin here isn’t patriarchy. If it’s anything, it’s resisting patriarchy, even in your heart—even in the privacy of your own bathroom.

Like The Craft, the movie could be read as a parable about the dangers when wayward girls seize power. The three friends are shown arguing with their parents, smoking pot, antagonizing police officers, and enjoying various acts of teen rebellion. These infractions of order are a slippery slope to chaos and male death.

The dangerous unconstrained force of female rebellion is symbolized by the Kandisha spirit (Mériem Sarolie), a figure out of misogynist nightmare. Hissing, bare-breasted, standing gigantically upon hooved legs, she’s an animalistic avatar of feral castration. Good girls obey the rules; bad girls destroy men, the world, and ultimately themselves. Even the Buffy-esque girl-power potential of the narrative is mostly dismissed; the girls don’t manage to save anyone. The only way to protect those they love is to remove their own corrupting presence.

I doubt the filmmakers intended their story to convey such a reactionary message. Rape/revenge is a volatile narrative though. It’s a genre that’s built on extremes of violence and politicized rage. If you aren’t very sure where you’re focusing that anger, it may possess you rather than the other way around.  Watching Kandisha, you get the sense that Bustillo and Maury summoned a demon they weren’t prepared to handle.