Whatever idle critics or tenure-seeking academics find, ultimately what matters most is that Doris Wishman’s 1965 film is far from boring. 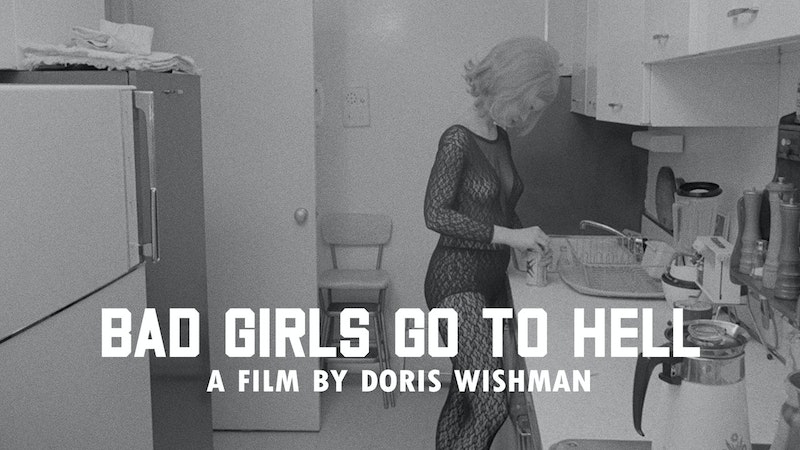 The programmers at the Criterion Channel have grouped a set of films into a collection they’ve called “Close to Home.” These are movies made by directors working in their homes—films shot where the filmmakers lived. It’s a varied group of titles, hinting at ways to think about living space, family, and the way everyday reality can be transformed into story and even into fantasy.

Take a look at the earliest feature in the collection, Doris Wishman’s 1965 Bad Girls Go To Hell. At first glance the no-budget exploitation film’s out of place on the channel. But watch it and you see how it fits: it’s striking and weird in thoroughly cinematic ways.

Shot in high-contrast black-and-white, it follows Meg, a Boston housewife who sees her husband off to work, and then is raped by her apartment building’s janitor. She kills the janitor and flees to New York, where she tells people she’s from Chicago and tries to find a home. Drifting from apartment to apartment, she has a relationship with an abusive alcoholic, and a lesbian, is raped by a landlord, and then her next landlady’s son turns out to be a Boston cop working on the janitor’s murder, and it turns out that the entire film’s been a dream as Meg wakes up in her Boston apartment and we get the opening of the film all over again.

There’s a hallucinatory feel to the 65-minute movie (as it appears on the Channel; a 71-minute version apparently also exists). The all-a-dream structure fits: Meg wanders through New York City with no sense of a past to her, unscarred and unaffected by anything that happens. Her journey’s marked with random shots of New York cityscapes and by random cutaways. All the apartments she finds have weirdly similar architecture, and all have the same parquet floor tiles—because all these scenes were shot in Wishman’s own home, redressed to turn it into half-a-dozen different places.

By the time Wishman made this movie, her ninth, she’d had a lot of experience in working with minimal resources. An actress and film booker who took up directing in her mid-40s, after the death in 1958 of her husband of five months, Wishman would make 30 low-budget exploitation films before her death in 2002 at 90, establishing herself as one of the most prolific women directors of the 20th century.

Without the explicitness of hardcore, you’re struck by the weirdness. The high contrast of the photography. The jarring, violent editing. The sound, dubbed afterwards, that floats above the images on screen. Dialogue scenes that cut away at odd times to shots of ashtrays, shoes or other random objects (because Wishman avoided sync issues with the sound by not showing the performers’ lips moving). And the surreal recurrence of the same apartment underneath every apparently different apartment, as though there’s no escape from the original scene, as though every location of Meg’s adventures is every other location.

Wishman did a good job of hiding her home. There’s a scene toward the end of the film where Meg lies back in a new apartment’s bed. It looks like the bed we saw her in at the start of the film, but that bed had a window on the right side of the bed and this one has a window on the left—except it doesn’t, not really. We saw the left-side window in the earlier scene, but don’t see the right-side window here, only bright light that mimics sunlight. And a closet unit (which we’ve seen a few times before already in different places) has been moved to stand between the bed and the actual window. Presto: a new bedroom.

Wishman redressed her home, reworking her living space multiple times to make up for her lack of budget. Making her movie meant thinking through the appearance and configuration of her home. Telling her story in her place meant reworking that place, and imagining different possibilities of what it could be.

One might argue that at the same time there’s a sense in which the character of the film never leaves her home—only returns to it, slightly disguised, over and over. The story’s a dream, nominally a woman’s fantasy that’s actually aimed for male viewers. Was Wishman saying something about a woman’s fantasy life, or playing to the audience?

Wishman didn’t give many interviews, but did tell one interviewer about her work “I just thought of a crazy idea, and I made a movie.” A storyteller does what they do, and the audience finds their own meaning in the result. Bad Girls Go To Hell is a powerful document: you can read a lot into it. Whatever resonance idle critics or tenure-seeking academics find, the point is that the film’s not boring. Which is why more than half a century on it’s a fascinating experience when so many of its better-crafted contemporary films are dull and dead.