Janicza Bravo’s Zola is beautiful and expertly composed, but it doesn’t have an ending. 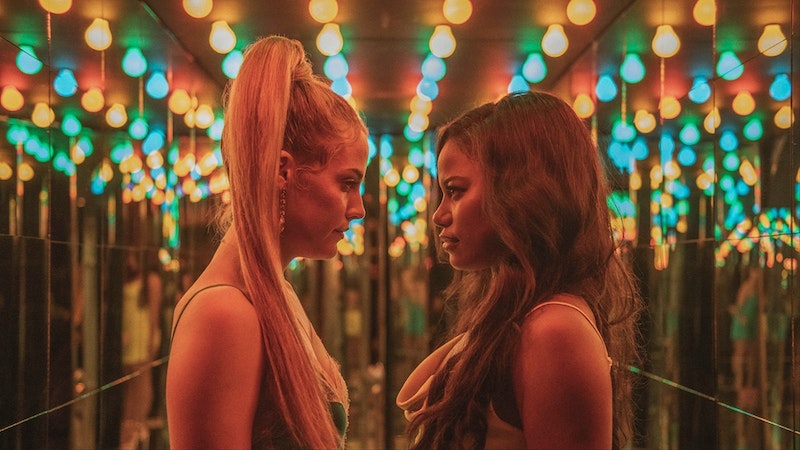 I didn’t like Janicza Bravo’s last film, Lemon. But I’m going to watch it again, because her new movie Zola, is so striking: a film that’s precise, funny, formal, and accessible, without putting too fine a point on anything. I don’t think my opinion of Lemon will change much, but in my experience, if I really hate someone’s movie, there’s a decent change the next one will turn me around, and I may become a big fan. Once you know a filmmaker’s patterns and preoccupations, it’s easier to avoid becoming upset, but even here one must keep any eye out for directors previously dismissed or never considered.

Zola is based on a Twitter thread. In 2015, Aziah "Zola" King wrote a thread on Twitter, 148 tweets beginning with: “Y’all wanna hear a story about why me & this bitch fell out????????? It’s kind of long but full of suspense.” King’s thread was funny enough to garner the rights to King’s story and a Rolling Stone article by David Kushner about the thread published a month later. [https://www.rollingstone.com/feature/zola-tells-all-the-real-story-behind-the-greatest-stripper-saga-ever-tweeted-73048/] King wrote the Zola thread on October 27, 2015, and while it sounds vaguely familiar, I missed it—unlike so many of the people that have written about this movie, or appear to show any interest in it.

Maybe it’s a holdover effect (Zola was shot in the fall of 2018, and premiered at Sundance 2020, the last major film festival before the beginning of the pandemic), maybe people are too risk averse in theaters at the moment and would rather see Summer of Soul (which I wish was a proper concert film—from what I’ve heard, almost all of the performances are interrupted by talking head commentary, an insult to the intelligence of the audience and yet another obstacle in the way of seeing this historic footage as is)—or, even worse, Roadrunner: A Film About Anthony Bourdain. I’m rarely taken aback or disgusted by the behavior of filmmakers vis-a-vis their work, but director Morgan Neville crossed a line here. In lieu of audio recordings of diary entries and comments given by Bourdain, Neville had an AI of his voice constructed so he could read these lines in voiceover, animated from beyond the grave. Horrifying, and disqualifying in every respect.

Unlike Lemon, which I found visually bland and staged poorly, Zola has very few shots that aren’t gorgeous or immediately striking. Zola (Taylour Paige) goes on a journey to Florida with a crazy white bitch named Stefani (Riley Keough), and they have fun (at first) and mostly misadventures with pimps, hangers-on, other pimps, and johns—endless, endless johns. Zola didn’t know about the johns on the way down to Florida: she works in nightclubs, she just wanted to dance. Stefani lied, people died. Most of this is fiction, but I’m not counting. Zola is an expertly composed movie, with blocking and rhythms reminiscent of Rainer Werner Fassbinder, a noted influence on Bravo (which, in retrospect, I should’ve picked up on with Lemon: that movie has a lot in common with Satan’s Brew).

There’s no plot more sophisticated than getting as much money for Stefani’s pussy as possible. This movie is quick, fun, and very funny: even the sound design acts as frequent comic relief (the “Send Tweet” sound plays often at the end of Zola and Stefani’s sentences, indicating a “citation” of part of the thread), and on the whole the sound in this movie is remarkable. Mica Levi’s score is wonderful, full of harps, smartphone chirps, and bed tracks that do evoke the fall of 2015, just as much of the film’s deeply saturated primary-colored lights immediately call to mind Drake’s “Hotline Bling” (a compliment).

My only problem with Zola is that there’s no ending—it simply falls off a cliff. Over gorgeous shots of a coastal highway, you sit in the theater waiting for a voiceover, a brief scene with two or three lines that’ll finish this incomplete sentence, this unresolved melody. But it never comes. A title card reads, “That’s THE END of the story for now.” That’s fine, but the movie nearly doesn’t work because of this hangnail of an ending. Sheila O’Malley called it merely a “quibble,” but for me it sealed a cap on the movie, and I know that I’m thinking about it less than I would’ve if not for that deflating ending.

Bravo’s Zola is beautiful and funny, a parade of striking images and sophisticated compositions. I don’t care how much of the movie hews to real life, and again I realize how important it is to periodically reevaluate the work of artists whom you loathe. You might be wrong.