The Specter and the Babe 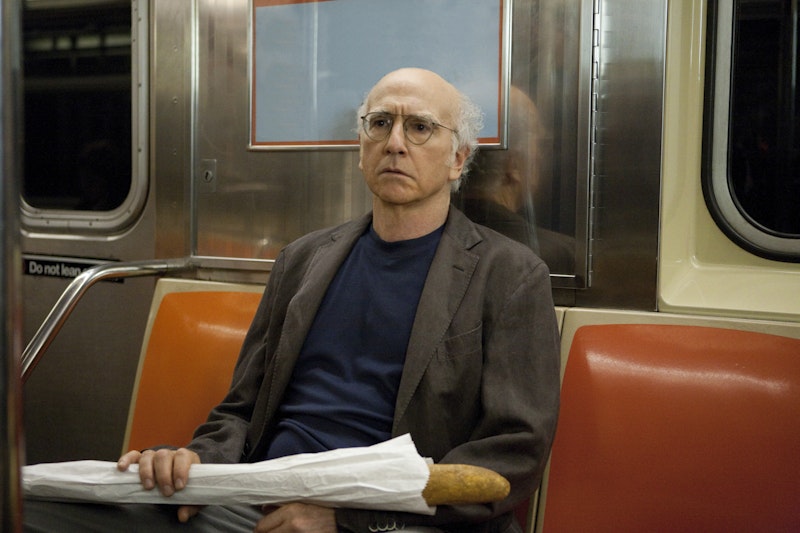 Age depresses me, especially when I watch late Larry David. Seeing David and his pals, now in their 60s, doing what they did in their 50s, back when Curb Your Enthusiasm was young—I don't know. They're never going to change, and their lives are flaking away like dead skin, and what's left are grizzled twists of flesh trying to cadge tickets to a special concert or arguing about a parking place. Larry's wife has left him, and it's not a problem after all. All those plots where he had to chase around to stay on her good side, and now he doesn't notice she's gone. It's not even like he's relieved. He's forgotten all about her; she is a mere leaf scar on his existence.

Larry and the gang have always been overgrown kids, but now they're skeletons. Too old to be teenagers, sure, but now they're getting too old to be alive. They're withered, and that makes a difference when you see someone getting in a sweat about fondling a luscious pair of tits. Richard Lewis sits in his spacious bed, a beautiful cupcake at his side, and he can't grab her giant orbs the night before her breast-reduction surgery, the reason being that his hands are bandaged up like the Road Runner dropped an anvil on them. There's Richard Lewis with his weathered gully face and his cascade of dyed hair, worn the same length since 1974, and we're supposed to think that the goofy thing, the ringer element, is that he can't grab her tits.

Somehow I feel worse that the woman looks like a young 30s but is actually in her 40s. The idea of an age-appropriate hot young fuck for a man that advanced in years, like now there are hot 40-year-olds because we've been getting so many adolescent 60-year-olds, and so much time has gone by. Worse, the episode is from six years ago. How old am I now? Oh. Never mind.

Netflix corner.  I didn't know Damon Wayans had a son. But the fellow is 30 or so and the star of a movie. He does comedies but he's an actor, not a tumler. His father horsed around like crazy, a squat whirlwind of attention-grabbing like the departed John Belushi. In fact, the dad Belushied himself right off the cast of Saturday Night Live, because on his first night he defied an order not to improvise live. Damon Wayans Jr. comes off as a different type. In Let's Be Cops (which you don't have to see) he plays the buddy who's always saying, “Let's be reasonable” and “You can't be serious.” Meanwhile, his madcap pal tells him not to be such a wuss. Finally, the Wayans character stops being a pussy, and with that change we have his arc, the payoff for his part of the story. Until then he's fretting and protesting, the guy who gets runs over.

But Wayans handles it well. You don't get sick of the guy, and you can see how the same man who did the fretting could also step forth and lay down the law. Both phases of the character work just fine, I guess because Wayans is giving us a performance and not a parade of stunts. I don't know if it's good or bad that work like this can show up in a time-waster like Let's Be Cops. But it's there along with the fart jokes, and his father should be proud.