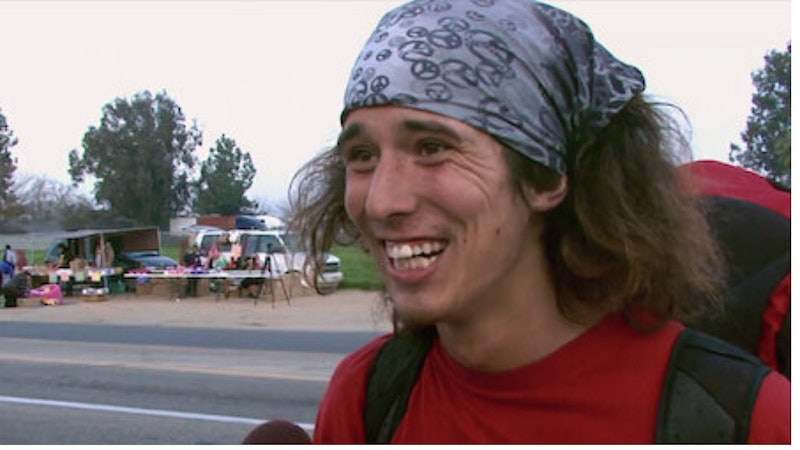 It’s possible that I take some exception with the term because I’ve seen it used to attack works that I believe are vital, like Larry Clark’s Tulsa and Mary Ellen Mark’s photos of Erin Blackwell, aka Tiny. Tiny was one of the main subjects of Streetwise, a documentary Mark made with her husband Martin Bell. I’ve no deeper emotional connection to a film than this one, which I first saw when I was 15. Is there a part of me that enjoys watching the scenes with Tiny, whose natural presence in front of a camera is almost unparalleled in documentary subjects? Absolutely. Do I think that makes the film pornographic? Of course not, because whatever vicarious poverty tourism I might admittedly experience is complicated by a host of other feelings—sorrow, anger, guilt, to name a few—which pornography, by definition of the word, doesn’t typically provoke.

But watching The Hatchet Wielding Hitchhiker, it occurs to me that poverty porn does exist. How else does one describe attempts by television producers to exploit a mentally-ill homeless man for must-see TV? Caleb McGillvary, aka Kai, gained national attention when he saved two people from a crazed motorist by striking him in the head with a hatchet. (The documentary sheds light on the fact that Kai smoked a joint with the driver before the attack that may have been laced, possibly inciting the attack.) The interview Kai gave to a Fresno news channel became a viral sensation (“Smash, smash, SUH-MASH”), landing him a Jimmy Kimmel appearance and almost his own reality show. Months later, Kai was wanted for beating 73-year-old Joseph Galfy to death in New Jersey, for which he was ultimately found guilty and sentenced to 57 years in prison.

The documentary does a decent job of offering a behind-the-curtain look at Kai’s media handling, documented in interviews with a bunch of vultures. To be fair, it’s a pretty wild story: the original reporter had no idea where Kai was, as he had no address or phone, and was forced to drive around looking for him in upstate California, eventually locating him in Stockton. The reporter tells Kai he’s famous and that his options are wide-ranging. Kai’s response? “I kind of just want to skate around the Bay Area and smoke weed.” (Kai is never more relatable to me than in this scene.)

When Kai finally agrees to do Kimmel, he makes a spectacle just about everywhere he goes. He’s kicked out of the Roosevelt Hotel instantly for skateboarding through the lobby and urinating on Julio Iglesias’ Walk of Fame star. He’s almost kicked off Kimmel before he enters the building, also for urinating publicly. He brandishes a knife in the street. He drinks uncontrollably. It’s clear to all his caretakers that he has severe mental problems, but no one’s willing to get him help, or at least rein him in. The content is too good.

When Kai finally kills someone, his media handlers are shocked, which feels disingenuous when you recall that he became famous by bragging on TV about splitting open a man’s head with a hatchet. The shock they describe is what most people would call shame or guilt, about the ways in which their treatment of Kai and his resulting viral popularity may have validated his most violent impulses and enabled him to commit such a crime. Or at least it would be, were they not shameless husks. The Kimmel “human interest” scout pays lip service to being wrong about Kai while insisting that it was important to put him on TV. A Kardashians producer discusses the opportunity to show the world someone who lives on the street “and likes it!” without a hint of irony. The only one who acknowledges any culpability is the local Fox reporter who first interviewed Kai, admitting that his original good intentions—to document the life of someone living on the fringes of society—led to a predictably destructive end.