Fear of Fear (1975) is one of Rainer Werner Fassbinder's greatest examinations of middle class repression and unhappiness. 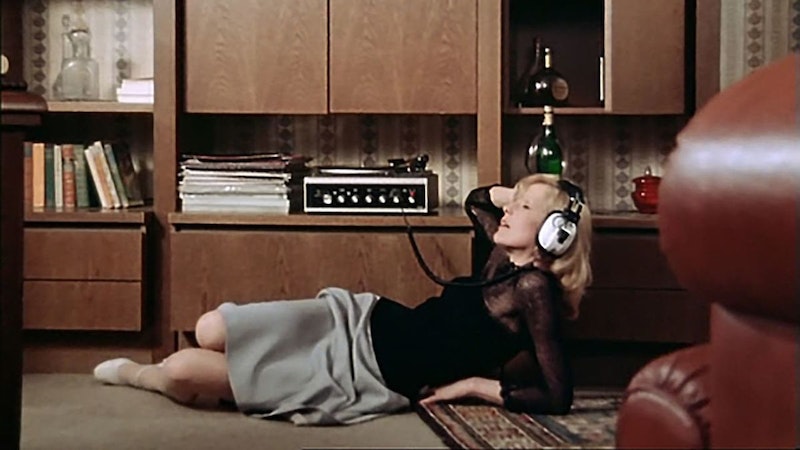 Margot Staudte stood in the middle of her kitchen. She’s pregnant and on the verge of giving birth. Her husband, Kurt, is sitting in the living room, puffing on a pipe and reading a newspaper. Her daughter, Bibi, is a bundle of impatience. Although she desired to make a cake with her mother, Bibi abruptly leaves the kitchen. Margot’s devastated. She feels and knows something is wrong. She’s face-to-face with the fear of going mad.

Thus begins a descent into madness of Margot Staudte, a middle-class woman from West Germany, living an ostensibly happy life. It’s the premise of Rainer Werner Fassbinder’s 1975 film, Fear of Fear. Typical of Fassbinder, this isn’t a mere commentary on social classes in West Germany, or the hypocrisy of bourgeoisie. Rather, it’s about a fast-disappearing woman, “a woman under the influence.”

Fassbinder chose Margit Carstensen to play Margot, a frequent collaborator. Here, we see similar expressions of unsteadiness and possession found in Fassbinder’s Martha (1973). Both Martha and Margot are imprisoned but through very different forces. While Martha’s under the spell of the sadistic husband (played brilliantly by Karlheinz Böhm), Margot’s enveloped in an invisible, fluid, and shape-shifting force.

After giving birth to her second child, Margot’s life begins to swiftly unravel. Her husband, Kurt, is a harmless man but clueless about what’s occurring in his wife’s mind. Despite the lack of evil intent, Kurt participates in an affirmation of Margot’s invisibility.

Fassbinder has strategically placed mirrors all over the Staudte apartment that serve as a constant and paradoxical reminder to Margot of her invisibility. Instead of being affirmed by her own image, and that she indeed does exist, Margot’s assaulted by her own disembodiment. She doesn’t want to be this way and so she seeks paths that ultimately lead nowhere.

Margot wants to be felt physically. She wonders how pain even feels. She swims furiously, “like a madwoman,” lap after lap, because it helps her “forget everything.” What’s mostly missing from her life is the physical touch of her husband. Once again, Kurt is oblivious to her needs, and obsessively concentrates on studying his mathematics exams. He’s not interested in Margot sexually, which is at the heart of the problem.

In order to remedy this lack of eroticism in her life, Margot begins an affair with Dr. Merck, an apothecary who has a practice across the street. His office has a convenient bed, which is regularly used for the affair with Margot. Merck is smitten by her and admits that he’ll do anything for her, which Margot finds pleasing (until Merck begins to bore her and she finds cognac and Valium to be a much better companion).

Fassbinder’s vision of masculine-feminine eroticism is rigid, and often marred by sado-masochistic relations. Men are rarely good to women and women oscillate between submission and control, caught in their own sado-masochistic spiral. Margot’s sexual relation with Merck is no different. Fassbinder’s camera focuses on Carstensen’s bony body, an uninviting proposition of sex. The woman is an object that Fassbinder both loves and hates. He wants to protect her, yet he despises her body. This attitude seems inseparable from Fassbinder’s own sexuality: a movement between homosexuality and heterosexuality, which are aesthetically mostly punctuated by hints of homoeroticism. (We see this especially in the way men are filmed.)

Despite this, Fassbinder humanizes human artifice. We somehow end up caring for Margot or Martha, and are repulsed and attracted by mad strangers and sadistic husbands. In Fear of Fear, Margot encounters Herr Bauer, a neighbor who apparently suffers from his own form of madness. He’s always there, a reminder that she too might be mad. Margot constantly runs away from him, yet Herr Bauer keeps popping up in an attempt to help her.

Bauer looks like he’s not only suffering from madness but also tuberculosis. He’s pale, yellow, his eyes are grotesque, yet he’s caring and loving toward Margot. Despite appearances, Bauer isn’t an evil force, yet Margot keeps running away from him as much as she’s running away from her own image in the mirror.

The climax of the film rests in Herr Bauer’s suicide. Instead of being upset by it for fear that her abnormality is synonymous with Bauer’s, and that the end is inevitable for her too, Margot’s “completely calm.” Unlike in Martha, which is fairly clear about Martha’s fate, in Fear of Fear, we see a nuance of Margot’s despair. Just as most of Fassbinder’s films invite several readings and interpretations, this film is no exception. Was Herr Bauer a representation of Margot’s madness? Now that he’s dead, is her fear dead too? Or will her fear increase? Carstensen’s overly stylized face and hair (an aesthetic similarity to Douglas Sirk’s films), and her red lipstick are just another artifice punctuated by an uneasy smile, always on the verge of madness.