One Night in Miami, released late last year, should not be overlooked as we head into 2021. 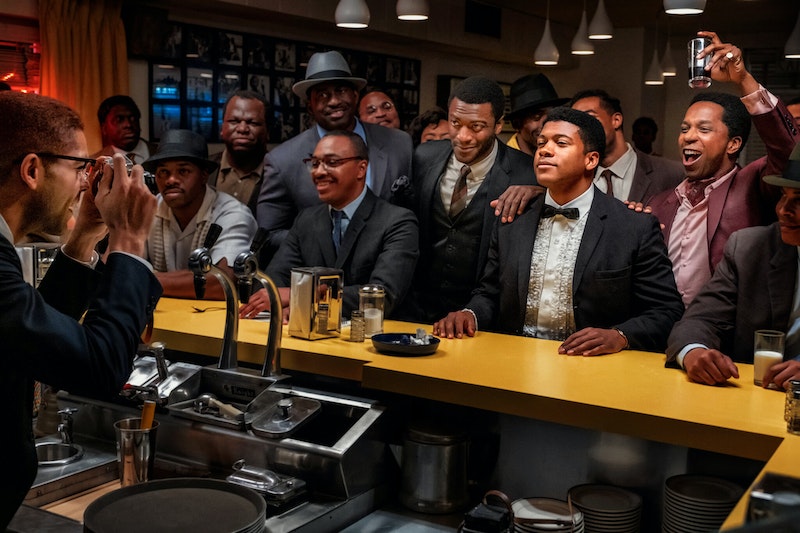 Put Cassius Clay—not yet known as Muhammad Ali—Malcolm X, Sam Cooke, and Jim Brown together in a room right after Ali defeated Sonny Liston to win his first heavyweight championship title, and you've got a good story. If only there'd been cameras rolling inside that Hampton House motel suite. Actor-turned-director Regina King helps us imagine what happened with her film adaptation of Kemp Powers' one-act play, One Night In Miami, a fictional account of that February, 1964 conclave of black icons.

King begins her debut film with four vignettes meant to introduce the protagonists, but the exposition bogs the film down. I suspect she included this as a counterbalance to the chatter in of the rest of the film, but the only segment that adds much is one showing NFL superstar Jim Brown (Aldis Hodge) returning to his Georgia birthplace, Saint Simons Island, and visiting the plantation-like estate of "Mr. Carlton" (Beau Bridges), a white grandee who's an old friend of Brown’s family. After they sip lemonade on the front porch and Carlton expresses his admiration for Brown and willingness to help him, the running back offers to help him move some furniture inside the house. "That's considerate of you, Jimmy," replies a smiling Carlton, "but you know we don't allow niggers in the house."

Carlton's racial insult, delivered with a velvet glove, drives home the point that no amount of federal legislation could erase all the challenges that black people faced. Employing dramatic license in writing that scene, screenwriter Kemp Powers, who adapted his own play for the screen, souped up an incident that once happened to Brown. While the four close friends who gathered in Miami all knew that the fight for racial justice would be long and hard, they had different ideas on how to go about it. This disparity provides the dramatic core of the film.

After Liston, the heavy favorite, refused to answer the bell for the seventh round, the buddies headed to Malcolm X's suite for an ostensible victory celebration. Jimmy Brown's stunned when Malcolm X tells him nobody else is coming to the "party," and Cooke and Ali aren't thrilled either. They wanted booze and broads, but Malcolm wasn’t a party animal. All he had to offer was vanilla ice cream.

Kingsley Ben-Adir's portrayal of Malcolm X gave me pause. I've always viewed the leader of the black pride movement as a towering figure with supreme confidence, but the British actor gives him a more vulnerable patina—this is the gentler Malcom X, at least some of the time. Preparing to leave the Nation of Islam, which will soon lead to his death, has thrown him into emotional turmoil.

A performance as solid as Ben-Adir's can dominate a film, but Leslie Odom Jr., playing Sam Cooke, is ferocious and magnetic. He sparkles in the scenes in which he's butting heads with his demanding buddy, Malcolm X, who doesn't think the singer's doing enough for "the movement."

Odom, a Broadway star (Hamilton) who's released three jazz albums, also sings three Cooke songs in the film, which concludes with him performing his protest anthem, "A Change Is Gonna Come."

Cooke and Malcolm are old friends, but they start sparring soon after the gathering commences. Malcolm asks Cooke if he booked his own room at the swanky Fontainebleau, knowing that he had a white person do it. When Malcolm reveals that "Cash" is converting to Islam, Cooke, the son of a preacher, calls it "Muslim jive." The radical activist, who looked down on Martin Luther King and once met with the Ku Klux Klan to discuss the creation of a separate black state, wants Cooke to be a protest singer, and the singer counters with the fact that he's a black businessman who makes his own statement about empowerment by owning all the masters to his songs and making money for other black performers.

It heats up when Malcolm mocks Cooke's songs and tells the singer that he's a "monkey dancing for an organ grinder," and that he's "just a wind-up toy in a music box." He castigates Cooke for putting teenybopper lyrics to the old gospel melodies he grew up with as their conflict approaches a crescendo. Malcolm puts Bob Dylan's "Blowin' In The Wind" on the turntable and asks Cooke why he didn't write that song instead of a white guy from Minnesota. The singer, who loved the Dylan song, does a slow burn and storms out.

Brown and Ali play the roles of peacemakers. Aldis Hodge's Brown conveys laconic cool and coiled intensity. Radiating presence, he doesn't have to say much to telegraph his power. You can see the ferocity in his eyes, as does one of Malcolm's bodyguards (Lance Reddick, an actor skilled at portraying barely-contained menace) before backing down from a physical confrontation with the football star. Hodge provides an unexpected moment when he suggests to the light-skinned Malcolm that light-skinned blacks are more likely to be racial agitators because they have something to prove.

Goree's Cassius Clay, only 22, projects less depth than his three accomplished friends, but the actor captures his ebullient wit and charm with the limited opportunities that Kemp Powers' script provides while giving hints of the seriousness lurking beneath the surface. The champ would be ready to carry the torch when Cooke and Malcolm X were gone, which would be within a year. That those two friends/combatants were both doomed as they argued about what to do in the future adds a layer of tragic irony to their conflict.

Those not sharing my interest in the subject material may find One Night In Miami ponderous. Regina King struggles solving the puzzle of how to avoid the claustrophobic feeling that films adapted from stage plays often suffer from. Lacking the intimacy of the stage, chunks of film dialogue with no action can get cumbersome. The director hasn't quite managed the conversion from stage to screen as well as—to cite a recent example—George C. Wolfe did in his excellent direction of Ma Rainey's Black Bottom, but her film crackles with intellectual energy and is buoyed by strong performances.

Most of us have seen photos and film clips of the demonstrations in front of segregated lunch counters of the south, Martin Luther King's March on Washington, and the other well-publicized civil rights events of the 1960s. This film offers a glimpse at what was going on behind the scenes as powerful black people debated among themselves about the best way to keep moving forward.