On Herk Harvey's only film, Carnival of Souls (1962), which refuses to conform to any easily recognizable genre. 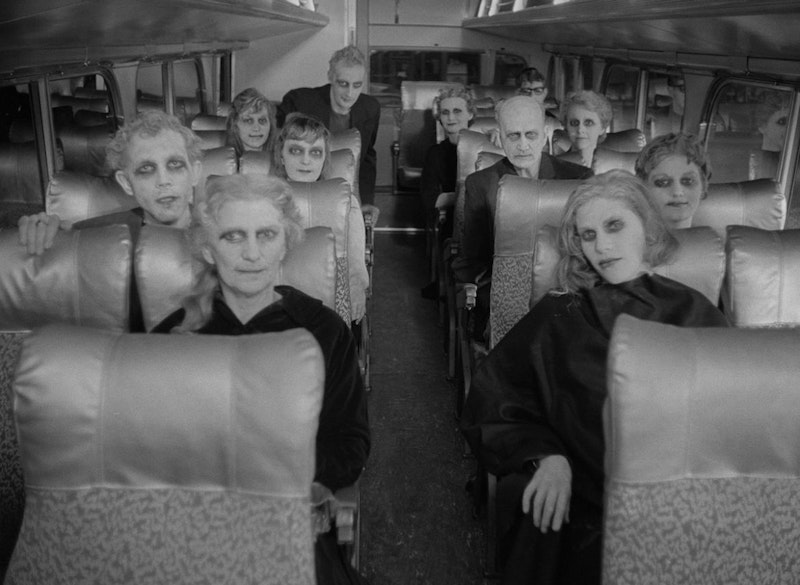 It’d be too easy to label Herk Harvey’s Carnival of Souls (1962) as merely a horror or a B movie. True, it was Harvey’s first and last feature film (as was the writer’s, John Clifford), and true, it was shot in three weeks on a budget of $30,000, and true, some of the production value is low, mostly in sound. The permissions to shoot the film were not always granted, which added another usual element of a low-budget horror flick. All of these aspects seemingly point to a movie that might be entertaining and might be good because it’s so bad. Despite all this, Carnival of Souls refuses to submit to an overly simplified category.

The film begins with a drag race between two cars, one occupied by three young women, the other by men. An accident occurs, and it appears that all of the women in the car are dead. But then, like a creature from the muddy, presumably black, lagoon, a young woman emerges out of the water. She’s slightly disoriented, which is to be understood given the accident. Her name is Mary Henry (played by Candance Hilligoss, the only classically trained actor in the cast), and as the film unfolds, we learn that she has decided to leave Kansas after the accident. Mary has accepted a job as a church organist in Salt Lake City.

There’s nothing unusual about any of this, despite the fact that Mary’s a bit cold and distant to others, who in turn are trying to show some warmth toward her. She doesn’t see anything spiritual or religious about being a church organist. It’s merely a job, but in a place like Salt Lake City, that in itself would be a sacrilege to utter. Her spiritual isolation from others is taking a strong hold over her, and the coldness that she exhibited at the beginning of the film intensifies.

She’s taken by an abandoned amusement park—a site of a real carnival park on the shores of Great Salt Lake, which was ruined several times in separate fires. The ghosts seem to be calling to her, and everywhere she goes, Mary is followed by a man that looks like a zombie, mildly amused (played by Harvey himself). He’s both a dark menace and a friend that she can’t ignore.

As the film progresses, we witness a change in Mary’s demeanor. So far, her relation to the external world has been awkward and slightly foreboding. She’s capable of small chit-chat (with the landlady of the boarding house) and she’s successfully rejecting the advances of her creepy neighbor, John Linden (Sidney Berger), who doesn’t understand the meaning of rejection. In many instances, one wonders whether he might rape Mary, but he turns out to be more of an annoying Peeping Tom than a real threat.

Things begin to change for Mary and the audience when she visits a clothing store. She asks for assistance but is ignored. This gives the audience a clue where Harvey and Clifford might take us and what this lack of existence may mean for Mary. The only time a spell is broken is when she hears a bird singing, which mysteriously brings her back into the world.

Harvey and Clifford were working for Centron Corporation, a company that produced industrial and educational films, so they were familiar with some aspect of filmmaking. The script may not be the most stellar or tight, nor is some of its sound editing (although the sounds of the organ are mesmerizing). Any low-budget movie will have gaps, yet despite the low level of production, Carnival of Souls doesn’t suffer from it. There’s something unique about this truly independent film.

Harvey has created an atmosphere that’s reminiscent of Ingmar Bergman’s focus on existential dread. Candance Hilligoss captures Mary’s detachment and anxiety we often see in Bergman’s characters. Although we don’t necessarily have any empathy for Mary, the dread and uneasiness create an existential dichotomy or some kind of fragmentation of the self that any human can relate to. Mary feels that the world she’s surrounded by is not recognizing her metaphysical and physical constitution. The only time a sign of life emerges is through the abandoned and dilapidated carnival. She’s continuously seeking the authentic self, but it’s not found in relation to other people. They find Mary somehow inhuman and naturally, step away.

This was a conscious decision on the part of the filmmakers. As John Clifford said, “I decided early on to give the heroine no real sympathy or understanding from any other character. For the viewer, there is no relief from her dilemma, no catharsis except what viewers create for themselves. I believe that is one reason the film tends to linger in the mind.” Clifford is right—the film lingers in one’s mind, but that might not be the only reason. It’s a strange blend of high and low art. It clearly made an impact on George Romero and his Night of the Living Dead (1968), and there are traces of it throughout David Lynch’s work as well.

Whatever their initial intentions may have been, Harvey and Clifford made a successful and seamless collage of American and European cinema. Both aesthetic expressions are equally present, as is the notion of hell, purgatory, and religion itself. In many instances, the film’s atmosphere and the freakishness of characters is suggestive of many short stories by Flannery O’Connor. There’s a constant sense of alienation and a threat of being swallowed by the inhabitants of the carnival but the reason is never really clear. The ambiguity of darkness and evil is more natural than supernatural, and this is one of the reasons that Carnival of Souls endures. In some comical and grotesque way, it sparks a question or fear of our very own, private alienation, and amusements and signposts we see along the way.