The Marksman Is No Cold Pursuit

Even in a pandemic, nothing can stop the annual Liam Neeson January Movie. C+ 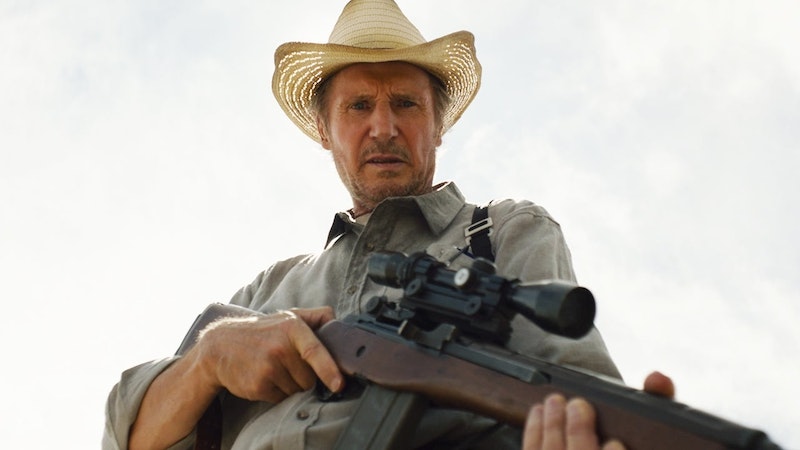 This new year, Liam Neeson offers us The Marksman, which has him as a Marine-turned-rancher protecting a young boy from murderous representatives of a Mexican drug cartel, both on the border and later on a journey up Route 66. The Marksman is a dour, ponderous film, missing a lot that normally make this particular subgenre enjoyable.

The Marksman represents a combination of movie archetypes we're used to by now. In addition to the typical Neeson revenge thriller, there's a touch of the story of a cranky old loner who befriends a kid. It's a road movie, and also the tale of an unlikely white American going toe-to-toe with a drug cartel, and getting the best of them. Neeson, in this film, is aping multiple eras of Clint Eastwood's career, including various westerns, plus A Perfect World and Gran Torino.

That's probably not an accident, as the director of The Marksman, Robert Lorenz, is a longtime Eastwood associate, who produced most of Clint's projects between 2002 and 2014, and also directed Eastwood in the dreadful Trouble With the Curve, which played like a reactionary response to Moneyball. The Marksman isn't nearly so reactionary, but it's forgettable.

Neeson plays Jim Hanson, an ex-Marine and Vietnam vet, widowed, who lives alone on a ranch near the border in Arizona. He soon happens upon a young mother and her son Miguel (Jacob Perez.) When the mother is killed in a shootout with the cartel guys and the boy faces deportation, Neeson takes him on the road to Chicago, to live with some relatives. Most of the movie has Jim and Miguel on the road, while getting into the occasional skirmish with the cartel villains. That the car taken on this long journey is a junky old truck that constantly threatens to break down provides more tension than the gun battles.

Perhaps because Neeson’s 68, and he looks noticeably older than when he started doing this, there's less hand-to-hand fighting than usual, with shootouts providing most of the action. And I’ve no idea what's going on with the actor's accent—he's doing the full Irish Neeson, while sprinkling in the occasionally "y'all."

The movie doesn't get especially political, except for when Neeson says, of the border, that "the government needs to get that figured out." In another scene, "The Wall" is glimpsed, but it’s breached easily.

What's also disappointing is that the cartel baddies, led by Maurico (Juan Pablo Raba), are boring, who barely speak and are given zero depth. Perhaps we're spoiled by the Breaking Bad/Better Call Saul universe, which keeps establishing drug lords who are multi-faceted and fascinating characters.

Part of what's enjoyable about the better entries in the Neeson badass genre is how absurd they are. Serious as the subject matter can get, it's entertaining to see this old guy kick the asses of terrorists and human traffickers. But in The Marksman, there's no joy or levity.