Donny’s Bar Mitzvah is rude and relentless, a comedy like Freddy Got Fingered with an airtight script. 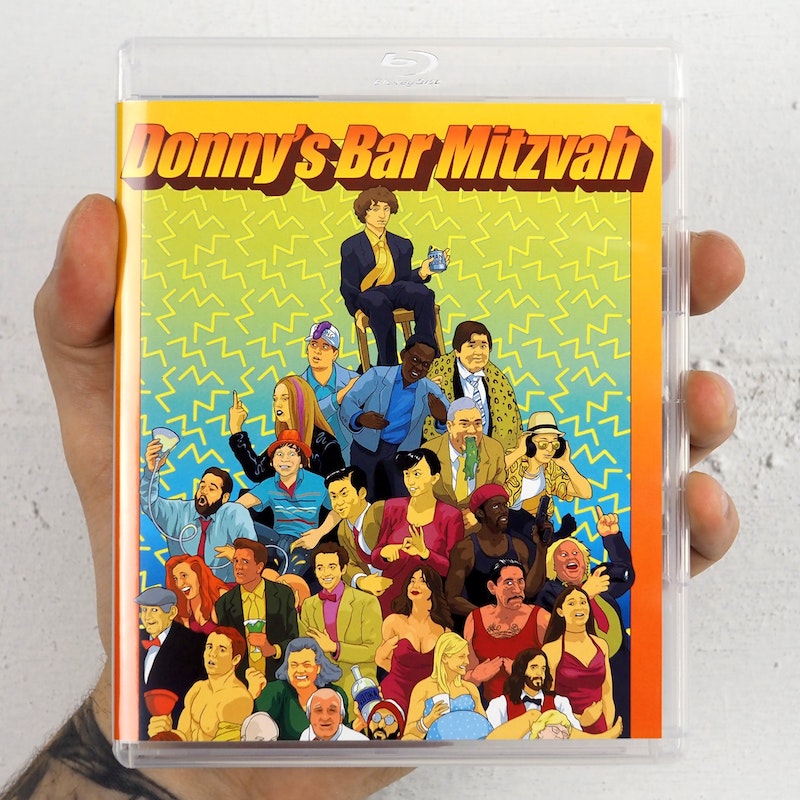 For all the articles and asides written about the death of the studio comedy, there’s comparatively little on the comedies made today and how they’ve changed beyond becoming more open-minded and politically correct. More lessons than ever are learned in comedies, and like all trends in film, this will pass. The mean-spirited comedies of the 1980s and 1990s come again, in a different form, and Jonathan Kaufman is pointing the way with his new film Donny’s Bar Mitzvah. It’s a blistering 79 minutes of high-pitch absurdism, slapstick, and a jet-black sense of humor, far beyond anything on Adult Swim. Donny’s Bar Mitzvah (released by Circle Collective, a partner with Vinegar Syndrome) is presented as a “found tape” within the film, with a brief scene at the beginning featuring a couple arguing over what to watch (next on the shelf is “Barney Porn”). They bicker and then the movie begins, all of it put through a VHS filter. This is where the Adult Swim comparisons end.

Donny’s Bar Mitzvah is notable because it’s insane and dense beyond belief, a joke-writer’s dream. Not everything in this movie lands—far from it—but it’s relentless. Kaufman jumps from person to person at this bar mitzvah, and they’re all degenerates, cliches that are given new life by daring jokes that “no one could get away with today.” There’s a slightly creepy older valet played by Connor Del Rio that tries to encourage some kids after their dance teacher (Jeremy Tardy) gets frustrated and leaves. The Valet goes around the room: “You shit your pants in math class! Show us how you walked out. SHOW US HOW YOU WALKED OUT.” He waddles, and it does resemble something that could be considered dancing. He revs up another kid, and then he tells the next one, “HEY! You’re father’s abusive, right?” “YEAH!” “AWESOME! Show me how you fight him off!!!” He does. Cut to a table of parents, half of whom are either wearing soiled diapers or throwing up.

Even the heart-to-heart moment here is played with genuine sentiment without ever interrupting the pace or the violently dark tone of this movie. Over a joint, the Valet tells Donny (Steele Stebbins) that the party’s not for him, it’s just an excuse for his parents and their friends “to throw a lot of cash around without looking ridiculous. This is the party they want for themselves.” Kaufman has his bar mitzvah kids getting fucked by parents in the bathroom (with plungers), consensual gay sex between a nearly openly gay teenager and his friend’s dad, so dumb he doesn’t even realize he’s gay unless he’s getting his butt eaten out. Earlier on, the same dad (Regan Burns) gets hit on by a woman with a British accent who rolls a cigarette into a giant tobacco cock in one go.

Kaufman loses me whenever he uses poop or puke, and most of the time the dick jokes are boring. Donny’s Bar Mitzvah should be praised by how few cliched jokes it actually has, considering how much material is in this barely-feature film: the kid that fucks the mom and gets pegged with a plunger gets her pregnant instantly, but instead of a monster like Snatchers, she gives birth to a healthy baby boy that same night—and that baby is black, unlike the father (although he’s dressed exactly like the dance teacher who sees what’s going on in the background and silently inches away, horrified). A joke we’ve seen over and over for three or four decades. At one point, there’s a shipment of party hats that were supposed to be adorned with a metal emblem, but instead come affixed with floppy purple dildos. Yawn.

But that’s it, and the rest of Donny’s Bar Mitzvah is refreshingly crazy, a comedy closer to Freddy Got Fingered or Fassbinder’s Satan’s Brew than anything that’s made money in cinemas recently. I don’t like how filthy comedies and romances have gotten—far from a prude, I think reveling in saying every dirty word and detailing every wild sex act in the mouths of wine moms or teenagers only goes so far. Because there’s nowhere left to go, and then I remember that the main characters in American Pie and Dude, Where’s My Car? are all virgins. Adult men, not in monasteries, some with girlfriends (in Dude, Where’s My Car?, Ashton Kutcher and Seann William Scott have been going out with “the twins” for a year, and they still “haven’t given [them] sex yet.” And of course Jason Biggs fucked a pie to see what pussy felt like. Today, he’d look on the Internet for something else.

The studio comedies of the 1980s and 1990s may feel “daring” today for being politically incorrect, but they’re films populated by Ken dolls, characters that are as chaste and inexperienced as 13-year-old boys. Now, the 13-year-old boys are bragging about who “fingerblasted” who and who has the biggest dick and who fucked whose mom—it works in Kaufman’s movie, and it’s certainly more true to life than the sheepish innocents of pre-Millennial studio comedies, but it only gets you so far, and not very.

My favorite joke in the movie is a toss-off, like most of them: the gay kid is dancing with some girl. She says, “So I heard your parents are getting divorced.” “Yeah, I finally convinced them.” It’s not just the news, this movie has the comic spirit of Mitch Hedberg and Norm Macdonald, but with a decent amount of Farrelly Brothers and the kind of tight writing you rarely see in new movies, especially comedies. Really only about 60 percent of the jokes really work, but the film’s guttural presentation and delivery are intoxicating. No lessons are learned, and this is good, this is how it should be in comedy: kamikaze, blasting in every direction.