Being Flynn Is Pure, Fine-Grain Fluff 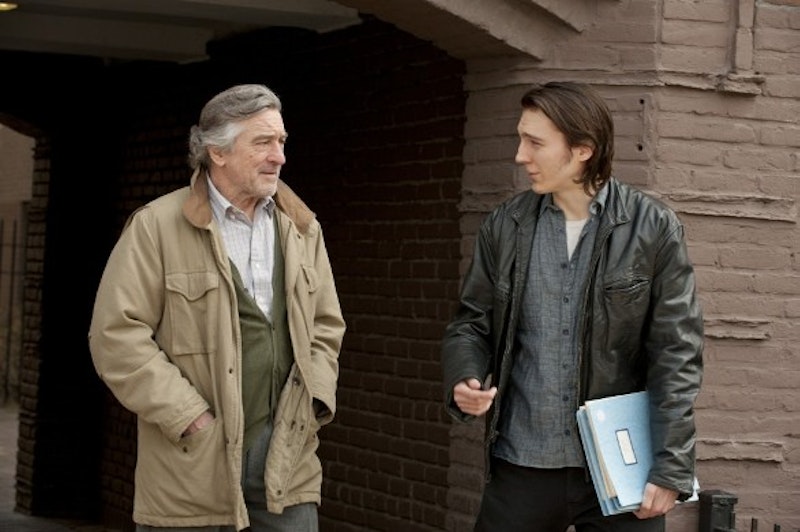 Finally, a movie where Robert DeNiro can phone it in and not make the whole thing look like a MasterCard commercial. DeNiro’s work is complete—anything else he does is just a means for making his senescence plusher. If you can walk onto any set, read lines, like you’re bored and get millions to do it, why not? Whether you think it’s arrogance or leisure after a life’s work, DeNiro’s carefree attitude is a perfect fit for Paul Weitz’ new film Being Flynn. DeNiro stars as a homeless alcoholic with delusions of grandeur, the kind of guy who talks incessantly about how brilliant he is, how his novel is a classic, how his son Nick (Paul Dano) will never be a writer worth anything. No surprise his book is awful, but even so, Nick gives a lot of weight to what his long-estranged father thinks of him and his work. Cue title card: “A Father… A Son … Bonded for Life.”

Being Flynn has a lot of the clichéd trappings and aesthetics of bad Lifetime movies (check out the poster, and the tagline: “We’re all works in progress.”), but the material and the acting are really strong. Dano is a fascinating actor to watch. He’s boyish and sounds like a wimp, but he’s got this dark intensity that rockets up into shrill screams and outbursts every once in a while. He reminds me of a young John Cusack, but a lot more emotionally messy and brooding. Dano is the best part of Being Flynn. Discovering his mom’s suicide note, her body, all because she gathered from an entry in his journal that he thought she was a lousy mom; I can’t think of anyone else who could better communicate that impossible trauma and the miserable years after with just eyes, a look. It’s all the more devastating because his mom (Julianne Moore) is wonderful, overworked, but hardly a poor parent. Nick Flynn never clarifies that horrible misunderstanding, can you imagine that?

Dano’s anguish is palpable but it’s bottled up, his rage rarely shows. He just stews in it, constantly. You can hear it in his voice, his movements. When he hits a crack pipe in a stairwell full of junkies and bums, you can’t fault him. With a violently narcissistic and delusional father, guilt over his mother’s suicide, and the colossal doubts of significance every writer has, Nick is a well-meaning misanthrope. It’s hard to tell whether he works at a homeless shelter out of pure altruism, or just to “gather material” as his father says. Jonathan Flynn isn’t interested in anyone but himself, and Nick struggles with avoiding the mistakes of his father and looking beyond his own misery.

Being Flynn is a milquetoast take on a fascinating and powerful story. Check out Nick Flynn’s 2004 memoir Another Bullshit Night in Suck City (isn’t that the best fucking title? Bolder filmmakers would’ve stuck with that one for the unvarnished truth. Paul Weitz should stick to fluffier stuff.