Year of Nothing Doing 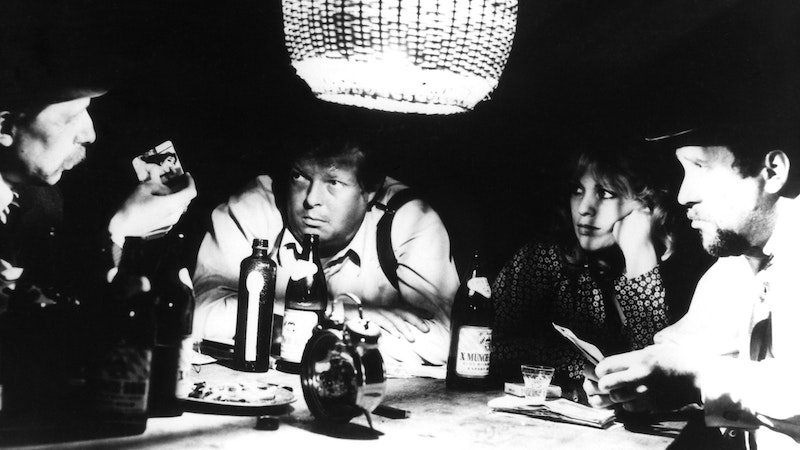 Looking at the shelves of new releases at Beyond Video in Baltimore, 2020 looks like a victory lap for 2019: Parasite, The Irishman, Once Upon a Time in Hollywood, Joker, Knives Out, Cats, Marriage Story, Uncut Gems, Little Women, Portrait of a Lady on Fire, and Long Day’s Journey Into Night still stand out among titles that are technically more recent—The Hunt, First Cow, Never Rarely Sometimes Always, The King of Staten Island—but never saw theatrical release.

Look at the Oscar shortlist for a dozen films mostly no one’s heard of, much less seen, because there was no year in movies, nothing happened. Bong Joon-ho making his multiple Oscars kiss at the February 2020 ceremony—along with the worldwide success of Parasite—was more of an apex than even the most histrionic critics called it at the time. Pop culture froze soon after, and even though hundreds of films were released last year, nobody talked about them—and if they did, it didn’t last.

Borat Subsequent Moviefilm, The Social Dilemma, Mank, and The Trial of the Chicago 7 are the only films that entered popular consciousness this year. How often do you see images from these films compared to Joker or Marriage Story or Once Upon a Time in Hollywood? The memes speak for themselves. Smaller films, like Spree, Spaceship Earth, and I Used to Go Here probably benefited from the pandemic: with so little product coming from Hollywood, independents and festival favorites suddenly had overseas theatrical engagements and priority attention online.

Spree in particular has benefitted from a slow rollout since its initial release last July, leaving each service with word-of-mouth and streaks of a serious cult classic. Had it played the festival circuit, a handful of theaters in major markets, and hit disc along with hundreds of much bigger movies, Spree would’ve been seen by far fewer people.

Other countries had something like a cinema, eventually—Venice was able to go on in mitigated form, and production has resumed for people and companies with enough money to get hundreds of rapid tests and, soon enough, vaccines for everyone on set. The semi-disastrous release of Wonder Woman 1984 on HBO Max on Christmas Day—was it a failure? Didn’t it show how many people actually have HBO Max?—one hopes scared studios away from releasing major films straight to streaming, but there’s only so much product left.

Most of the product that’s been dumped on “virtual cinemas” are small films, movies that would’ve played a handful of festivals this year, but now, perversely, have more availability and reach than something like Sofia Coppola’s On the Rocks or Steven Soderbergh’s Let Them All Talk, both playing behind separate paywalls. You don’t see memes from these films going around because they’re available to everyone. I’d pay standard streaming fair for Soderbergh’s latest, but I’m not signing up for another goddamn service, and I know I’m not alone in that.

Whatever it takes to survive in the long run, fine (Soderbergh’s comments on the pandemic and its implications on the future of movie theaters are sober and reassuring). But for now, the cinema is vanishing from pop discourse. No matter over individual movies, but what about when there’s no turnover? We can only live on Joker memes and Scorsese quotes for so long. There are lots of 2020 movies I can’t wait to see that never would’ve seen theatrical release here in Baltimore until about now anyway: Tsai Ming-Liang’s Days, Hong Sang-soo’s The Woman Who Ran, Abel Ferrara’s Sportin’ Life, and Julia von Heinz’s And Tomorrow the Entire World.

Germany submitted Heinz’s film for the Best Foreign Language Oscar, but like Chloé Zhao’s Nomadland, winner of Venice’s Golden Lion, it’ll go into the Academy Awards hobbled by breaking news and obscured by a century’s worth of back catalogue. And that’s what I spent almost all of 2020 doing: watching movies because I couldn’t make them. This year will be different, but not “normal”—I don’t know the next time I can shoot with a regular-sized crew on a “micro-budget” basis. No matter: filmmakers can always write, edit, and shoot experiments at home. Musicians and comedians can’t be expected to stay sane for much longer.

Moreover, Baltimore hasn’t had a decent repertory movie theater in the 18 years I’ve lived here. The Charles, The Senator, and The Parkway all played revivals here and there, along with some scraps from the Cinemark and CinéBistro chains, but when they all closed last March, Baltimore’s film culture didn’t lose much. Don’t get me wrong: I miss going to Monday night revivals at The Charles. But that was once a week, programmed by one person—very well, but just one man. Without theaters, I captured more film history than I ever could’ve in a normal release year.

Crisis gave me good side effects: proximity to Beyond Video and my immediate family, who love movies as much as I do and are the only people I see on a regular basis for the time being, have not kept me away from the cinema. Far from it: as we take turns picking movies, my parents have tended toward movies released around their courtship and early marriage, roughly from the late-1980s to the mid-1990s. Plenty falls out of this range, but it’s been instructive watching movies they probably saw together on a date or on VHS once and never again since.

Previous year’s piffle is almost more interesting or “watchable” than fresh trash. I didn’t dislike Bacurau, but I was let down by a movie that’s gained some momentum and checks every indie cliche of the last few years: class warfare, psychedelic drugs, extremely realistic violence and gore, “crazy” genre-bending that’s much more mannered and neat than advertised, and the staid earnestness of a “statement.” Save the drugs (unless you consider an allergic reaction to peach fuzz “heady”), all of those apply to Parasite, but that was a great movie, one that didn’t disdain or misunderstand entertainment. Bong, a voracious student of cinema, is someone with a political agenda who knows how to incorporate it into his work without creating tracts or bloated “statements.”

The last thing I wanted to watch in 2020 was a “statement.” I didn’t want to hear from anyone about the present, or “these uncertain,” “these unprecedented times”—because when I did snap out of my brief pandemic panic fugue, in the last week of March, I found comfort and energy in films. Anyone with a passing knowledge of film history has a passing knowledge of the 20th century (and mangled and, in some cases, beautifully distorted visions of previous centuries), and knowing what people lived through in “the American century” makes the current situation feel like a picnic. Alone, sure, but what can we do?

The cinema in 2020, the thing that filled its void in our dream worlds, was a jagged clump of junk collected from the sinks and sewers of pop culture, social media, and current events. Donald Trump remained immune to parody, and the spectacle he created topped most everything else on offer. With a new administration only nine days away, brace yourself for “a return to pop culture” that shows how little it has to offer in comparison to our insane reality. The next several years could be like Ireland’s Troubles, or the Years of Lead in Italy, with incidents like last week’s violent protest at the Capitol repeated ad nauseam across the country—some real, some “fake.”

People will die either way, but that’s not important to the story: all that matters is what brand of “terrorists” are responsible. Domestic, of course—we’ve dispatched with the “War on Terror,” according to one of its architects—but what kind of domestic terrorist? White supremacist? Neo-Nazi? QAnon? 5G “skeptic”? The cinema must confront, influence, and eventually transcend this reality.