If Not Now, When? is an earnest if uneven drama about enduring female friendship. B- 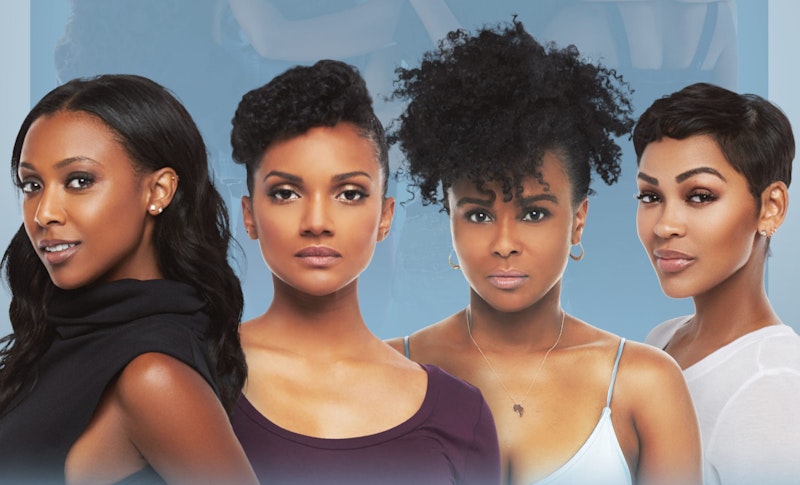 The new movie If Not Now, When? begins with a flashback, to a group of four young teenaged girls, performing a choreographed sexy dance in a school gymnasium, which led me to believe another Cuties controversy was coming up. Instead, the scene devolves into something shocking, before the film jumps ahead 15 years to the same four characters as adults. If Not Now, When? ends up as an earnest drama about enduring female friendship. It's well-acted, although the screenplay is uneven.

If Not Now, When? seems to take its title from a famous Rabbi Hillel saying from the Jewish ethical tract Pirkei Avot, possibly the Primo Levi novel of the same name, or the Tracy Chapman song that quotes those lyrics; there’s also a leftist Jewish group called IfNotNow.

The film is the directorial debut of Tamara Bass and Meagan Good, both of whom are actresses who appear on screen, while Bass wrote the script. Good plays a woman battling addiction who is shooed into rehab by her friends (Bass, Meagan Holder and Mekia Cox.) Meanwhile, Good's character has a young daughter (Lexi Underwood), the result of the pregnancy hinted at earlier.

If Not Now, When? goes through each of the characters' personal stories—Good's character is strapped by opioid addiction while trying to connect with her daughter, and Cox is in a volatile marriage with a cheating, down-and-out NFL player (Jon Chaffin). Holder's character is caring for a young son, while Bass' is trying to date a doctor, while struggling with her inability to have children.

The look of If Not Now, When?, which was shot by Craig Dean Devin, is attractive, making fine use of natural light in mostly indoor Los Angeles locations. The film features decent performances from a strong group of actors, led by Underwood, who was one of the better parts of last year's Hulu show Little Fires Everywhere, and Good, who has made a strong impression in everything from Brick to Think Like a Man to Anchorman 2.

If Not Now, When? juggles more plot than it can handle, and its nearly two-hour running time is elongated. But the spirit of friendship shines through, leading up to an ending that is satisfying, with some neat symmetry. The film represents a welcome throwback to movies like Waiting to Exhale, How Stella Got Her Groove Back, and other ensemble dramas with all-Black casts that were popular for a too-brief time in the late-1990s and early-2000s.