Journey to the End of Ennui

The French Dispatch is by far Wes Anderson’s best film yet. 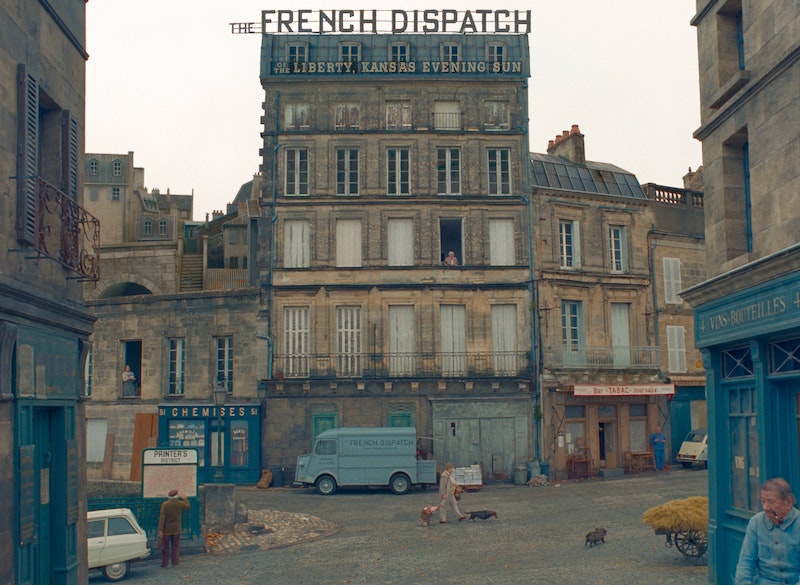 Although Wes Anderson and Searchlight Pictures made the right move and delayed The French Dispatch for over a year, it might’ve made more sense last summer when it was originally supposed to open in the United States. Suppose Anderson put his foot down like Christopher Nolan—if he even had that power—and insisted that his movie debut that year, in theaters, pandemic be damned. Nolan’s Tenet did open in September 2020 in hundreds of theaters across the country, and I saw it, but it failed spectacularly and far fewer people saw it then than would’ve a year later, alongside Old or Dune or any of the other big movies we’ve returned to theaters for.

But it felt great seeing a movie that big, loud, expensive, and stupid in a massive theater at the end of the summer of 2020. It was a real jolt even if it made no sense. I’m glad The French Dispatch wasn’t torpedoed by a shortsighted director, but it still would’ve had more resonance last year, when everything was distant and dying. The virus isn’t gone, but pre-vaccine, the apocalypse felt that much closer. The French Dispatch is a movie about time’s merciless march forward and a steely-eyed stand against death in the form of art and archiving. The titular magazine is actually just a supplement for a local paper in Kansas, but editor Arthur Howitzer Jr. (Bill Murray) is a saint of journalism, already dead when the movie begins. Narrator Anjelica Huston notes that along with him, so goes the publication. As if the movie itself is a tribute to Howitzer Jr.’s magazine, it consists of three stories, a couple of vignettes, and a dash of frame narrative featuring flashbacks with Howitzer Jr.

The French Dispatch is both Anderson’s most astringent and technically flamboyant film yet. It’s also easily his best, a formal fantasia that feels like reading an issue of The New Yorker, the paper’s obvious inspiration (and stated clearly with the dozens of dedications at the end). Anderson’s work so far can be split down the middle: pre- and post-Fantastic Mr. Fox in 2009. The four films since have become even more manicured and precise, and in the 2010s Anderson went from being America’s most imitated filmmaker to possibly the most unique (though never the best and rarely great). Unlike The Grand Budapest Hotel or Moonrise Kingdom, Anderson’s latest film has no central character or story to latch onto, and its austere presentation and structure is echoed in Howitzer Jr., and the magazine’s, motto: “No crying.”

Like Tenet, the star of the movie is the movie. The French Dispatch is head-spinning and truly lysergic: Anderson has moved past simple “live action animation” into something otherworldly. I can only compare this film’s combination of precision, reservation, and aesthetic extravagance with the last films of Yasujiro Ozu, particularly The End of Summer. Anderson isn’t dealing with new territory or characters here, but like Ozu, he’s developing their environment at such a rate to make them look unreal, or hyperreal. Unlike the spectacle of The Grand Budapest Hotel, all of The French Dispatch’s achievements and intricate set pieces are either nested within a story-within-a-story, or come so quick that they only stick as a fleeting image. Those are the images that stick with you after walking out a movie.

I can think of three that blow my head off: Zeffirelli (Timothée Chalamet) and Juliette (Lyna Khoudri) riding a motorcycle on their way to make love after abandoning the revolution; Saoirse Ronan’s showgirl looking into the prison cell slit to check in on a kidnapped kid—the segment suddenly goes from black and white to color, the letterbox of her face and eyes bursting with color; and prisoners bursting through concrete into an ad-hoc art gallery with frescos on the walls by Moses Rosenthaler (Benicio Del Toro) funded by Julien Cadazio (Adrien Brody). Framed as three stories of a magazine supplement that went out of print over half a century ago, Anderson’s typical naïveté and cluelessness is entirely appropriate, unlike that stupid dog movie with the sushi.

It makes sense that The French Dispatch’s interpretation of the May 1968 uprising is the same pat liberal putdown of both leftists and fascists, because that’s precisely what The New Yorker would’ve published then and now. Anderson usually comes off like The Man with the Yellow Hat from Curious George: a benevolent colonizer who doesn’t have the self-awareness to see his own racism and xenophobia in the “affectionate” way he treats his subjects (an important word, “subjects”). I don’t disagree that filmmakers have a responsibility to be political and/or make political work, whether overt like Godard or Fuller or under the radar like Sirk or Ray. But Anderson is as far away from a political consciousness as we are from a readable issue of The New Yorker.

This movie isn’t a fawning tribute or a gooey-eyed parade through gay Paris—it’s a really strange and off-putting art film made to feel like you’re reading a highbrow literary magazine. No wonder it died in the crowded matinee I saw at The Charles Theater in Baltimore, where I’ve seen almost all of Anderson’s movies on first release since The Life Aquatic with Steve Zissou in 2004. Unlike so many others that were met with bursts of hysterical laughter and rapt fans that had clearly been waiting weeks or months, watching this one felt like sitting in a doctor’s waiting room. I loved it.

Once again, the popular word on Anderson obscures the work of an artist able to hone his craft at a relatively high level for an independent auteur. Whether or not Anderson has the “right politics” or is able to make a “regular movie” are questions that melt away once you sit down and watch what he’s made, because this is a movie that could only have been made by one man after decades of experience, and as it slams by, all you can do is sit slack-jawed. He has become a magician.