No Reprieve for Emma Küsters

The sad and familiar selfishness of Mother Küsters Goes to Heaven (1975), one of Rainer Werner Fassbinder’s greatest achievements. 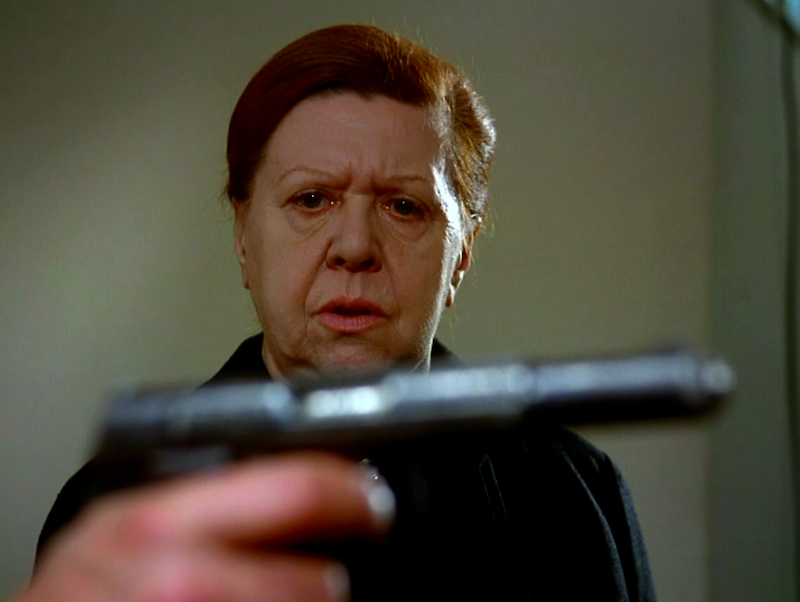 Mother Küsters Goes to Heaven is rarely rated or even mentioned as one of Rainer Werner Fassbinder’s greatest works. Without a decent home video release (Wellspring’s 2003 DVD is out of print and runs at the wrong frame rate), for now it lives on the Criterion Channel in a restoration one hopes will make it to disc so those without blazing fast Internet can finally see it properly. A Fassbinder box set is necessary: none of them have “dated,” whatever that means at the moment; on the contrary, Mother Küsters is so striking because it could be remade today in America with zero revisions, despite its specific political context in mid-1970s Germany.

To be clear, what happens to Brigitte Mira’s Emma Küsters is a story as old as the printing press: at home one evening with her grown son and his bitch wife Héléne (Irm Hermann), while waiting for her husband Hermann, Mother Küsters and her family hear a radio bulletin about a worker in a chemical plant that “suddenly went insane” and killed the son of the manager before killing himself. Mother Küsters asks “is a tire plant a chemical plant?” Héléne snaps, “Everything’s chemicals nowadays,” oblivious to the horror that hits us as soon as Mrs. Küsters mentions the tire factory. But they all go about their business: Mother Küsters increasingly anxious, her son unworried, her daughter-in-law uninterested.

Then a knock at the door: Emma and her son get up to receive the news we all know is coming. “I don’t have much time,” Hermann’s co-worker says, laying the groundwork for all of the people in this movie right before breaking the news that Hermann did, in fact, “go insane” and kill himself and his manager. Frau Küsters and her son Ernst (Armin Meier, in his most significant role besides Germany in Autumn) receive the news without emotion, even more like dolls than Fassbinder’s other films, where the staging and blocking almost always leans mannequin. Mother Küsters Goes to Heaven comes towards the end of his straightforward kitchen sink/Douglas Sirk period—only Fear of Fear, broadcast one day after Mother Küsters’ contentious theatrical premiere, and I Only Want You to Love Me, would follow before Fassbinder had to reflect and “find a new way to make films again,” as he had with Beware of a Holy Whore and, as he told Wolf Gremm in 1982, he intended to with Querelle.

We’ll never know what could’ve followed this third rebirth, but Fassbinder’s second aesthetic shift produced films a world away from Mother Küsters: the crystalline and impenetrable Chinese Roulette, and Satan’s Brew, the cinematic equivalent of scratch paper (or, less generously, a latrine). Still, one can see the coldness and cynicism of these films creeping into the tweaked social realism of Mother Küsters. Despite sporting a mis en scene close to that of Ali: Fear Eats the Soul, The Merchant of Four Seasons, and Eight Hours Don’t Make a Day, Mother Küsters is far more restrained: the camera moves, but there are no show-off shots, and as far as the art direction, there’s hardly anything that could be called baroque (Martha, for example, looks like Visconti in comparison).

The way Mother Küsters Goes to Heaven is made and presented mimics a newspaper report: functional, without emotion, and with plenty of detail, and no one that resembles a living human being. After the co-worker leaves, Emma calls her daughter, a singer going by Corinna Coren (Ingrid Caven)—on a pay phone—to break the news. The Küsters can’t even afford a telephone, but no one wants to help them, least of all the media that descend on their tiny apartment. Héléne is crying, Ernst smokes and says little, and the reporters move around the place like grasshoppers. One particularly oily writer, Niemeyer (Gottfried John), schmoozes Frau Küsters and gets her to spill, insisting his will be a sympathetic article.

Of course it isn’t, but Corinna doesn’t care—she even starts fucking the guy. Mother Küsters is beside herself, and fed up with the drama, Héléne insists on a vacation, and all Ernst can do is shrug. “It’s better for the baby,” he says, with next to no confidence. Then the communists swoop in: after first viewing their prey at Hermann’s funeral, two armchair radicals (played by Karl Heinz-Bohm and Margit Carstensen) lure Mother Küsters into a “friendship” before convincing her that Hermann was actually a closet militant, and that what he did at the tire plant was “direct action” borne out of sympathy to communism and leftist causes. “But Hermann wasn’t a communist! He always said those people caused a lot of problems…” Her denials are ignored, because she’s a useful pawn for yet another group of vultures.

They publish a nice article about Hermann in their version of The Daily Worker, but few read it and nothing happens. Mother Küsters is frustrated: these people talked so much about revolution and big changes, yet even with an enormous inheritance, they don’t appear interested in actually doing anything besides writing articles and giving speeches for 50 people. “These things take time, these things take time…” All Emma Küsters wants is a friend, someone to talk to, and Fassbinder shows again and again how impossible that is in Germany 1975. The overwhelming selfishness of that society, nearly 50 years in the past, is so familiar to ours. This is enormously depressing, because it means we’ve been stuck in molasses since then.

Armchair communists are more visible and vocal than they have been in years; the media is just as exploitative and craven; people don’t value their family members as much; and, without spoiling the last group of swindlers who hook Mother Küsters, there are still plenty of people who think that blowing things up and killing people is a solution to anything. Perhaps the only modern addition to the group of sharks and charlatans that exploit Emma Küsters would be the purely nihilistic mass shooter/domestic terrorist, some young man going out with the new “super suicide.” But then we’d lose that incredible dolly in on Mother Küsters’ face as she realizes how wrong everything has gone, standing in the editorial office right before the film freezes, and the ending is spelled out on screen in snippets—like a newspaper—over a dozen separate title cards. We don’t even get to see the end of Mother Küsters’ story: we have to believe what someone else is telling us.

I don’t like that this movie feels so contemporary. That means the poison is close, it’s here, it’s still with us, and it’s worse than 50 years ago. This is one of Fassbinder’s greatest achievements, and its stature and reach can only grow with a domestic disc release.