Your Life Is Unremarkable

That's OK. Julia Roberts is here to help with the film adaption of Eat Pray Love. 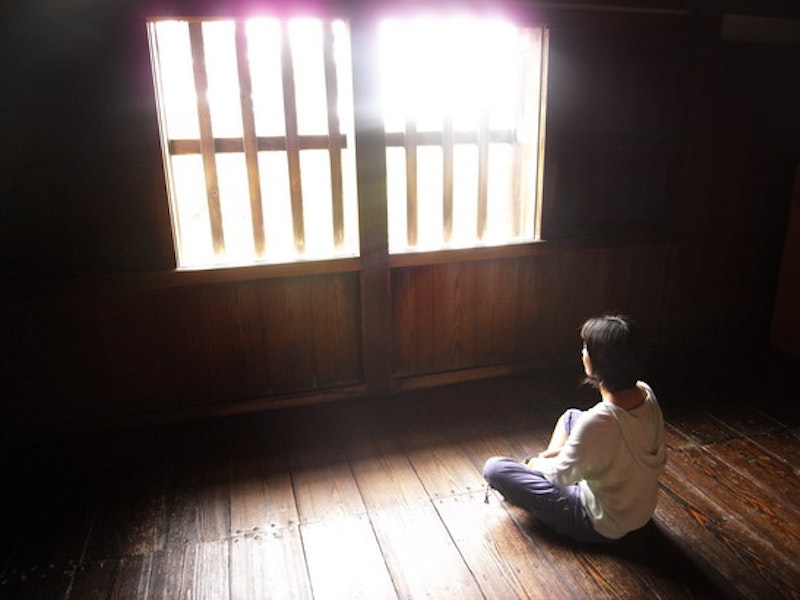 In my mind there's an island much like Australia where instead of sending our convicts, we might exile our overexposed celebrities. I’m always adding actors to the list of this island’s inhabitants, noting that moment where the much beloved actor transitions into the much reviled. On this island Robin Williams chops wood—breaking away from his ax now and then to launch into little voices and nonsensical impressions; Angelina Jolie and her brood farm the land nobly; and Julia Roberts, recently added, tends the hearth with her “charming” signature cackle.

Roberts has been irritating me for years now. The wide toothy smile, the down to earth beauty and the laugh all read like calculations, as a conscious imitation of what years ago brought her success. I am careful to avoid any movies she appears in, though today, with celebrities dominating the culture, it is impossible to avoid certain stars so that this past winter, I had to endure again and again noisome reprisals of Roberts’ insidious Pretty Woman laugh and increasingly malevolent Mystic Pizza down to earth-iness in countless television ads for the movie Valentine’s Day.

In my mind I sent her to the island officially after I saw her appear in a public service announcement for the Haiti Relief Effort. I’m all for charity and recognize the urgency of the cause, but Roberts’ plea was delivered in a tone so punishing it sounded less like a plea and more like a reprimand. After barely managing to put the scratch together to pay for a movie ticket, having one of the world’s richest and most powerful women dress me down for not being, in her eyes, generous enough did not make me want to give. On the contrary, it made me so angry that I had actively to remind myself that Haiti and the good Haitian people, despite this unfortunate affiliation with Julia Roberts, still deserve my help.

With this last movie of hers, I am irritated all over again. In Eat, Pray, Love, Roberts plays Elizabeth Gilbert, author of the book by the same name (which I haven’t read) and, more broadly, functions as a fictional ambassador to women’s selfhood. Such I’ve gleaned from the ads; I haven’t seen the movie, nor will I. I am concerned here, mainly, with the previews for this film targeting viewers like me.

She, Gilbert/Roberts is supposed to be me, us, you—the lady outside of Tasti-d-Lite eating your low-fat dessert on a weekday evening after work or the gym wondering what’s it all about anyway. Wondering if now that you’ve finished your low-fat snack you should “be bad” and get another one or just go home and write in your journal about how something is missing from your life. She is you, were you bold enough to attempt something drastic, unheard of, were you bold enough to realize yourself finally by going abroad and eating authentic gelato in one of Italy’s public squares.

The cliché of travel, of going away to find oneself, is hackneyed enough without adding to this idea, the notion that doing so would be a unique experience requiring great bravery on the part of she who would dare to do so. This “journey” is so well trod, it's practically a middle class rite of passage. Following college graduation, a certain socio-economic type takes the Grand Tour through Europe, and following divorce or the onset of middle age or the loss of a job the same certain type embarks on another monumental trip.

Countless memoirs before Elizabeth Gilbert’s concern this very same thing, and countless more will be written. Feature stories have appeared in women’s magazines attesting to the writer’s big risk in dropping everything in order to travel for a year. I have a variety of female acquaintances who are either currently traveling, about to start traveling, or returning from their travels, each of them quite thrilled with themselves. They love updating their Facebook profiles with pictures of themselves sun-kissed in exotic locales, sporting down-to-earth togs that must be draped and tied instead of buttoned or zipped. Sarongs abound.

Still, when you do it, though, it’s different. It’s a big risk—not a rite of passage at all—but a wholly new and fresh idea. When you do it, it will attest to your bravery and creative spirit because you stayed at a pension instead of the Hilton. Because you mixed with the natives, the men who pick up girls like you all the time. It’s a well-known fact that American girls searching for themselves are easy. When you sleep with a man in Italy or Bali after one night, it’s not because you’re a slut from New York, but because you’re open to what the universe is trying to tell you, because you’re on an adventure and your usual rules don’t apply.

Eat and Pray and Love for a year; that will fix everything that’s going wrong with your life, or at least give you some kick-ass stories to tell people when you get back and go out with your co-workers for happy hour drinks. You’ll be able to insert your travel story where your personality might go. Your life needs a quick fix and the Dalai Lama won’t be back to New York for a while. Book your ticket now.

When you get back, you can frame that photo of you petting the elephant beside the one of you meeting his holiness the Dalai Lama five years ago at Madison Square Garden—so spiritual!—and the one of you in Japan where you lived for a year following college to teach English (another one of your unique adventures!), and the one of you on the kibbutz where you decided to live for a year after graduation from your MFA program in creative writing, because you started to get that Eat Pray Love feeling again.

Living in Israel was great because as an American you were exotic, automatically interesting because you were foreign, temporarily hiding the fact that you’re boring. You didn’t tell anyone, but while you were there you wrote a memoir about soul-searching in Israel, which you planned to publish on your return. But upon returning, you realized the journal you kept was not actually very good—you’re not a very good writer because you spend all your time eating and praying and loving while abroad, and at home, soul-searching, i.e. drinking, sleeping around, and meeting up with your girlfriends at brunch to dissect the behavior of the men who are not calling you back, who inspire you to leave town again, to plan another big trip!—so you came back and took a job as a copy editor very similar to the one you had before you left, and resumed your life which was for a while a bit more interesting, because you had your travel stories and everyone at happy hour seemed so impressed. You showed them your tattoo. It said Eat Pray Love in Sanskrit.

And then more time passed and the effects of the last soul-searching vacation wore off, and you found yourself on your couch at “Me ’o’ clock” eating your “sinful” single-serving diet delight and reading Eat Pray Love during the commercial breaks of Grey’s Anatomy and you said to yourself something crazy: “I should go abroad and eat my single-serving desert in a picturesque public square, a piazza!” And so you embarked on a whole year of “me 'o' clock,” “because you deserve it”—this isn’t selfish, this is soulful—yielding another set of photographs you would frame when you got back, with one quite similar to that one of Julia Roberts used for the billboard for Eat Pray Love, in which Julia, about to break into one of her charming cackles, sits alone in a public square eating full-fat gelato on a bench, thrilled with life’s possibilities and her own bravery at having made the very unique decision to go abroad and find herself, again.

Multiple depictions of carbohydrates coupled with jokes about eating carbohydrates: “This is my no-carb left behind experiment.”

“I’m in love. I’m having a relationship with my pizza.”

Eat Pray Love: One Woman’s Search for Everything to distract herself from the gaping hole at the center of her life and person, that great empty void which she will futilely attempt to fill with single-serving desserts, foreign men, yoga and sunsets. Watchers of this film and readers of this book, delay your purchase of cats and reserve your ticket to Italy now—Bali then, or India, wherever, just as long as you go somewhere, anywhere other than where you are presently, and just as long as it’s after you attend the opening of Eat Pray Love in theaters this Friday.

(And by the way, I’m writing this from the JFK airport as I wait for my flight to Greece to be announced. Dispatch to follow.)