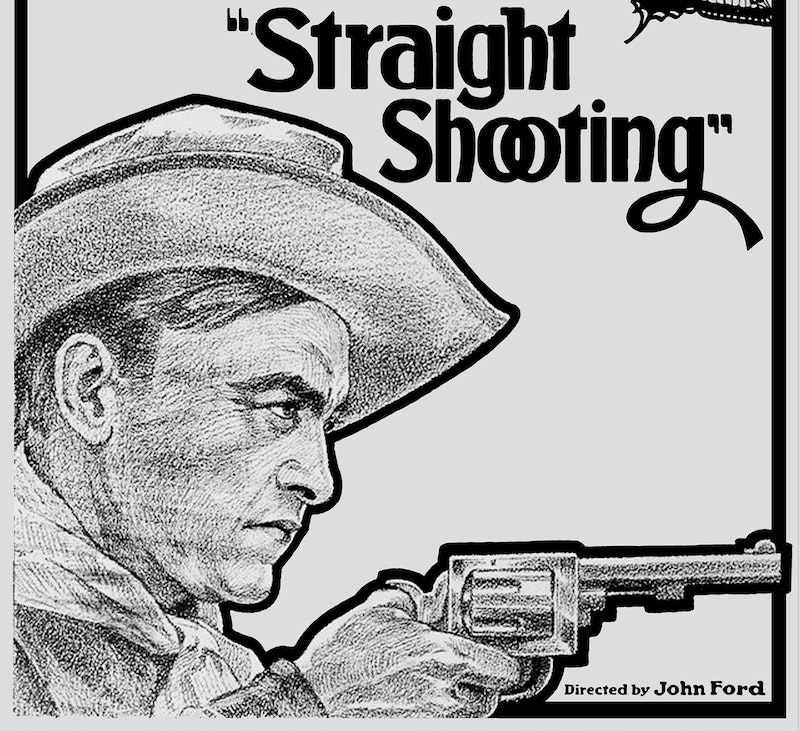 Kino Lorber has released a 4K restoration of John Ford’s first feature film, Straight Shooting, on Blu-Ray. Unlike like last year’s Hitchcock discs (Murder! and Blackmail), the film is presented in the correct aspect ratio. It’s amazing that Kino Lorber would spend so much money on 4K restorations and licenses from various studios, museums, and private collections with prints, only to stretch the transfers and denude an already devalued commodity to trash in the eyes of the only people left buying movies on disc. This isn’t a picayune complaint: if you’re buying Ford’s first feature, a silent film from 1917, you’re probably more discriminate about the presentation of the movies you buy.

Straight Shooting is great. At 24, Ford already had the foundation of all the work that would follow: a great eye for landscapes and wide shots, a preference for mood over plot, deep ambivalence about almost everything except God, an unmatched sense of rhythm and composition in his images, and humorous asides that always stick out—think of the hysterical mother pulling her 10-year-old son out of a Confederate battle march so she can take him home and spank him in The Horse Soldiers, shot 42 years later. Here, we see a good natured outlaw pilfering a jar of jam. Ford has fun.

Harry Carey stars as Cheyenne Harry, Ford's first noble outlaw (though the character precedes the film). He encounters a family of farmers—Molly Malone as the doe-eyed daughter, despite being nearly 30 at the time—and helps defend their land against avaricious ranchers. Watching Ford is like watching baseball—no two films are the same but they flow through each other, all of them, from 1917 to 1966. “Shall We Gather Round the River?” isn’t just Ford’s favorite hymn, it’s a metaphor for watching his movies. You can feel centuries flowing through them. American history, a mix of myth and fact, sentimentalism and cold reality, extreme violence and slapstick comedy—Ford is thoroughly patriotic but his films are always ambivalent, most consistently about this country and how we reckon with our past, imagined and not.

The first shot of Straight Shooting is a striking long shot of a valley full of black cows arrayed in a loose Y-shape. Horses and their cowboys come running up the hill, but we stay with the cows for a bit. Westerns are a surprisingly hard sell for cinephiles my age and slightly older (keep in mind he was Ingmar Bergman’s favorite director, and it’s obvious in all of his 1950s work)—in the minds of many, Westerns begin and end with Spaghetti and Revisionist. In fairness, a poorly-photographed Western is dull, and few other directors, even greats like Raoul Walsh, Howard Hawks, and William Wellman, don’t have the plasma of Ford films running through them. His images are so well composed and striking that he’s never boring, and though his films blur together, this is the point.

Scott Eyman, in his excellent 1999 Ford biography Print the Legend, points out Straight Shooting’s “fascinating foreshadowings” of Ford’s subsequent work: “In the end, Cheyenne Harry touches aspects of Tom Doniphon in The Man Who Shot Liberty Valance, as he experiences a deep sense of melancholy by helping homesteaders who inevitably will destroy his way of life. Harry’s loneliness, his idea of himself as an outsider who can only cross the threshold of a home as a guest, will also be seen in Ethan Edwards in Ford’s great, savage The Searchers.”

Eyman also points out that the film “looks more like a film from 1922 or 1923 than 1917,” and he’s correct: Ford’s talents as a cameraman and landscape composer are already well developed, and though a smaller story on a smaller scale, it’s remarkable that this came out nine years before 3 Bad Men, one of his best silent westerns (later remade as 3 Godfathers with John Wayne, Ben Johnson, and Harry Carey Jr., made as a tribute in the wake of Carrey Sr.’s death in the late 1940s).

Also included is a three-minute fragment of Hitchin’ Posts, a lost 1920 film about riverboat gamblers. It’s a sad segment, ending unresolved with (presumably) the male lead taking his winnings and calling it a day, leaving his buddies and his beau, who ends the film looking as heartbroken and lost. There are video and booklet essays by Tag Gallagher, and a commentary track by Joseph McBride.

Straight Shooting should be a go-to introduction to silent cinema: a breezy 62 minutes, bread and butter story, gorgeous restoration, and the sheer novelty of seeing something so contemporary and alive and moving that was made 103 years ago. Without any of the baggage and bloat of D.W. Griffith (great as he and his masterpiece Intolerance are), Ford offers a brief feature film released just a year after Intolerance that presages the Westerns he’d continue to make through the 1920s and finally return to for life in 1939 with Stagecoach. For fans, it’s essential, just as much as 3 Bad Men, but more importantly, this restoration should be shown to people who’ve tried and failed to get excited about silent films. There’s Sunrise, there’s Lonesome, there’s still The Crowd, but Straight Shooting is much less experimental and avant garde, and it looks like movies made 20 or 30 years later. It’s a miracle, but those are common in the world of John Ford.