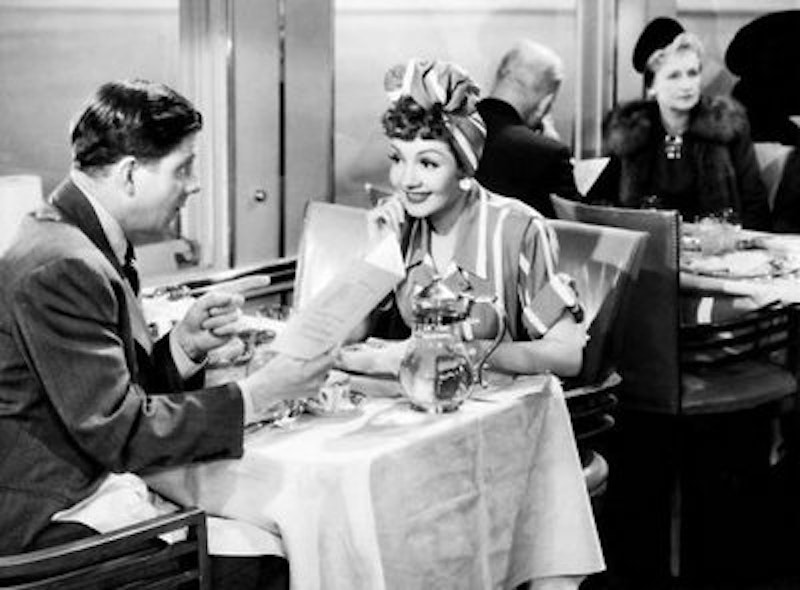 This is part of a series on screwball comedies. The previous essay on The Awful Truth is here.

Before there was Pretty Woman, there was The Palm Beach Story (1942).

A romantic comedy about prostitution was somewhat scandalous even in 1990. Sure enough, Preston Sturgess' classic screwball comedy from half a century earlier is a bit coy about its main characters’ transactions. Gerry Jeffers (Claudette Colbert) isn't a street worker; she's an adventuress in search of a sugar daddy. Yet, while it's less frank than Pretty Woman in some ways, The Palm Beach Story is considerably more forthright in others. In particular, while Vivian (Julia Roberts) is a sex worker, she never seems to be working. Gerry, on the other had, while not officially a prostitute, treats sex very much as a job.

The Palm Beach Story is putatively about love, but actually it's all about money. Gerry is married to Tom Jeffers (Joel McCrea), an unsuccessful would-be inventor. The two are mired in debt—in part because Tom is jealous and morally upstanding and won't let Gerry sweet talk investors. Gerry is sick of not being able to pay her bills and heads to Palm Beach for a quickie divorce. She pays her way through sheer force of good looks. She ends up fascinating the ultra-rich John D. Hackensacker III (Rudy Vallée), and planning to marry him in order to get him to help out loser Tom. But Tom isn't shaken off so easily; he follows her to Palm Beach, and wins her back—though John D. agrees to fund his airport anyway. Happy ending.

In Pretty Woman, Vivian and Edward (Richard Gere) fall for each other almost at once. The client/john relationship is always a prelude to more. For that matter, though we know what Vivian does for a living, we never see her with any other man. In The Palm Beach Story, in contrast, Gerry spends much of the movie extracting money from men with whom she has no intention of falling in love.

To get on the train to Palm Beach, Gerry stands winsomely beside the station attendant checking people through, repeating over and over that her ticket’s lost. Sure enough the boisterous members of the Quail and Ale club notice that she’s young and stunning and offer her an extra berth. It looks like a good deal—except that Gerry then has to travel in the car with the Quail and Ale guys, who are drunken bores. They want her to dance, and when, exhausted, she tries to go to sleep, they lurch into her room to serenade her with glee club tunes. Since she's riding on their dime, she has to be cheerful and gracious, no matter how irritating they get. Gerry's performing what people today call "emotional labor"—she's hired herself out as a servant, to salve male egos, provide an appreciative audience, and perform sexiness, even if she isn't actually having sex with anyone. "You have no idea what a long-legged woman can do without doing anything," Gerry quips to her husband, but the film suggests that the "nothing" long-legged women do can be both arduous and disheartening.

John D. is less of a chore; he's gallant, sober and treats Gerry respectfully. He doesn't barge into her room to serenade her, but organizes a small chamber music ensemble outside her window. But while he's classier and nicer, Gerry's relationship with him is still transactional. She offers him a fantasy, allowing him to think her husband beat her and that she likes to bake. The financial basis of their relationship is made clear to the audience, if not quite to John D., in a Pretty Woman-esque scene in which he buys her a new wardrobe. One of the shop attendants expounds that there’s no pleasure like buying a lovely woman clothes, and John D. agrees. Money isn't exchanged for sex; instead, money is a kind of sexual pleasure in itself.

The film's overt message is that love triumphs over money; Gerry eventually gives back John D.'s diamond bracelet and goes back to true love with Tom. The film presents this as a happy outcome, but it's not entirely convincing. Tom, no less than John D., wants Gerry to be who he wants her to be rather than who she is. He's jealous, controlling and borderline abusive. When she pays his bills, he's angry because she got the money from another man, and when she decides to leave him, he arranges to have the police detain her. In contrast, when Gerry tells John D. she's going back to her husband, he’s stricken, but doesn't try to bully or threaten her, as Tom did when she left him. You end up feeling like Gerry would’ve been happier if she'd followed through on her mercenary instincts, and chosen money over love. Tom's not worthy of her, and while John D. may not be either, at least he can make up for the deficit with cash.

Sex work is often seen as exploitation and debasement because it severs sex and fantasies of romantic love. The point of Pretty Woman is to lift Vivian out of sex work; Edward is Prince Charming saving her from a life of drudgery. Street-based sex work certainly is (often extremely dangerous) drudgery, and as the Quail and Ale club shows, other forms of sex work aren't much fun either. But The Palm Beach Story doesn't make romantic love look like a great alternative. On the contrary, sex work offers Gerry an escape from debt and independence from a controlling man and an unpleasant domestic situation.

The goofy ending of The Palm Beach Story involves the sudden appearance of multiple twins, one who marries John D. after all. The final image of Gerry (or her look-alike) marrying both John D. and Tom highlights the film's ambivalence. Love is supposed to be the romantic dream of Hollywood. But money has its own attractions—not least of those being an escape door from the romantic dreams of Hollywood.