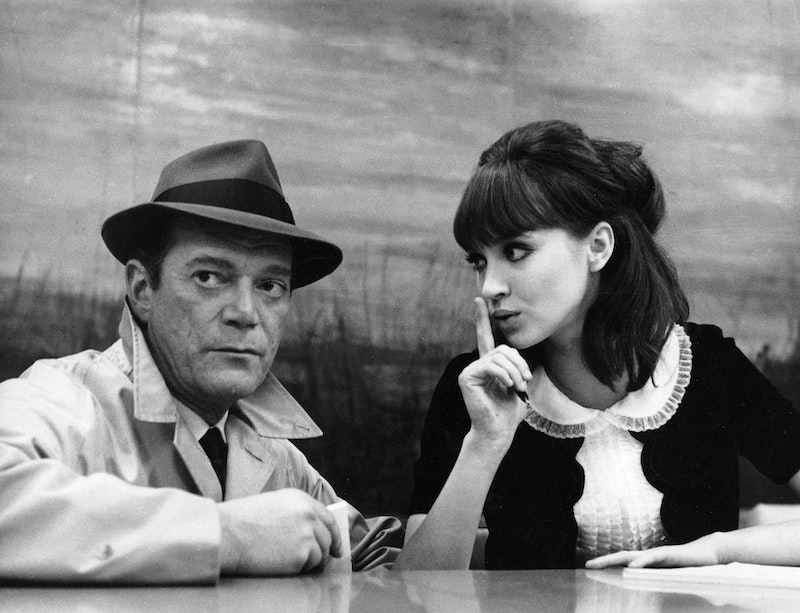 Four men on diving boards facing an indoor swimming pool. Behind them, four armed guards—and behind them, four women in bathing suits. The men stand, they shout their last rebellion, and they’re shot. They fall into the pool. Those still living are stabbed by the women, wielding knives. Lemmy Caution asks, “But what have they done?” A G-Man answers, “They behaved illogically.” This scene hits halfway through Alphaville, Jean-Luc Godard’s DIY sci-fi film from 1965 (a 4K restoration is out this week on Blu Ray and DVD via Kino Lorber).

Godard famously shot the Lemmy Caution project on location, with no futuristic sets or special effects. The otherworld of Alphaville is merely Paris at night, a collection of carefully selected and constructed shots, taking the strict formalism of his previous film, A Married Woman, and applying it to a detective story. Richard Brody calls Alphaville “Godard’s last movie (though not his last film).” It doesn’t call attention to itself or its methods as nearly every other Godard movie does, from the 1960s or not. It's a thrilling movie that isn't sidelined by po-mo exercises and gestures, and when they do appear they're hilarious—especially the score, which has exactly one cue that starts, stops, and repeats dozens of times at random intervals, a piece of errant emphasis.

Alphaville is not only an accomplishment for its methods and its means. Its dystopia runs on “logic” and, presided over by a croaky-throated super computer called “Alpha-60,” is pretty damn close to the panopticon of Facebook, Twitter, and Instagram. In Alphaville, “words have lost their meanings, and meanings have lost their words.” Phrases and expressions are jumbled and unintelligible, single words retain their meaning but, in isolation, are stripped of their power. Anna Karina plays Natacha, daughter of the mad-scientist creator of Alphaville, who struggles to remember the word “conscience.” Alpha-60 knows no such word.

Every room has a Bible (the dictionary), and when Lemmy checks into his hotel, the bag girl strips and asks if he wants a bath with her. He’s nearly assassinated by a nameless thug before jetting, leaving the girl and the hotel behind (for now). Lemmy’s mission and origin remain vague, and as Alphaville declares war on “the Outer Countries,” he takes on the scientists and the super-computer itself that has created a perfectly “logical” society which makes absolutely no sense. There’s no love, the word does not exist. Alphaville ends on a surprisingly optimistic note, with Lemmy and Natacha speeding away, him teaching her the words for what she’s feeling: “I love you.”

More than a mid-decade curio from Godard’s 1960s hot streak, Alphaville is one of the most prescient sci-fi films of the 20th century, presaging our dystopia by 54 years. There are no sets nor studio lights: simply underexposed exteriors shot at night, modernist architecture, creative use of mirrors, and objects repurposed (the heart of Alpha-60, shown frequently in close-up, is a “three dollar Philips fan” and a light bulb. In another ingenious pair of scenes, three condenser microphones on boom stands rove above Lemmy’s head as he’s being questioned by Alpha-60).

Lemmy’s hotel, his clothing, and the mise en scène are contemporary and unchanged. The difference then, and the similarity now, is in the air: the citizens of Alphaville walk around uttering nonsense, most often “I’m fine thanks, don’t mention it.” Alpha-60 is everywhere but mostly invisible, accessible via ergonomic handheld devices. The people running Alphaville don’t appear all that confident, and as with Silicon Valley, there’s a sense that the world has become a runaway train operating on cold, hard, reliable “logic” that nonetheless leads to disaster. The swift extermination of “people who behave illogically” is straight out of Nazi Germany, and though Godard’s obsession with the Holocaust is obvious here, his prediction of a society unable to form meaningful phrases and a general haplessness with technology that has become too powerful is startlingly similar to our own. Not even Fassbinder's World on a Wire (made in 1973 and featuring a cameo by Eddie Constantine in his first reprisal as Lemmy Caution since Alphaville) is as in sync with the times as Godard's haphazard masterpiece. Simulation theory is more popular than ever, but it's still essentially fringe. It floated up near the surface after the 2016 election, but the horror of Alphaville is already here.

The only difference in Alphaville is that there’s no past and no future. We have both but no present. Never mind that Godard didn’t have a script for three days into the early-January shoot, money running out, ideas forthcoming. He may have had to reshoot much of the movie after his stubborn insistence to shoot with no light at night led to 3,500 feet of unusable film. Karina divorced him mere weeks before the shoot, and he made his last prayer in the film’s ending. Lemmy teaches Natacha to tell him “I love you,” and they ride off into the night, the ominous and insistent score all of a sudden out of a Disney movie. All Lemmny had to do to destroy Alpha-60 was read it a poem. If only our way out was so clear and simple. You could make this movie as is today and nothing would change, none of its power would be lost. It’s as inconclusive and elusive as our own mess.