The Farewell is moving, hilarious, and one of this year's best. A- 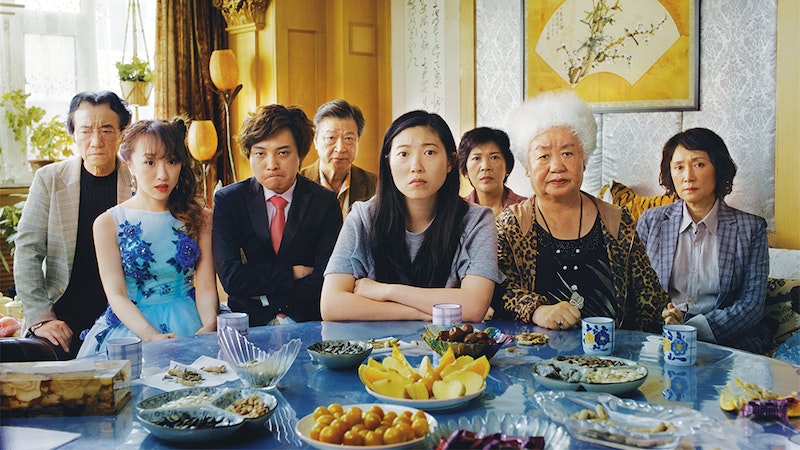 I was prepared for The Farewell to present a fascinating, moving examination of Chinese-American assimilation, family, and letting go of dying loved ones. The Farewell is all of that. But it's also consistently hilarious, and its scenes are filled with some of the most appetizing food imaginable. This is one of the year's best movies to date.

The film is based on a true story experienced by writer/director Lulu Wang, who first told it on a This American Life segment. The movie’s about an aimless, 30-year-old Chinese-American woman named Billi (Awkwafina), who returns to China to visit her beloved grandmother (Zhao Shuzhen), who’s dying of lung cancer. But the grandmother, per local custom, hasn't been told she's dying. Therefore, the extended family must assemble, from the U.S., Japan, and elsewhere, at the wedding of a cousin that's really a stealth, preliminary funeral for the woman they call Nai-Nai.

The film may sound like a high-concept drama, but it also has slice-of-life elements, depicting a real-seeming, lived-in group of people, who haven't been all together in the same place in years. And that's where most of the comedy comes from—distinctive character moments.

It's rare when a film wins raves at Sundance and also lands just as successfully upon its theatrical release, as it's been killing so far in limited release, with per-screen averages that have overtaken those of Avengers: Endgame.

The Farewell is distinguished by a complex and nuanced performance by Awkwafina. She's best known for playing comic-relief parts in movies like Ocean's Eight and Crazy Rich Asians, but here she's a revelation, as a young woman, born in China but having spent most of her life in New York, struggling to find her place in life.

The 90-minute film has a huge cast of mostly Chinese actors, but several of them get wonderful character moments. Other than Awkwafina, the MVP of the film is Han Chen as Hao Hao, the young, befuddled groom in an obvious sham marriage; despite barely speaking, he has a character arc that's a movie unto itself.

The film has another co-star: the food. In just about every scene when the characters are in China, the characters are seated in front of delectable-looking assortments of Chinese cuisine. This might be the most appetizing movie I've seen since Big Night.

The Farewell reminded me a of Good Bye, Lenin, Wolfgang Becker's 2003 German film about a woman in East Germany who falls into a coma in 1989, just before the fall of the Berlin Wall, and wakes up months later. Told that the shock of news like that could kill their mother, her son keeps up the ruse that Communism hasn't fallen, one that includes production of fake TV broadcasts. The tone isn't quite the same, but The Farewell has a similar knack for combining tragedy with humor.