At the height of film noir’s popularity, low-budget studios released just as many thrillers as the majors. 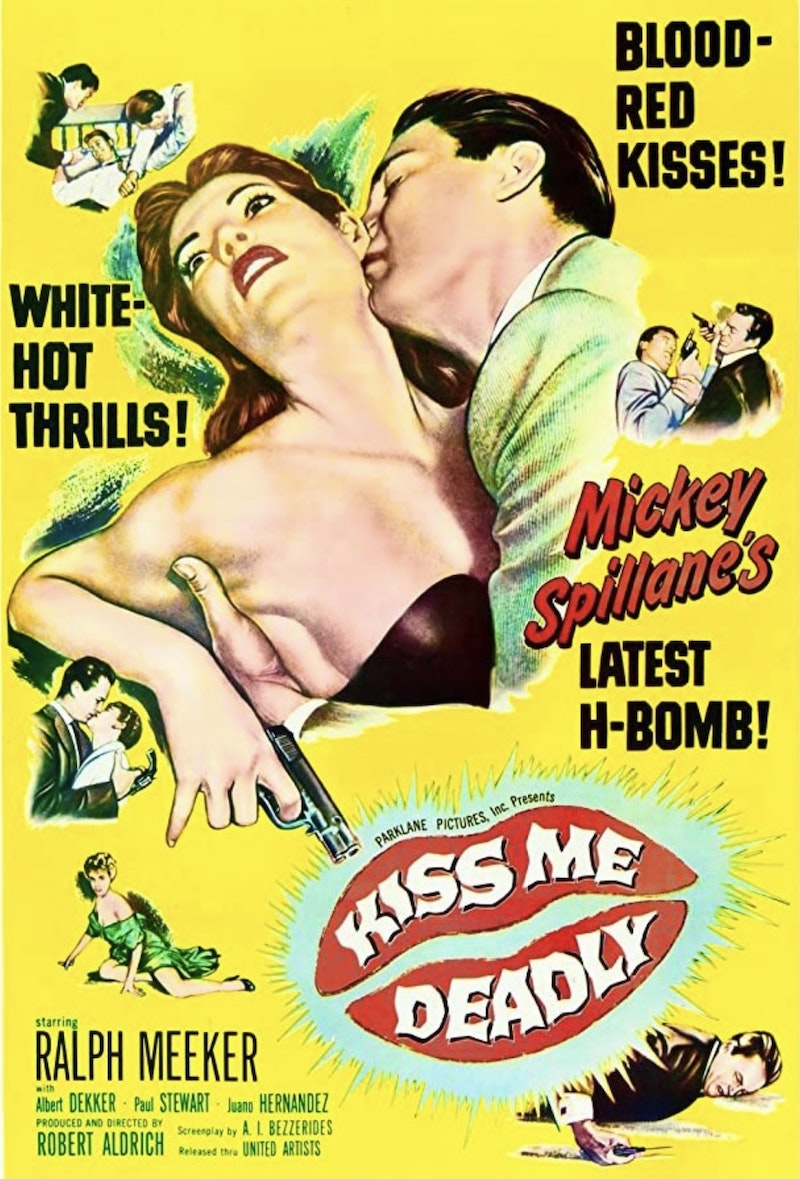 1950s film noir and nuclear bombs only seem like strange bedfellows. Many of the major narratives and cultural touchstones of the Cold War revolved around “cloak & dagger” sketchiness, especially when it came to the dissemination of nuclear technology and other sensitive government secrets. These maneuvers inspired brash acts of treason, Red Scare propaganda, and ambitious crime films that distilled the political tensions shared by east and west. At the height of film noir’s popularity, low-budget studios released just as many thrillers as the majors, causing filmmakers to constantly and competitively push genre parameters. Amoral sadism, sci-fi/horror touches, densely-layered plot threads, and remote locales were thrown in to spice up the typical noir stew of organized crime, con games, alienation, provocative sexuality, and urban pathos.

Shack Out On 101, Experiment Alcatraz, and Kiss Me Deadly were three prime examples of film noir’s take on the social problems and power struggles enflamed by the Cold War’s wildest nuclear nightmares.

Shack Out On 101 (Allied Artists; 1955): This low-budget crime drama opens with a graphic scene of sexual assault that’s difficult to watch. The scene sets the film’s tone as an exploration of reckless amorality and “get rich quick” schemes. A cast of character actors noshes up lines and spits them out with misanthropic glee. Shack Out centers on the atomic paranoia and mind-numbing boredom that plagues a crew of down-on-their-luck wage slaves employed at an all-night cafe located on a remote stretch of beach near California’s Highway 101.

In a career-defining performance, Lee Marvin plays the lead/anti-hero Slob, a poster child for the disenfranchised punk outcasts of the mid-20th century, misfits who were too young to fight in any of the World Wars, and therefore unable to fully reap the benefits of the G.I. Bill, the legacy of the WPA, or any Old Money/upper class clout. An elusive piece of American Piehung just out of their reach even while many others were enjoying financial independence and stability throughout the Baby Boom. Sprightly actress Terry Moore plays Slob’s foil Kotty—a naïve, flag-waving patriot training to take a civil service exam while working part time as a waitress; she believes that the USA can do no wrong. When she discovers that some of her friends and co-workers don’t share her unconditional nationalism all hell breaks loose in a nuclear blast of military secrets, dirty deals, violence, and more violence. As secrecy becomes an infernal power, death becomes fuel for the fire.

Experiment Alcatraz (Crystal Productions/RKO Radio Pictures; 1950): Here’s a prime example of what the movie biz used to call a “programmer.” Clocking in at just under an hour, Crystal Pictures’ sci-fi/noir mutation Experiment Alcatraz could’ve filled in for a few short subjects or newsreels at any given local bijoux’s Saturday afternoon matinee. The plot follows a murder that occurs during the military-funded testing sessions for aradioactive medical treatment formulated to fight the effects of a rare blood disease. When an army nurse (Joan Dixon as Lt. Joan McKenna) is unwittingly implicated in the murder investigation she teams up with a young researcher (John Howard as Doctor Ross Williams) to search for the murderer. Surrounded by diverse locales, wailing electronic sound effects, and creepy scenes depicting radiation blasted human guinea pigs, the search draws them into the lives of the experiment’s seedy ex-con test subjects.

Government secrecy is again a big part of the story. The general public’s ignorance of nuclear science looms even larger, making this film a distinct product of the time when memories of Hiroshima and Nagasaki were still fresh. One scientific misconception stands as a poetic anti-war symbol. The film implies that the science used to create the atomic bomb could easily turn the human psyche into a deadly weapon.

Kiss Me Deadly (1955; Parklane Pictures/United Artists): This seminal Robert Aldrich film was an adaptation of a popular Mickey Spillane novel. It’s a cult fave and one of film noir’s greatest works. A sprawling pile of violence, dehumanization, torture, and causal misanthropy forms its ever shifting plot. Ralph Meeker plays the “hero” private eye Mike Hammer. He’s a hornier, more misogynistic precursor to Harry Callahan, the archetypal rogue cop played by Clint Eastwood in the Dirty Harry films. Much like Shack Out On 101, this film is a prescient hate spew that must’ve given 1950s audiences a jolt. The movie’s conclusion set a bizarre gold standard for countless downbeat endings to come. Kiss Me Deadly is a lot scarier than anything to emerge from the glut of 1950s escapist sci-fi/horror films because it presents a worst-case scenario that could’ve easily become real during the Cold War’s darkest moments. It’s one of the few motion pictures whose relentless insanity is informed by political consciousness.