Anti-Logic of the Eagle 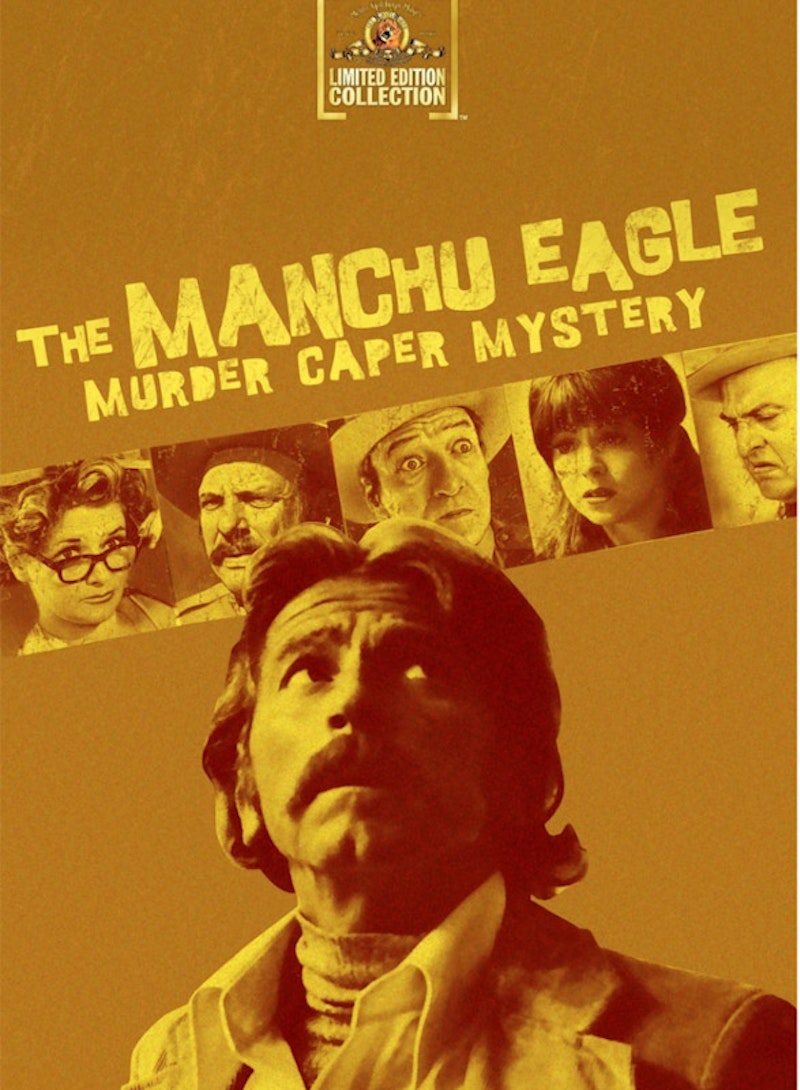 Have you ever wondered if there’s a philosophically challenging movie that doubles as a hard-boiled crime satire about bestiality? A film that fits this description is The Manchu Eagle Murder Caper Mystery. This anomaly was helmed by Ray Danton (better known for acting in The Longest Day, and recurring TV roles on Hawaii Five-O and Wagon Train). Manchu’s weird humor shares as much with the dark comedy of Hal Ashby, John Waters, and Mary Hartman, Mary Hartman as it does with the cornball theatrics of Vaudeville, Hee Haw, and Cannonball Run.

Despite its provocative underground themes, The Manchu Eagle Murder Caper Mystery wasn’t a fringe project. The prestigious Strathmore Productions bankrolled the picture; a then in-its-prime United Artists served as distributor. The cast had Hollywood vets, TV stars, and two former members of the Bowery Boys comedy team, Gabriel Dell and Huntz Hall. As child performers Dell and Hall were part of the original 1935 Dead End stage production as well as many of the subsequent film series that featured The Bowery Boys and other Dead End characters during the 1930s, 40s, and 50s.

The story’s brutal viscera comes to life thanks to inventive cinematographer Bill Butler. His bright colorful style went on to define three of the 1970s most iconic films—The Conversation, Jaws, and Grease. Butler’s keen eye catches every shimmering fleck of dust in Acton, CA, the small town where Manchu was shot on location in 1973 (though the film never saw a release until two years later). Acton is a sunbaked dustbowl filled with middle-agers and senior citizens. The locals wile away the hours sweating profusely and waiting for death. The few younger people lingering around look like they’ve been through hell. Jokes come fast, dirty, and furious. Nonetheless, suspense permeates every scene. Just prior to working as production executive on Manchu Danton directed a trio of fascinating psychedelic horror films—the Manson-inspired Deathmaster, The Psychic Killer (which Danton also wrote), and Crypt Of The Living Dead (an occult potboiler about a sexy god-like princess/vampiric werewolf). Manchu’s ominous aura is charged by the same surreal tension that drove the Danton horror works.

Gabriel Dell plays a grizzled chicken farmer/amateur private eye named Malcolm. Dick Gautier (famed for his role as Himey The Robot on Get Smart) plays sexually-challenged loser Oscar Cornell, the town’s biggest embarrassment. After Cornell’s murdered, Malcolm begins tracking down a rogues gallery of crazy suspects. Infidelities, low-stakes financial scams, betrayal, and imaginary ornithology line the pathway to truth. Though parts of it satirize The Maltese Falcon, this movie is way too weird to be a straight parody of anything.

Nita Talbot was a popular actress with a stellar body of work that stretched from the 1950s into the early-80s. Talbot’s standout TV roles include appearances on the original Untouchables series, Soap, and an Emmy Award winning stint on Hogan’s Heroes. Here she’s cast as a slapstick femme fatale, Oscar Cornell’s schizoid wife Jasmine. Her scene opposite Dell could be film’s greatest anti-seduction.

Anjanette Comer (another great underrated character actress of the 1960s and 70s) plays Arlevia Jessup, a zoned-out waif who was the last person to see Cornell before his murder. Arlevia’s father is the town’s richest resident, the Boss Hogg-esque Big Daddy Jessup (Vincent Gardenia, famed for roles in Bang The Drum Slowly and Playhouse 90’s original 1954 production of “12 Angry Men”). One of the creepiest segments unfolds when Arlevia and her father enjoy a private embrace in a desolate building. The scene clearly implies that Arlevia and her dad could be involved in incest. Comer’s performance bears strong resemblance to the detached psychosis of Sissy Spacek’s work in Carrie minus the supernatural gore.

Will Geer—“Grandpa Walton”—appears as a perverse drug addict/crooked doctor more adept at dispensing hedonistic wisecracks than medical advice. For longtime Waltons fans, Geer’s performance will be a mind-blower. It’s disorienting to see the usually wholesome elderly actor’s eyes sparkle joyously as he shouts insane lines like, ”There ain’t no hope without dope!”

As Manchu concludes there are a few surprises, but plot twists and shocks aren’t central elements. When the true nature of the mysterious “Manchu eagle” gets a climactic reveal there’s no closure. The formulaic mystery tropes are used for absurdity’s sake. They form a contrasting frame device that highlights the picture’s anti-logic, manna for those who love confusion’s perennial euphoria.